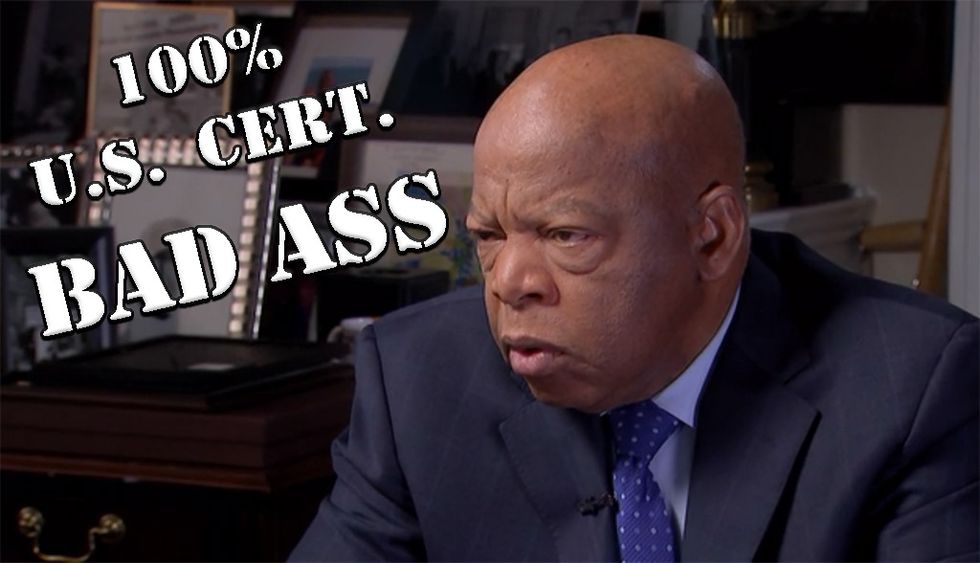 January 16, 2017, is Martin Luther King Jr. Day. It's not Human Rights Day, or Fast Day, and it sure as hell is not Robert E. Lee Day. It is a day that reminds us of a shameful time when we did not recognize one another as equals, and of a man whose life was snatched from him because of that. So, as protesters began marching in Washington D.C. Saturday, it was only natural for the President-elect to call a man who stood with Martin Luther King Jr. a liar and a failure.

On Friday, Rep. John Lewis, a civil rights icon and Wonkette's 2016 legislative bad ass of the year (who even hashis own graphic novel detailing how awesome he is) had an interview with Chuck Todd about Donald Trump. Lewis skipped all the crap and got right to the point: He doesn't consider Donald Trump's presidency "legitimate."

TODD: Do you plan on trying to forge a relationship with Donald Trump?

TODD: You do not see him as a legitimate president? Why is that?

LEWIS: I think the Russians participated in helping this man get elected. And they helped destroy the candidacy of Hillary Clinton. I don't plan to attend the inauguration. It will be the first one that I miss since I've been in Congress. You cannot be at home with something that you feel that is wrong, is not right.

TODD: That's going to send a big message to a lot of people in this country that you don't believe that he's a legitimate president.

LEWIS: I think there was a conspiracy on the part of the Russians, and others, to help him get elected. That's not right, that's not fair. That's not the open democratic process.

That's pretty damning, but it's also true. All 17 U.S. intelligence agencies have confirmed that Russia did indeed play a role in attempting to influence the U.S. election. They might not have sent in some Soviet-era Eurotrash spooks in woolen trench coats to cast votes in some defunct Midwestern town, but they were certainly screwing around with social media and the Internet by inserting bogus stories to distract people from having honest conversations about public policy.

As he is wont to do whenever someone challenges his over-inflated ego, Donald Trump sent out mean tweets aimed at John Lewis first thing in the morning.

Before we go blind with rage and invent new words to swear with, let's point out the extreme irony of Donald Trump's butthurt about being considered illegitimate. Trump himself spent the past eight years bitching about President Obama's citizenship, or lack thereof. It was only in September that he finally admitted that while Obama might be a secret black Muslim terrorist, he was at least born on American soil. "Hillary Clinton started it," he lied to his sycophants that day, "and I finished it."

Of course, Donald Trump could have just been angry that Lewis called Jeff Sessions, Trump's pick for U.S. attorney general, a goddamn racist earlier in the week. Mind you, Lewis didn't throw out insults or blame his disagreements with Sessions nomination on skin color; rather, he cited the historical fact of segregation in Alabama and his own beatings at the hands of the same authority figures Sessions once supported.

But then the 1960s were a different time. While John Lewis was being blasted with fire hoses and getting beaten within an inch of his life, while the rest of poors and patriots were worried about dying in Vietnam, Donald Trump was dodging the draft.

.@repjohnlewis: "We need someone as Attorney General who is going to look out for all of us, and not just for some of us." #SessionsHearing pic.twitter.com/mp0rMJ54r3

So good to see the nation's priorities are being addressed.

House Democrats, Led By John Lewis, Throwing The F*ck Down

Donald Trump could also have been trying to get a little dig in at Lewis for sitting down on the job while everyone else in the House was trying to fuck off for the summer. Lewis, having been arrested 45 times as a non-violent protester, decided to rally Democrats for a sit-in on the House floor to force a debate on gun control legislation. When Speaker Ryan tried to kill the spectacle by gaveling out the legislative session to kill the livefeed from C-SPAN (possibly assuming people wouldn't notice the absence of half of the legislative branch), Congressional members began joining Lewis on the floor to take a load off. Lewis's aim wasn't to force legislation that just happened to be supported by almost everyone in the country, but to simply have an open debate. Instead, they got slapped with fines for taking pictures. Bunch of criminals.

Donald Trump doubled down last night, with more flat-out racist crocodile tears for the hellholes where he thinks all black people live. He shouldn't have bothered. Now there's been a lot of backlash against Trump for his criticism of Lewis. People have been tweeting photos of Georgia's 5th District, which Lewis represents. It also happens to be the city of Atlanta. Apparently, "falling apart" means having the highest median household income in the state, where the largest single sector of employment is construction, and the largest employers include Coca-Cola and Delta Airlines. Of course, all Trump has to do is tweet a series of sentence fragments and adjectives in order to screw a company out of billions of dollars, so maybe we should be careful about what we say.

As to the infuriating and stupid tweets from Trump, it's worthwhile to take the measures of both men: While one likes to extend his hand to grab genitals, the other does so in an effort to keep you standing. Both have a history of causing a lot of trouble, although only one has caused "good trouble," by risking his life, his freedom and his dignity for equality.