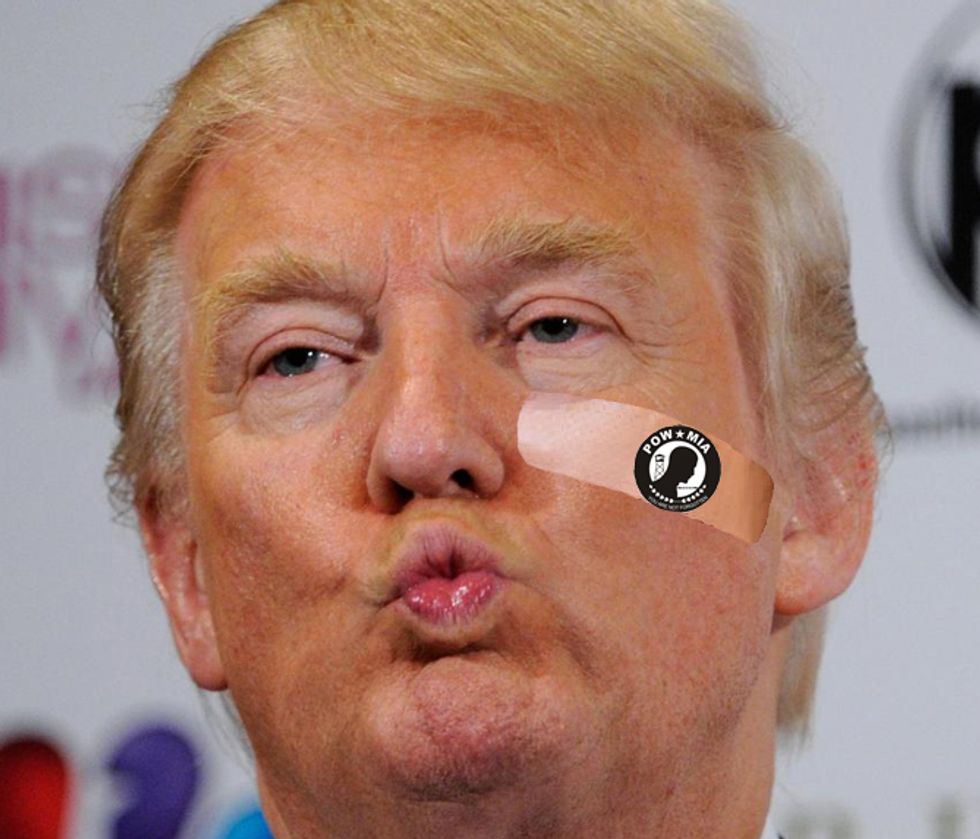 Sure, guys, whatever you want ;)

Ooooh, the Republican Party finally outsmarted Donald Trump! After his repeated threats to run as a third-party candidate, should The Establishment fail to continue giving him the quality scrote-job he demands, Trump has caved to the pleas of the all-powerful almighty Republican National Committee:

A close associate tells POLITICO that Donald Trump plans to sign a loyalty pledge Thursday that would bind him to endorse the Republican nominee, and would preclude a third-party run. Trump made the stunning decision, which he has long resisted, to avoid complications in getting listed on primary ballots, and to take away an attack line in the next debate, the associate said.

And we thought Trump was supposed to be the greatest negotiator IN THE WORLD! He even wrote a book -- the book, in fact -- about how nobody makes deals like Trump makes deals, he is the Michelangelo of deal-making, and that book he wrote about it? Why, it's the greatest book IN THE WORLD, second only to the Bible.

But apparently RNC chair Reince Priebus is even better at the art of the deal than Trump, because he bullied Trump into promising he will definitely not, no way and no how, run as a third-party candidate and steal all the votes away from the GOP's chosen lamb if it is not Trump, DEFINITELY NOT. Genius, that Priebus, and he's got Trump right where he wants him:

And what happens if Trump has his fingers crossed behind his back when he scrawls "DONALD J. MOTHAFUCKIN' TRUMP, YO" in blood next to Priebus's name? Does Trump go to Republican jail, for breaking his promise to forsake all others? Does he get a time-out? Does he have to pay a fine? Does he have to write "I will have no other Gods before the RNC" on the chalkboard eleventy times? Does he have to -- gulp! gasp! SHUDDER! -- go live in Mexico?!?!?

Or does Trump simply laugh to himself about what a bunch of weak pansy losers those RNC guys are, because sure, WINK WINK, he'll sign his name on some silly scrap of paper, no problem! Hell, he's signed marriage certificates that certainly didn't bind him to anything. You guys think your little "loyalty pledge" will make any kind of difference to Trump or stop him from doing whatever the hell he wants, including running as third-party candidate and saying "Jeb sucks!" all day long, every day, between now and November 2016, if that's what he wants to do?

Sure, some in the audience booed at Trump's refusal, during the first Republican debate, to promise that he will support Jim Gilmore or whoever the eventual nominee is. But the reason Trump's fans love him -- besides their certainty that he will Make America Great Again! because it says so on his hat -- is that he is a YOOOOOGE middle finger to the Republican establishment. And the reg'lar American Republicans LOVE it. They don't care what Trump believes, and they certainly don't care what some paper-pusher at RNC headquarters thinks. Hell, poll Trump's supporters and ask them whether they even know what "RNC" stands for. Ask them to pick Reince Priebus out of a line-up of other dudes who look remarkably like stubby penises. Does anyone genuinely believe Trump's supporters care more about the official organization that makes up rules for professional Republicans than about "TRUMP! TRUMP! TRUMP!"?

It doesn't matter to them, and it doesn't matter to Trump. He signs the paper, the RNC promises to stop trying to make up new rules about how he can't be in their debates, or he can't have his name appear on the primary ballots, and everyone wins. Meaning, of course, that Trump wins and laughs and laughs and laughs all the way to the polls. And if he doesn't say, "I, Donald J. Trump, TEN BILLIONAIRE and classiest most terrific guy in the universe, endorse that loser nominee," what's the RNC and the loser nominee going to do? Whine to the party that has a perpetual boner for Trump's anti-establishment rhetoric that Trump isn't playing nice with the establishment? Who's gonna win in that fight, do you think?

He is Donald Trump, Donald J. Trump. He is mincemeating all the other candidates in all of the polls. He can afford to campaign without any help whatsoever from The Establishment. And he doesn't give a single classy fart what those guys say. He will do whatever he wants, and there's nothing they can do about that.