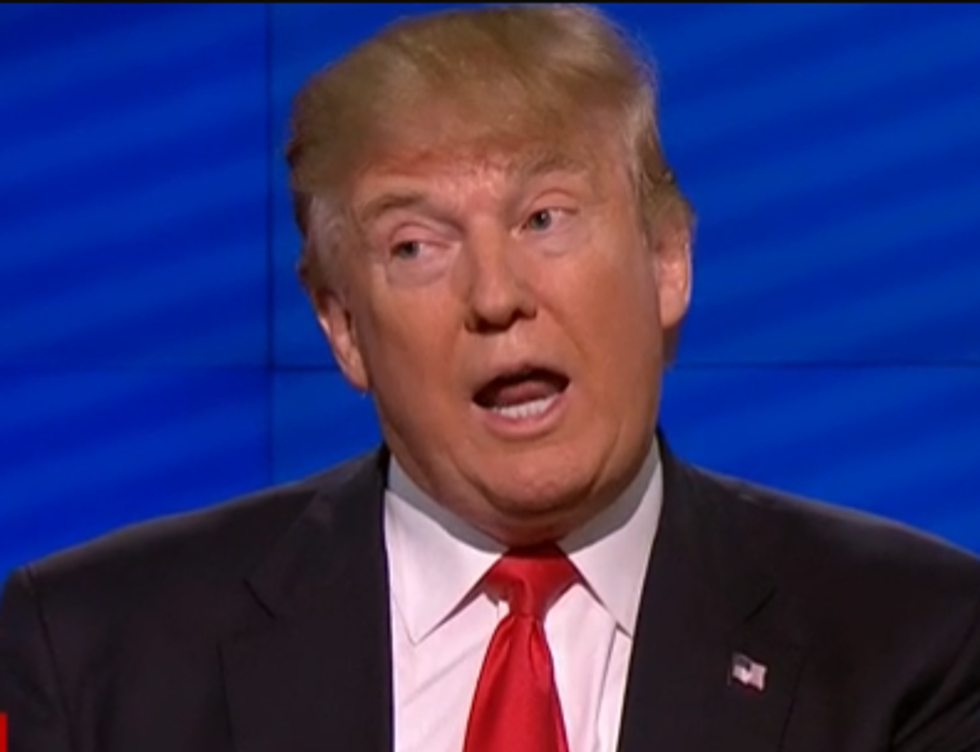 [contextly_sidebar id="c9YIKDMM2uD19I7ZMSsfDS4moYWc5Lh6"]It's a new day in America, because Donald Trump said so, and it's time for the Republicans to act sweet and come together so Trump can Make America Great Again and bomb the shit out of ISIS and make trade deals, tremendous trade deals, you're not gonna believe the deals he's gonna make, he has no problem with the Chinese, he's got MANY friends in China, ET CETERA.

And at Thursday night's Republican debate, there was generally a different tone! The candidates were ... respectful sort of? There was no discussion of Trump's penis this time, so at least it was classier and Safe(r) For Work.

[contextly_sidebar id="DmjPFi1cFZYdlzIKvqumoMIkELjkRKsM"]At his Friday press conference with his new best brain surgeon pal Dr. Ben Carson, Trump said the debate was "elegant ... very substantive" and that it got "great reviews." He humble-braggy added, "I won't tell people that I won, even though I did win." Noted! He also said this very elegant debate would be "a nice way to finish the debate season." We agree! (Because we are tired of liveblogging these dicksnorts.)

[contextly_sidebar id="dtyMJRtJWr5sQYbw0jiUzK7LM3jOI3PW"]Now, it's understandable that Little Marco Rubio shut his yapper for the most part during the debate, since he's about to win second place at coming in third in the Republican primary. And it's understandable that Kasich would be nice, because he's pretty sure you don't even have to win the nomination to win the nomination.

[contextly_sidebar id="tmU39pqG0P0Px8dsHgUkALRVrUwZ8NhM"]But even Ted Cruz acted vaguely human! When Trump pointed out that only two (2) of the people on the stage last night had a shot in hell of winning, Cruz agreed. "Donald is right," he said, "there are only two of us that have a path to winning the nomination, Donald and myself." (This is great news for everybody who hates both of them, which is the entire Republican establishment.)

And hey, Cruz wants to beat The Donald REALLY BAD and he's going to try to show everybody in the remaining states that his punchable Canadian mouth hole is the face America really should show the world, but ... maybe when he loses he could be Trump's vice buttboy maybe, please sir? We are just conjecturing about what might be going on behind Ted Cruz's bedroom eyes, but maybe it is that.

In case you were wondering, these are Ted Cruz's "bedroom eyes."

Let's have a taste of one of the gnarliest throat boogers Cruz flicked at Trump during the debate:

We are ashamed to admit that we actually LOLed at that line. But it was very clear that he was just makin' a silly. No harm, no foul. Give Cruz and Trump a few more weeks and they will be like this again:

[contextly_sidebar id="AhOxUKjA7xFqjJL1AP9v4jOBAnsBzDa3"]However, just to halfway prove that he is still running against Trump, Cruz did come down HARD on all the racist violence at Trump rallies, by blaming it on Obama, of course:

I think for every one of us, we need to show respect to the people. We need to remember who it is we're working for. You know, we've seen for seven years a president who believes he's above the law, who behaves like an emperor, who it is all about him and he forgot that he's working for the American people.

And let me -- let me ask, turn the camera our here. How many of y'all feel disrespected by Washington?​

OH SNAP AND YA BURNT!

Rubio's response to the Trumpenjugen's campaign rally behavior was that he's "concerned about violence in general in this society." And you know who faces the most violence? Cops.

And that ... was basically it? Oh yes, there were other #words in the debate, and they had minor disagreements about this trade policy or that strategery for gutting Social Security, and yeah, Little Marco said he was totally going to stay in this thing and win it because of some old geezer fart in Florida who has an aluminum chair and holds a Marco Rubio sign.

Otherwise it was pretty clear that, unless the RNC finds a way to do the Clinton Murders to Donald Trump, it's his party now. And to Republicans who are DYING inside about that, we can only say HAHAHAHAHAHAHA SUCK IT YOU LOSER GOONS, YOU DESERVE EVERY BIT OF THIS.