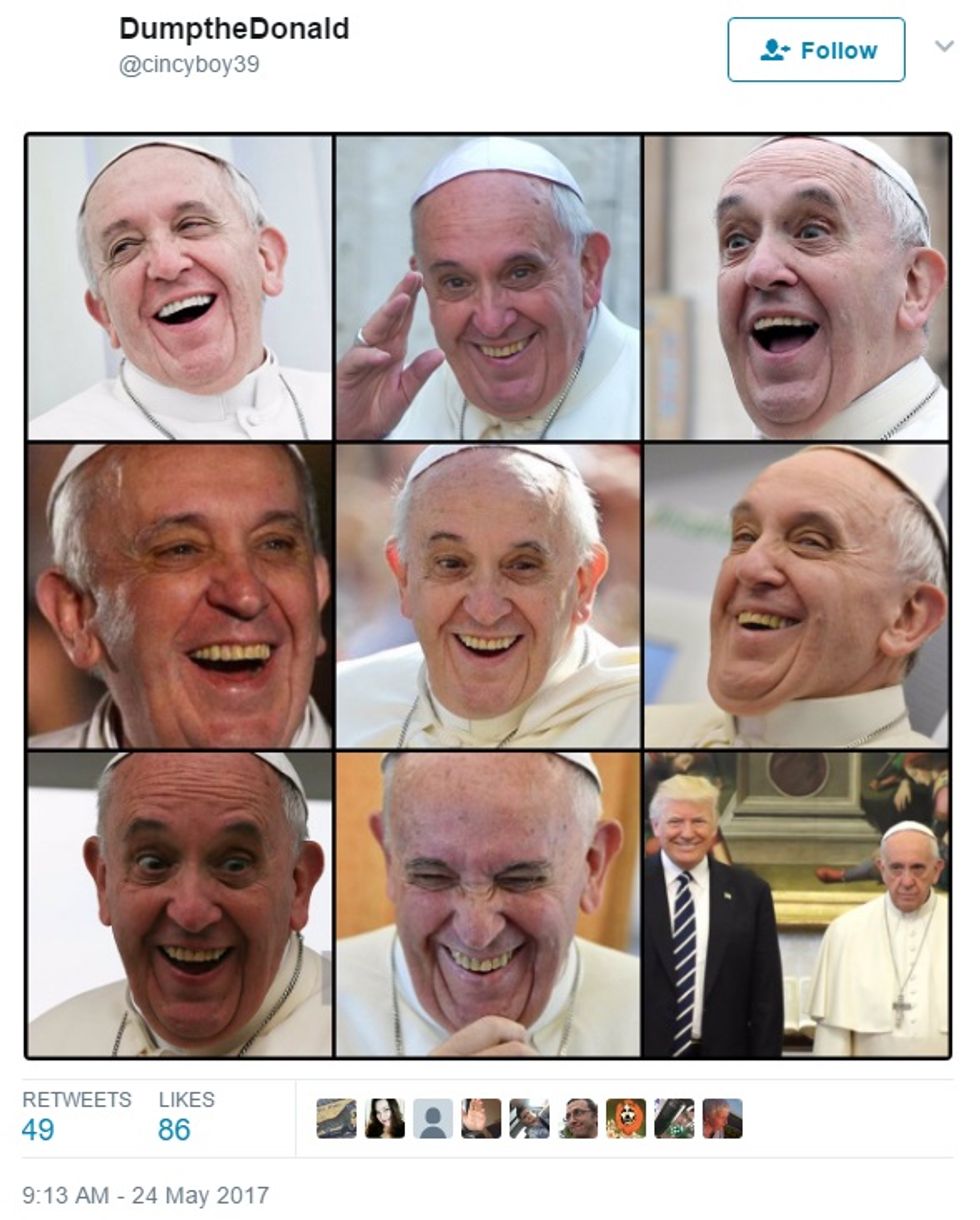 Look at the Pope's face when he looks at Trump. pic.twitter.com/0wvBVesUdP

So Donald Trump met with the Pope o' Rome at the Vatican, and both men managed to remain civil, despite Trump's being the walking embodiment of most of the Seven Deadlies. Maybe Pope Francis didn't smile much, and maybe he spoke to him in Spanish instead of English, but Trump made up for it by smiling far too much and speaking in Trump, and everybody got along just great, with no awkwardness at all, as a few folks noted on the Twitter machine:

The Pope and the Dope have a bit of a history, after all. Back in 2015, after Francis said a bunch of really inflammatory, un-Christian things about taking care of the planet and not being a total dick to the poor, Donald Trump warned the Pope he'd better mind his ways and stop being so turn-the-other-cheeky, if he knew what was good for him. Asked by CNN's Chris Cuomo what Trump would say if the Pope warned him capitalism can lead to the sin of greed, Trump was quick to imagine punching back, because nobody lectures Donald Trump:

Cuomo: He talks to you about capitalism, you scare the pope?

Unfortunately, Cuomo didn't ask whether Trump would order airstrikes to take out anyone messing with moneychangers in the Temple.

Donald Trump Fires Pope For Being Bad At Jesus

Then, after Francis visited Mexico during the campaign last year, he made Donald Trump very angry by suggesting maybe Trump might not be a perfect model of Christ's love, fallen as we all are, you know:

“A person who thinks only about building walls, wherever they may be, and not building bridges, is not Christian,” Francis said when a reporter asked him about Mr. Trump on the papal airliner as he returned to Rome after his six-day visit to Mexico.

Trump, who apparently had only one Pope Script available at the time, again brought up ISIS, because God had clearly failed in His duty to scare the Pope:

If and when the Vatican is attacked by ISIS, which as everyone knows is ISIS’s ultimate trophy, I can promise you that the Pope would have only wished and prayed that Donald Trump would have been President because this would not have happened. ISIS would have been eradicated unlike what is happening now with our all talk, no action politicians.

Trump was also simply disgusted that the Pope would go around talking about what proper Christian behavior is, as if the Pope knew the first thing about Jesus and his friends the Two Corinthians:

For a religious leader to question a person’s faith is disgraceful. I am proud to be a Christian and as President I will not allow Christianity to be consistently attacked and weakened, unlike what is happening now, with our current President. No leader, especially a religious leader, should have the right to question another man’s religion or faith.

It's not clear whether Pope Francis did lecture the president on what it means to be Christian or whether Trump tried to scare Francis by putting a handkerchief over his forehead and shouting "BOO! I'M ISIS! I KEEL YOU NOW!" The Vatican readout of the meeting simply said the two had "cordial discussions" which included "an exchange of views on various themes relating to international affairs and the promotion of peace in the world through political negotiation and interreligious dialogue, with particular reference to the situation in the Middle East and the protection of Christian communities." So maybe a little terrorisms in there. The Pope also gave Trump copies of Papal writings, including his encyclical on climate change; Trump reportedly thanked Francis and promised he'd read it.

Lucky thing for Trump: he's a Protestant, so he doesn't have to go to confession for lying right to the Pope's face.

Ladies and gentlemen, your president.

All in all, Trump was thrilled to meet the Pope, who's a great guy, just tremendous, and maybe he wrote something vapid in the Vatican's guest book, too. Then Trump solemnized the moment with a Tweet:

He's such a man of PEACE, Trump may even invite the Pope to watch his next beautiful missile strike on Syria. Still, it seems maybe things weren't altogether business as usual for Francis:

Oh, and the Pope called Donald Trump a lard-ass, and then he laughed and laughed. The Pope is but a human man, after all.