Donald Trump Prepares To Deport Our Best, Keep The Nazis 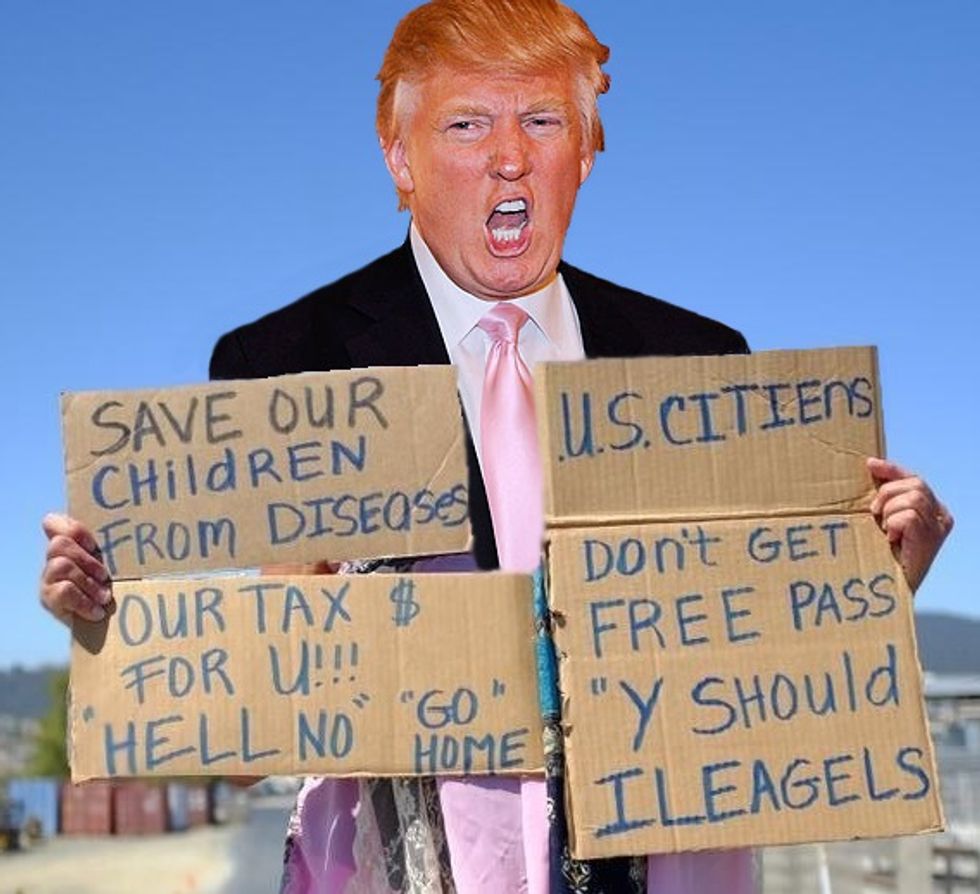 But he'll kick them out with great heart

Donald Trump is preparing to shift the New Cruelty into high gear today, and is expected to formally announce the end of DACA, the Obama policy that allowed undocumented immigrants who were brought into the country as children to come out into the open and get jobs. The New York Times delicately describes the expected announcement, reportedly crafted by chief of staff John Kelly, as "an inelegant solution to an intractable problem": Instead of a definitive decision, Trump will hold off on a final decision for six months and see if Congress can pass some kind of legislation to either end, extend, or make permanent the status of some 800,000 people who trusted the government not to deport them. Given Congress's terrific record of getting things done this year, DACA recipients should probably consider that a notice to spend six months learning Spanish (or Chinese, or Korean, or Serbian...) for the first time in their lives.

Trump has already playfully hinted at their fate:

Translation: I am not now, nor will I ever be, ready to take responsibility for anything. Why did you idiots even elect me?

And following in the great Trump tradition, he isn't even expected to deliver the bad news himself, at least according to the Times:

Mr. Trump will not make the announcement himself. Instead, Attorney General Jeff Sessions will handle it at an 11 a.m. briefing. He will not take questions from reporters.

Frankly, we're surprised Trump isn't planning to send his security goon / head of Oval Office operations Keith Schiller to personally fire all the DACA recipients, but Schiller's probably too busy packing up his own things after firing himself.

The six-month punt by the eight-month cunt has given raving immigration jerks a sad, because just as some DREAMers foolishly believed Trump when he said they had nothing to worry about, the "deport 'em all" crowd expected Trump to deport everyone his first day in office. Mark Krikorian, the head of the Center for Immigration Studies, doesn't see why Trump would put off the important work of Making America White Again:

“It’s not clear what delaying this for six months means [...]

“He’s being pulled in a bunch of different directions, and because he doesn’t have any strong ideological anchor, or deep knowledge of the issue, he ends up sort of not knowing what to do,” Mr. Krikorian said. “I think the fact that they did nothing to it suggests that they had no idea what to do,” he added.

Donald Trump is disappointing a hate group, and isn't that sad?

Trump had to make his announcement immediately, you see, because of a completely arbitrary deadline set by a group of nine state attorneys general who planned to sue over DACA if Trump didn't act by today. Because, gosh, if they sued, then Trump's Justice Department would have to defend an Obama policy in court, and that's simply unthinkable.

So, will Congress fix this, and extend DACA, or even pass an improved version that would allow the DREAMers to become citizens? It could happen, maybe, since lots of Republicans have been making mouth-noises about how ending DACA would be bad. Politico reports that some House Republicans are floating the possibility of "codifying DACA in return for Trump’s sought-after border wall," which should just make everybody happy. There are even a few surprises among the Republicans who are talking about possibly passing a law to make DACA permanent, like rightwing Oklahoma Senator James Lankford, who went the whole We Must Be Tough BUT... route in a statement he released Monday:

It is right for there to be consequences for those who intentionally entered this country illegally [...] However, we as Americans do not hold children legally accountable for the actions of their parents.

obtain legal status if they work, pursue higher education or serve in the military. Tillis has called it a “fair but rigorous path."

Many of those same Republicans filibustered the DREAM Act in 2010, but that was when Barack Obama was president, so you can see their point.

If by some miracle the leadership in both bodies actually brought a DACA bill to the floor, it could certainly pass with votes from Democrats and some portion of non-asshole Republicans. If there's enough public pressure put on Republican members of Congress, it could happen, just maybe, but that would take a certain amount of courage -- just a very little bit -- from Paul Ryan and Mitch McConnell.

What we're saying here is that there's likely to be a real upsurge in sales of Rosetta Stone language-learning software over the next six months.

Yr Wonkette is supported by reader donations. Please click the "Donate" clicky, and get on the phone to your congresscritters today!