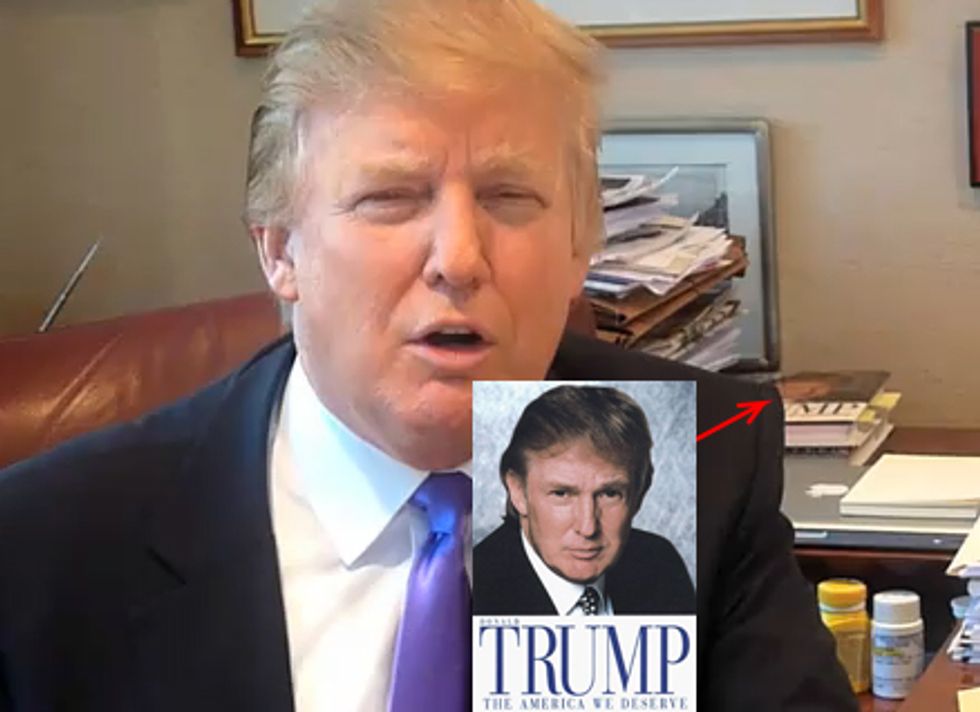 Tipster "Alan S." notes one can see Donald Trump's prescription pill bottles in acouple of his video blogs. But more interesting is something else we spotted sitting on his desk: Trump's book The America We Deserve, which was written up quickly to detail his political views in preparation for a potential Reform Party presidential bid in 2000. Trump's copy appears to be filled with Post-It notes, as if he's had to take notes on the things he's supposed to believe. And, not coincidentally, the media has started to notice the things he wrote in that book don't really match up with what he says on the fake-campaign trail these days.

"We must have universal healthcare," wrote Trump. "I'm a conservative on most issues but a liberal on this one. We should not hear so many stories of families ruined by healthcare expenses."

The goal of health care reform, wrote Trump, should be a system that looks a lot like Canada. "Doctors might be paid less than they are now, as is the case in Canada, but they would be able to treat more patients because of the reduction in their paperwork," he writes.

Even though Trump apparently re-read his old book, he's still making his campaign up as he goes along and has pretty much taken as few issue positions as is possible. But considering he wrote in the book that he supports abortion rights and proposes tax hikes, there's probably not much in there for a guy who now says he loves the Tea Party.

Also, a MACBOOK? This man has a MacBook on his desk? We sincerely doubt this man knows how to use a computer. It must be one of those fake cardboard laptops they put on desks at the store.

And, more often than not in these videos, there's a glass of brown liquid. That must be the magical serum that allows him to be such an unamusing pile of human excrement. [Slate]