Donald Trump Rejects Chuck Todd's 9/11 Reality, Replaces It With His Own 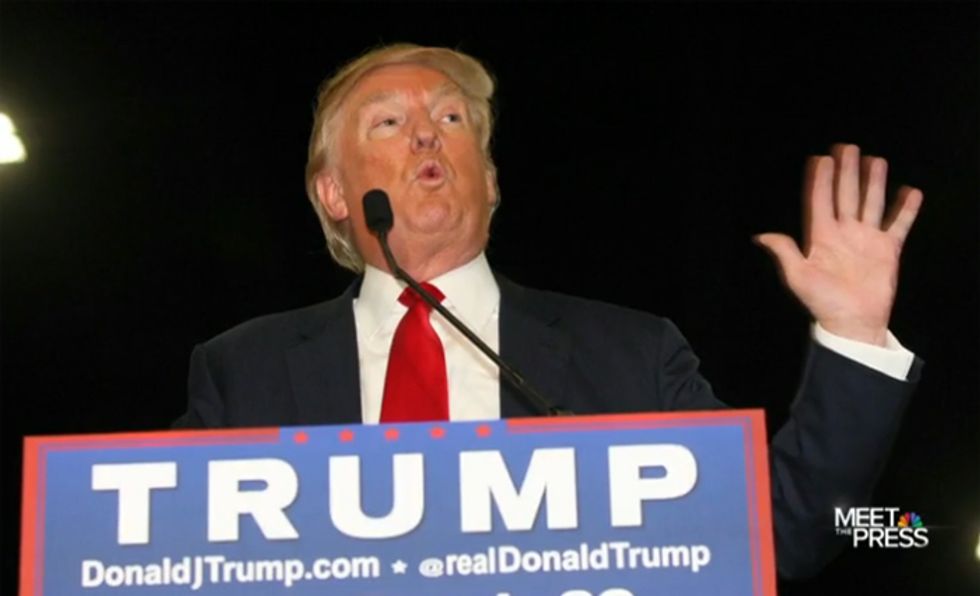 On NBC's Meet the Press Sunday, Donald Trump and host Chuck Todd had a spirited debate about the nature of reality, which left us wishing we could live in an alternative reality in which neither had been born. Todd kicked off the fun by suggesting that since Trump gets quite upset when inaccurate information is reported about him, maybe it's fair of the media to ask him to keep his own statements based in reality.

Ah, but "reality" is such a variable thing, isn't it? Todd pressed Trump to back off his claim he'd seen "thousands" of Muslims in New Jersey celebrating the destruction of the World Trade Center on 9/11, a story that's been debunked over and over. And yet, Trump insisted, it is true, because he saw it on TV and he knows he saw it on TV:

Todd: Nobody can find evidence of this, and more importantly, the article you tweeted out that you said backed you up, that in itself there were three or four different reports that month in New Jersey that said that it was a myth that was spread, that it was a false rumor, FBI, you name it. Where did you see this?

Trump: Chuck, I saw it on television; so did many other people. And many, many people. I've had hundreds...

Todd: In Jersey City? You saw?

Trump: I also heard Paterson. I've heard Jersey City, I've heard Paterson, it was 14 years ago. I saw it on television, I saw clips, ad so did many other people. And many people saw it in person, I've had hundreds of phone calls to the Trump Organization saying we saw it, it was dancing in the streets.

Obviously, nobody ever misremembers stuff, ever! Why does the media keep hiding the tapes of what every Trump supporter knows they saw? We might also ask why nobody's come forward with their home VHS recording of the news coverage of those Muslims dancing in the streets of New Jersey, but isn't the burden of proof on those who say a thing never happened?

Besides, said Trump, rolling out his latest variation on why it had to have happened in New Jersey, Muslims "all around the world" celebrated the attacks on 9/11, so it only stands to reason they did in New Jersey. Sure, maybe there are no photos of these New Jersey celebrations on one of the biggest news days in recent American history, but it happened because Trump remembers it. Trump resorted to the pure logic of the thing: If Muslims all over the world celebrated, why would the ones in New Jersey be any different?

Duh. A Muslim is a Muslim, and one immutable quality of Muslims is dancing in the streets when the World Trade Center collapses. It's in the Koran. We saw a YouTube video about it though we can't find it now. Also, as far as those celebrations "all around the world" on 9/11? That would be one video of Palestinians celebrating in East Jerusalem. Which is not in New Jersey.

Trump knows clips of the New Jersey celebrations are out there, but "for some reason, they're not that easy to come by." Obviously because they've been suppressed in a fit of political correctness, not because the massive celebrations never happened.

Todd eventually got a tad frustrated, and blurted out, "Just because somebody repeats something doesn’t make it true!" Clearly, Todd has never heard the true story of the lady who put her poodle in the microwave to dry it off, which people also are certain they saw on the news. When Todd insisted, "You're running for president of the United States, your words matter. Truthfulness matters. Fact-based stuff matters," Trump quickly put a cork in the stupid NBC man's insistence on a single, knowable reality, especially when we're talking about ancient history like 14 whole years ago:

So there you have it. It had to have happened because Donald Trump is sure it happened, lots of other people saw it too, and it was such a disgusting spectacle that not a single one of them thought to hit "record" on their VCR. Imagine that.