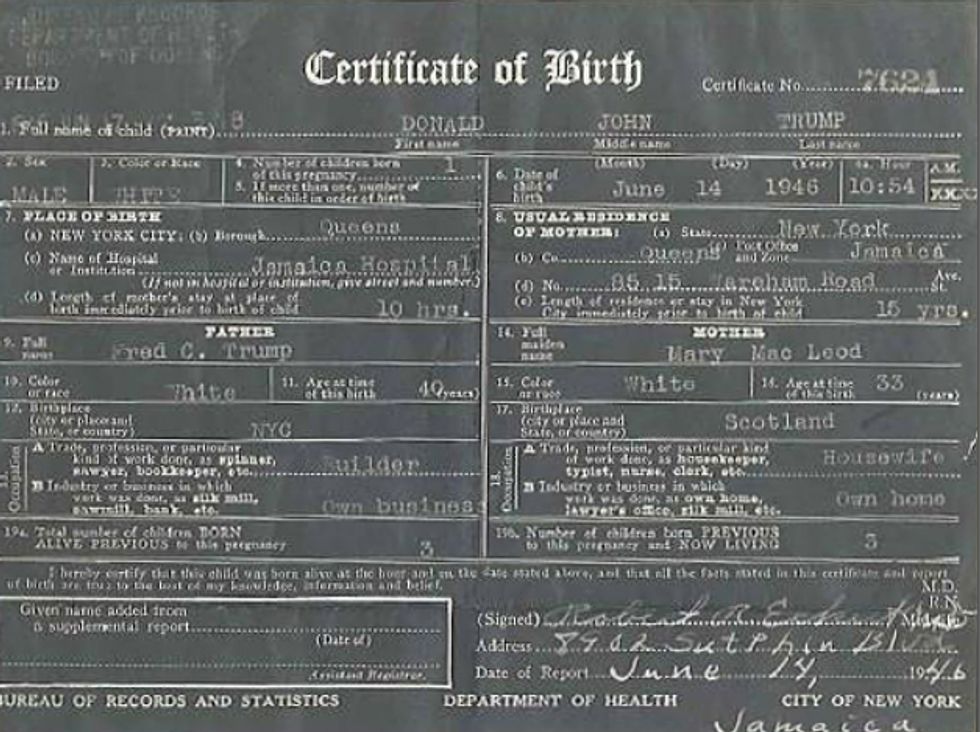 Responding to criticism that thebirth certificate he released Monday was unofficial and easily forged, probable illegal Kenyan Donald Trump released a whole new document yesterday, one that he says is the real official document this time. But why does Trump have so many birth certificates? Will he release yet another new one tomorrow? Where are all these "old" documents coming from anyway? The more Trump denies he's a secret Muslim African terrorist, the more it seems like he is. And there are still more questions raised by this particular document. Why doesn't his mother's name match up with the first one he released? And, most important of all, why does this one refer to him as a "child," when he's clearly a man in his sixties?

On the first document Trump put out, his parents are listed as "Mr. and Mrs. Fred C. Trump." Yet on this one, his father is "Fred C. Trump" and his mother is "Mary Mac Leod." Why did his mother's name change from being the same as his father's to this "Mary Mac Leod" person? Furthermore, why does Wikipedia list Trump's mother's name as "Mary Anne MacLeod," which is surely a third person entirely? This Mary person is said to be an immigrant, mind you, from Scotland, which is a foreign country.

The image came with an accompanying memo from a member of Trump's staff.

You know, most Americans (a.k.a. the real ones) don't feel the need to issue a new birth certificate to the media every day of the week to prove they aren't Kenyan, and they certainly don't hire people to send out long memos explaining why it's complicated but totally normal to have so many alleged birth certificates on hand. Something fishy is going on here. [ABC News]