Donald Trump Rolled By 'Chuck And Nancy' Again? Who Can Even Say! 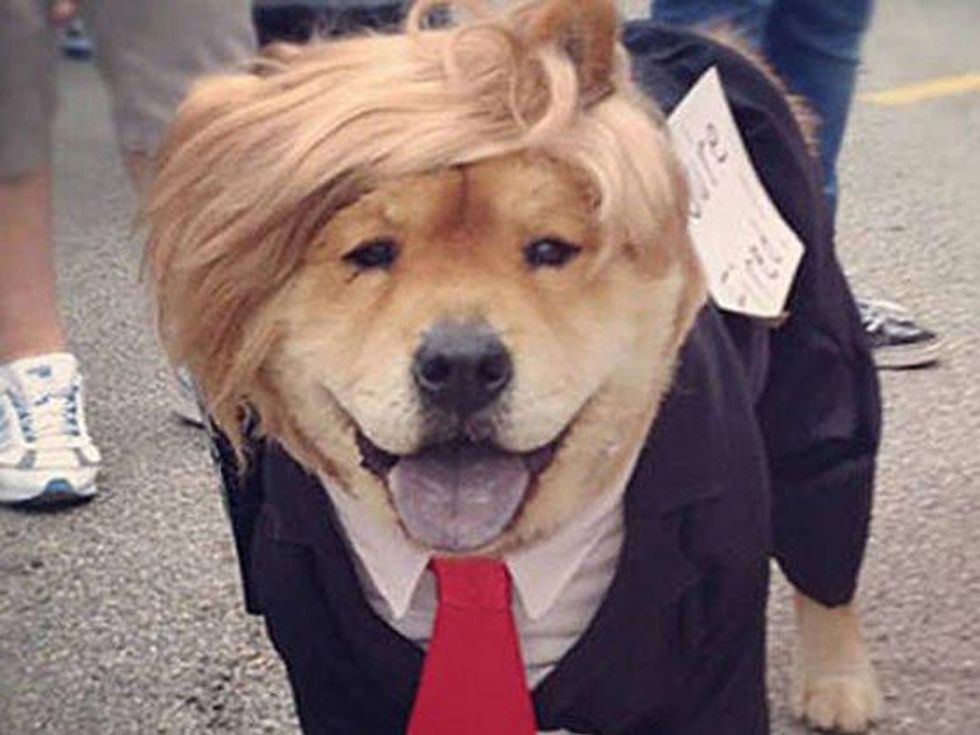 True fact: Someone has to follow the president around with a baggie.

It's hard to tell yet whether the "save the DREAMers" deal Chuck Schumer and Nancy Pelosi said Donald Trump agreed to over dinner Wednesday night is anything but wishful thinking, but since it's a Trump promise, let's just assume he'll break it first chance he gets. Or, more likely, Schumer and Pelosi presented what they think is a good idea for a bill to protect those who'll otherwise be deported when their work permits end, and Trump said "yes" very eagerly with no idea what he was saying yes to. As it was, the White House had already issued a partial retraction of one part of what Schumer said Trump had agreed to before the pixels were even dry on most news websites, and by this morning, Trump had taken to Twitter to deny both that he agreed to anything and that he'd broken anything.

So here's what Schumer and Pelosi said, in a statement released shortly after they left their dinner with Trump (Chinese food and chocolate pie). They had

a very productive meeting at the White House with the President. The discussion focused on DACA. We agreed to enshrine the protections of DACA into law quickly, and to work out a package of border security, excluding the wall, that’s acceptable to both sides.

The first part of that to go by the boards was the bit about the agreement on border protection "excluding the wall," as Sarah Huckabee Sanders tweeted, no doubt shortly after wiping chocolate pie off Trump's face and screaming "excluding WHAT?!" at him:

So maybe the pretense that Trump really cares about the wall will last a while longer, although WaPo also notes that after a meeting earlier Wednesday with House members of both parties,

several Democrats involved in those talks said the president also had made clear that he did not expect border wall funding to be included in a legislative deal on the dreamers. They said Trump was not giving up on the wall but that he emphasized the money could be added to another bill, though he was not specific.

Wall good. Wall only campaign promise Trumpers still cling to, so Wall stay. For now. Until nobody will vote to pay for it, at least.

Trump took to the Twitter machine this morning to declarify the outcome of the meeting:

That wall is really being built, if by "being built" you mean "nothing but maintenance on existing fences." Also, since we just fixed the rearview mirror in our '96 Oldsmobile, we're happy to announce our new Tesla Model S should be delivered any time now. But after insisting there was no deal on DACA, no, no, no, Trump immediately made the case for a deal on DACA:

And some truly magnificent chocolate pie. Whatever Schumer and Pelosi managed to get Trump to say yes-ish to Wednesday night, he was backpedaling on this morning, and any deal would still depend on Paul Ryan and Mitch McConnell agreeing to bring it to the floor. DACA recipients probably shouldn't be bringing home any pets that live longer than a Betta fish just yet.

Even though Trump hasn't agreed to anything beyond a second helping of moo goo gai pan (with extra frosting), it was enough to set WaPo to speculating that Trump is showing "signs of shifting strategy to cross the aisle and work with Democrats in the wake of the high-profile failures by Republicans to repeal the Affordable Care Act." There was even a sidebar story Wednesday night -- now relegated to a much smaller font on WaPo's homepage -- with the optimistic hed "‘There really is a new strategy’: Democrats wary but hopeful on Trump’s outreach." Who are the dreamers here?

Even the possibility of a deal to normalize the status of DACA recipients had rightwingers making funny squeaking noises Wednesday:

Rep. Steve King (R-Iowa), an immigration hard-liner and early Trump supporter, wrote that if reports of a potential immigration deal are accurate, the president’s “base is blown up, destroyed, irreparable, and disillusioned beyond repair. No promise is credible.”

Rep. Steve King Being A Nazi Out Loud Again

Want to really improve Our Culture? Vote out bigots like Steve King.

The folks at Dead Breitbart's Home For Nervous White Men were also in high panic mode Wednesday, even before the Schumer-Pelosi statement, at the possibility that Trump might "choose a legislative deal that quickly legalizes the nearly 800,000 illegal aliens on DACA[.]" Did the piece mention who exactly those "illegal aliens" are, and how they were brought to the USA as children? Don't be silly! They're illegals!

And Ann Coulter? Yeah, She kind of went loopy. Or loopier:

Friend Of Wonkette Charlie Pierce put things in perspective: all that is Trump melts into airheads.

So while we're delighted that Chuck Schumer and Nancy Pelosi managed to get Trump to say "yes"-shaped words at dinner, between his repeated dives into the chocolate pie, we're not expecting much more than a line in another "Trump broke a promise!" feature down the road. He'll ultimately follow the call of his very base Base. It's little more than another case of Trump agreeing with whoever's in front of him at the moment.

Next time, Chuck & Nancy should show up with a Trump Tower taco bowl, really good ice cream, and a nicely typed letter of resignation. And bring a notary.