Donald Trump had him a pretty fine Monday, what with calling Adam Schiff a big old liar and leaker who must be stopped, so why would he limit his ebullient bullshit to Twitter? While visiting Cincinnati in the afternoon to talk about how tremendous the Great Big GOP Tax Cuts For Rich Fuckwads are, Trump offered this intriguing assessment of what it meant when Democrats failed to applaud him at the State of the Union address:

Pres. Trump says Democrats not applauding at the State of the Union were "un-American...can we call that treason? Why not." https://t.co/dMeVjlPoyT pic.twitter.com/CeU2ekh99V

Trump was very unhappy that the Dems didn't even thank him for magically creating a single month of record low black unemployment, or any of the other wonderful things Donald Trump personally bragged about. Shame on them!

So that means they would rather see Trump do badly than Trump do well [...] It was bad energy! You're up there, you've got half the room going totally crazy wild, they loved everything, they want to do something great for our country, and you have the other side, even on positive news [...] they were like death, and un-American. Un-American. Somebody said treasonous. I mean, yeah, I guess, why not? Can we call that treason? Why not? I mean, they certainly didn't seem to love our country very much.

That seems maybe a bit of a low bar for treason, but don't worry, Sarah Huckabee Sanders will soon let us all know the "president" was only "joking" and we shouldn't be so serious, for gosh sakes. He did kind of smile while saying it, after all.

Mind you, the new Trump definition of "treason" couldn't have applied to all the times Republicans sat in complete silence during Barack Obama's State of the Union addresses, because for one thing he had already committed treason several hundred times just by taking office while having a fake birth certificate, and also shut up, traitor. It's really quite remarkable how far we've come since the 2016 campaign: 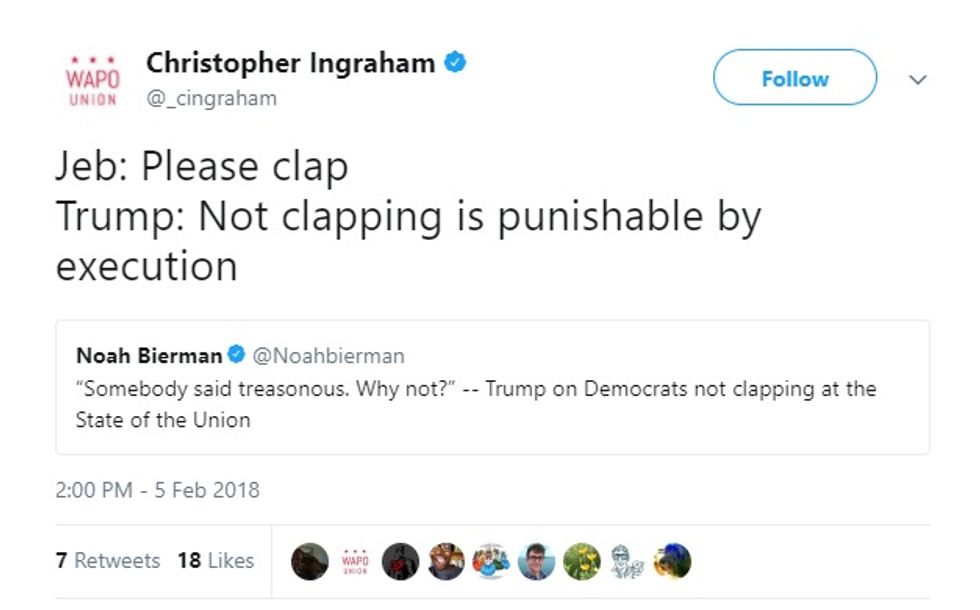 The Experts Weighed In on whether you can call that treason, since people were wondering: 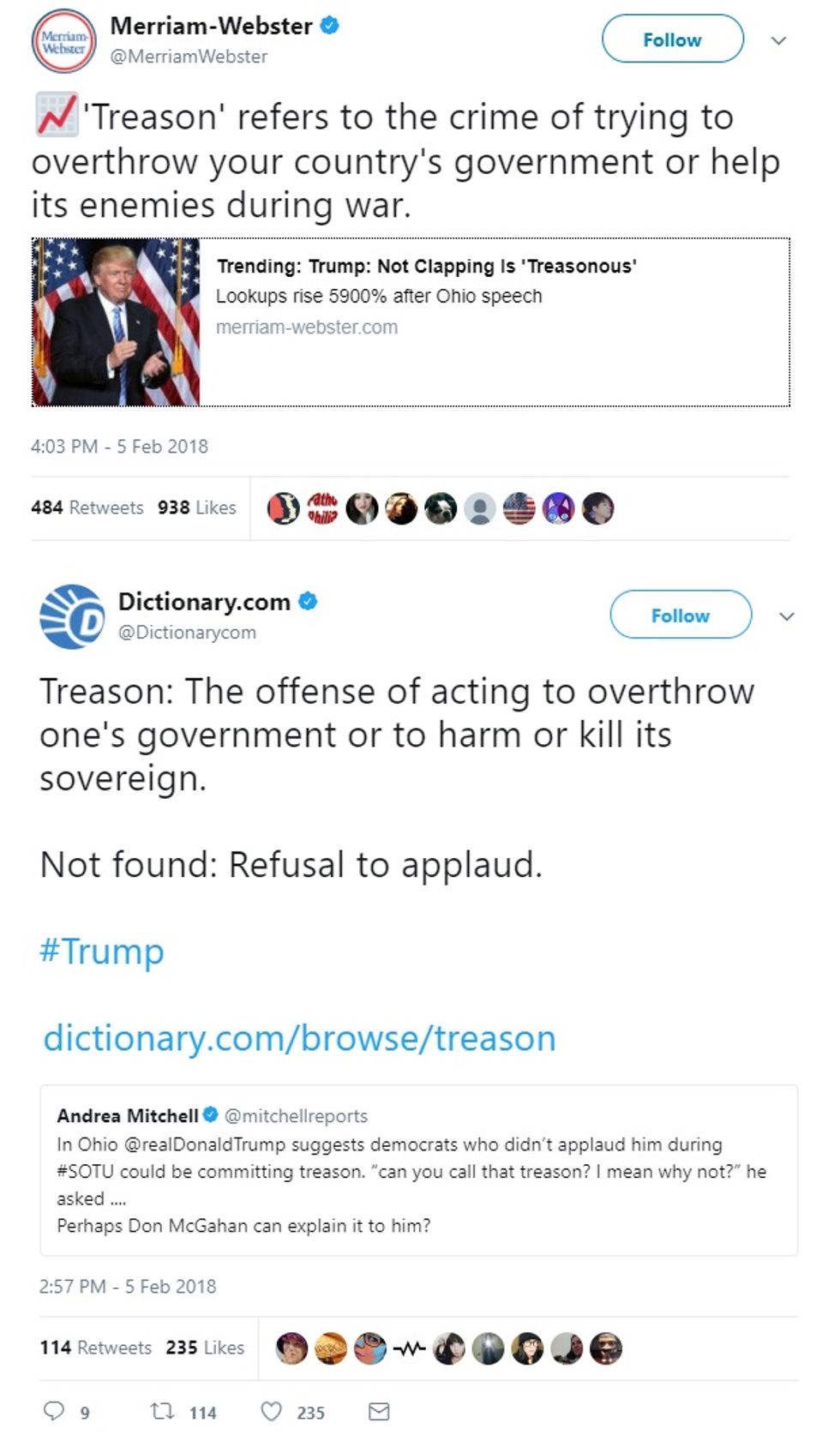 Trump also graciously accepted credit for the model behavior of the sacrificial human beings offered up for our entertainment at Sunday's National Traumatic Brain Injury Festival, where none of the tributes knelt during "Panem Uber Alles." Clearly, the personal force of his patriotism put those ruffians in their place: 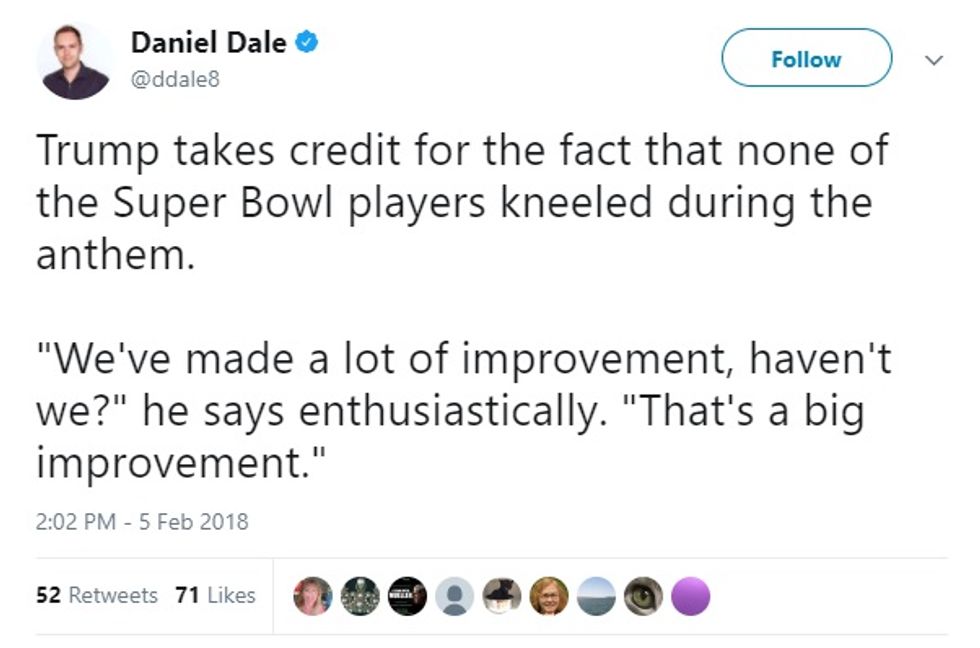 While he was at it, Trump also decided to praise Devin Nunes -- without saying the name -- for his amazing Encyclopedia Brown work with the wet fart memo, in one of those inexplicable Trumpian logic-train derailments:

Oh, yes, and during what's not supposed to be a campaign trip, because it was funded by taxpayers, not the RNC, Trump also warned that Nancy Pelosi and Chuck Schumer "want to raise your taxes" and are out to wreck America, so the midterm elections are absolutely vital:

Then while Trump left the stage, the stock market dropped a thousand points, which made for one hell of a chyron:

Not to worry, though -- the Dow popped back up at least partway right after that: 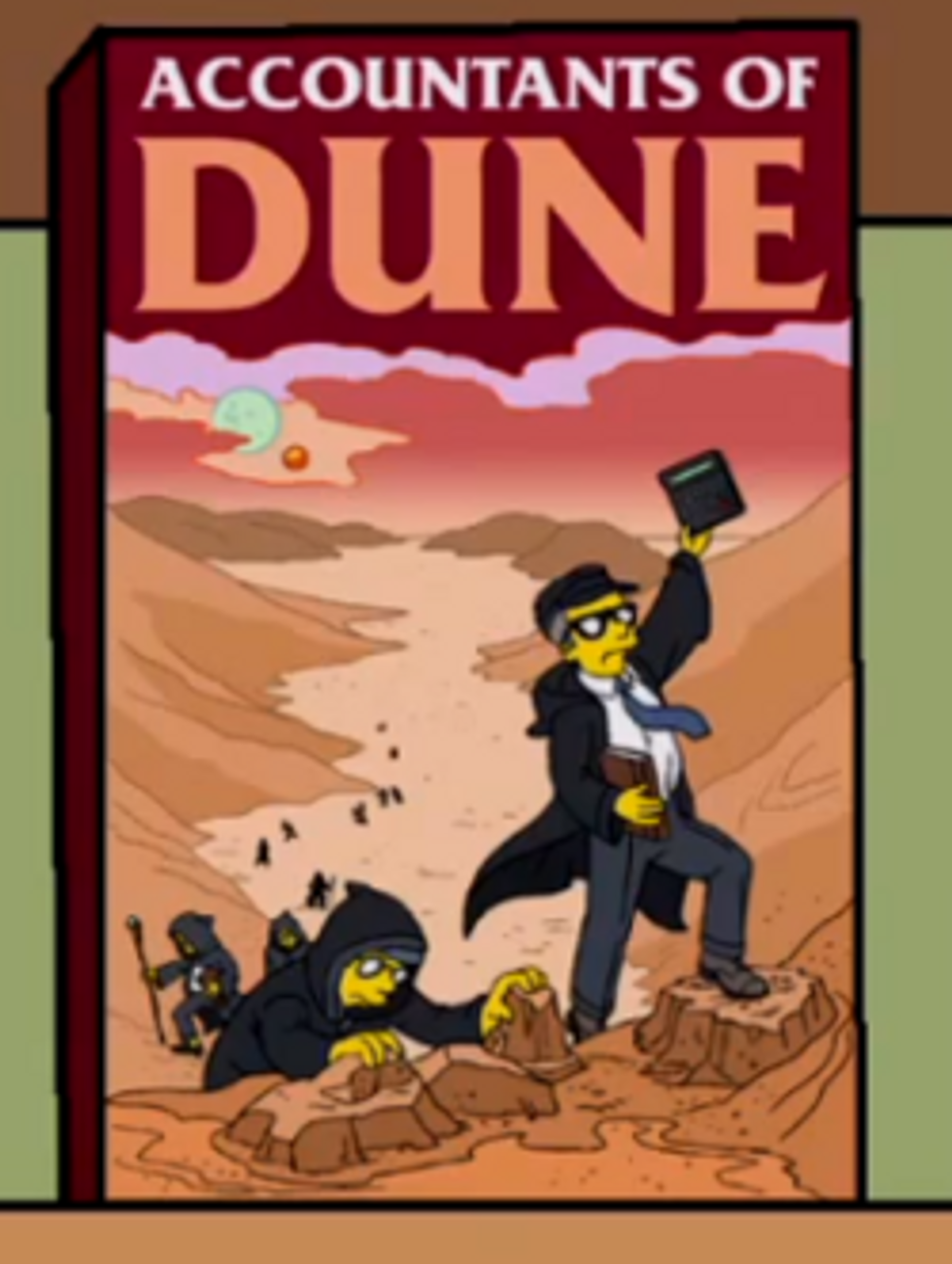 If all that stock market yo-yo-ing has you worried, we suggest you recite to yourself the "Bene Gesserit Litany against Fiscal Fear," from Frank Herbert's famous science fiction masterpiece Accountants of Dune:

I must not fear.

Fear is the mind-killer.

Fear is the little-death that brings total obliteration.

I will face my fear.

I will permit it to pass over me and through me.

And when it has gone past I will turn the inner eye to see its path.

Where the fear has gone there will be nothing.

Only I will remain.

Also, the stock market is not the economy.

If you still feel stressed, go watch the brand new baby keedies at Kitten Academy, where Momcat is resigned to being a milk source: 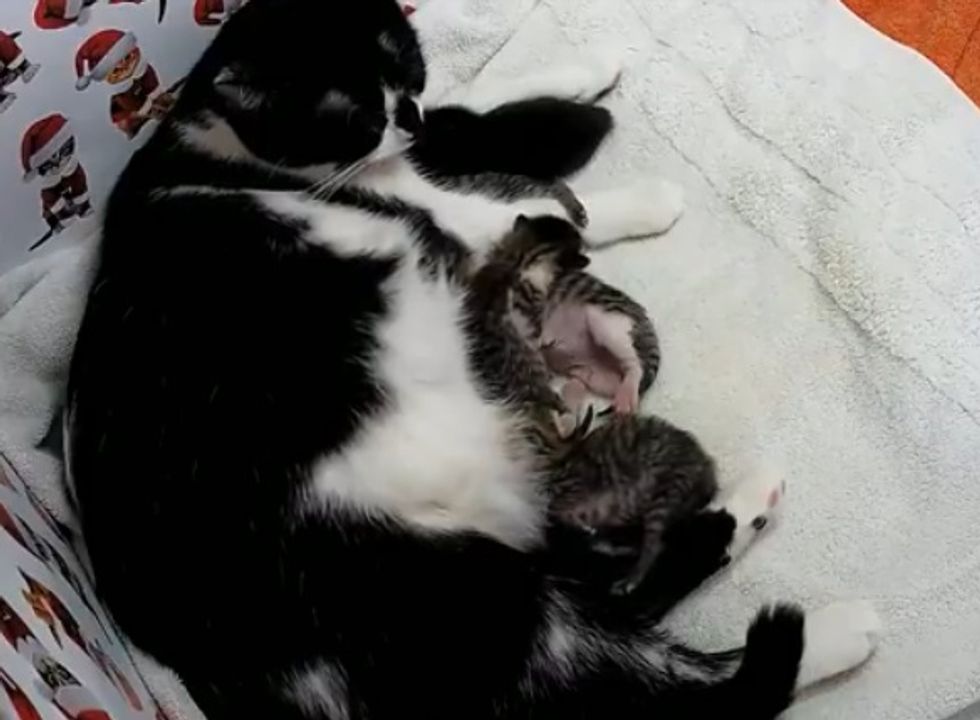 Trump Pardons Every Criminal He Knows, Which Is A Lot Of Criminals