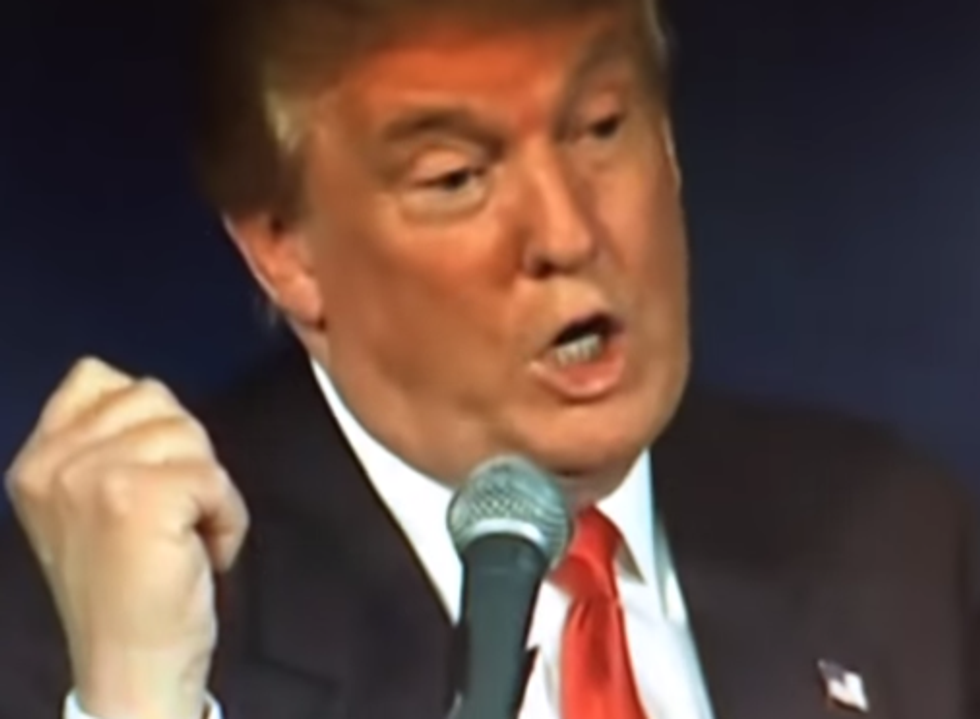 Donald Trump, Wonkette takes it all back. You are the best Republican candidate probably since Abraham Lincoln, who wouldn't have had to deal with that pesky Civil War if he had just gotten the Messicans to build a YOOOOOOGE wall around the traitor states and posted signs everywhere that said "Camp Moron." Speaking to voters in Lindsey Graham's South Carolina, Trump thought it would be a good idea to say all kinds of bad words about Sen. Graham, and then give out his personal cell phone number, in case anybody in the audience was looking for a good sexxxy time with the Senator or something. Trump was mad because Graham called him a "jackass," which is just mean.

Is there video? OF COURSE! And honestly, we HATE TRANSCRIBING THINGS, and Trump is a rambling pain in our ass, but we are going to do it for you, because this shit? Epic:

Probably, seems to me not as bright, honestly, as Rick Perry. I think Rick Perry is probably smarter than Lindsey Graham, but what do I know? Actually I said about Rick Perry that, he said I shouldn't be debating, because my spirit is wrong for America. All I want to do is make us rich, save your Social Security, stop having everyone rip us off and I have a bad spirit, right? So he said, "He shouldn't be allowed on the debate stage." I said to myself, "He shouldn't?" And then I tweeted -- you know I have many millions between Twitter and Facebook, it's great. It's like owning a newspaper without the losses, it's incredible. Incredible!

So I tweeted that Rick Perry should have to have an IQ test before getting on the debate stage. And people said ... today I got called a jackass by this guy [Graham]! Then I said to myself, "Hey, didn't this guy call me like four years ago? Yes." He called me four years ago, three, four years ago, Lindsey Graham, I didn't even know who he was. He goes, "Mr. Trump? This is Senator Lindsey Graham? I wonder if it would be possible for you to call Fox." Because you know, until I ran I had that little thing I'd do, just for fun, "Fox & Friends" is so great, Brian and Steve and Elisabeth. They're great people, right? They're great!

Gotta cut in here to point out that Trump totally gay-voices when he's quoting Graham. And also, the "Fox & Friends" Couch Of Stupid are not "great," they are abject morons. MOVING ON:

And he wanted to know whether or not I could give him a good reference on "Fox & Friends," okay? He wanted to know would I do that. And of course he wanted to know whether or not he could come and see me for some campaign contributions. And you know, I give to everybody. People said "Oh you gave to the Democrats!" Of course I did, because I'm intelligent. "You gave to the Republicans! You gave to Hillary!" ... Of course I did. When I want something, I get it. I'm a bus-, I was a businessman until a few months ago! When I want something, I give here, and that's part of the problem with our system. Until a couple months ago, I could have anything, believe me. If a Republican wants, if a Dem, I give. When I need something I call. "Hey, how ya OOH! Mister Trump, SIR, how are you? What can I do for you?" Say, "Nothing really, be at my wedding, make sure, please, okay?" Or whatever I want!

Must point out that this is the face Trump makes when he describes what people are like when they are calling and asking if His Greatness could possibly do something for them, because he is Donald (Trump!) Trump, and he gets whatever he wants, all the time, whenever he wants:

Part of the problem we have, see with me? I don't need anybody money. [sic THROUGHOUT] Nobody has to give to me! People are sending me money anyway, I said you don't have to bother, please! Don't bother, don't give me any, I don't NEED any money. "Whatever you can do." I'm saying to myself, "What is this guy, a beggar?" [He is back on Lindsey Graham now.] He's like begging me to help him with "Fox & Friends." So I say, "Okay, and I'll mention your name." He said, "Could you mention my name?" I said "Yes, I'll men-." And he gave me his number! And I found the card! I wrote the number down, I don't know if it's the right number, let's try it. 202-867-5309 [not the actual number he gives].

Yes, that was the part where he gave out Graham's phone number, because, IF YOU'RE KEEPING UP, Rick Perry is a stupid pussy, and Lindsey Graham needed help with Fox News, and he is also a stupid pussy, so here is his phone number, you should call it. Yes, in the video, he says the actual number, but we won't type it, because #standards.

He gave it AGAIN! And then he says, "I don't know, give it a shot!" So, of course, people have given it a shot, because that's the maturity level of this 2016 Republican primary, thanks primarily to Donald Trump. If you want to hear what happens when you call Graham's cell number, click here, or don't, it's boring.

We can't believe we are about to say this, but we actually feel bad for Lindsey Graham and all the other Republicans in the race right now, for having to deal with this shit. Oh wait, no we don't, this shit is hilarious, KEEP IT GOING.