Donald Trump Takes Out His Jesus Thing, Waves It At Christian Voters 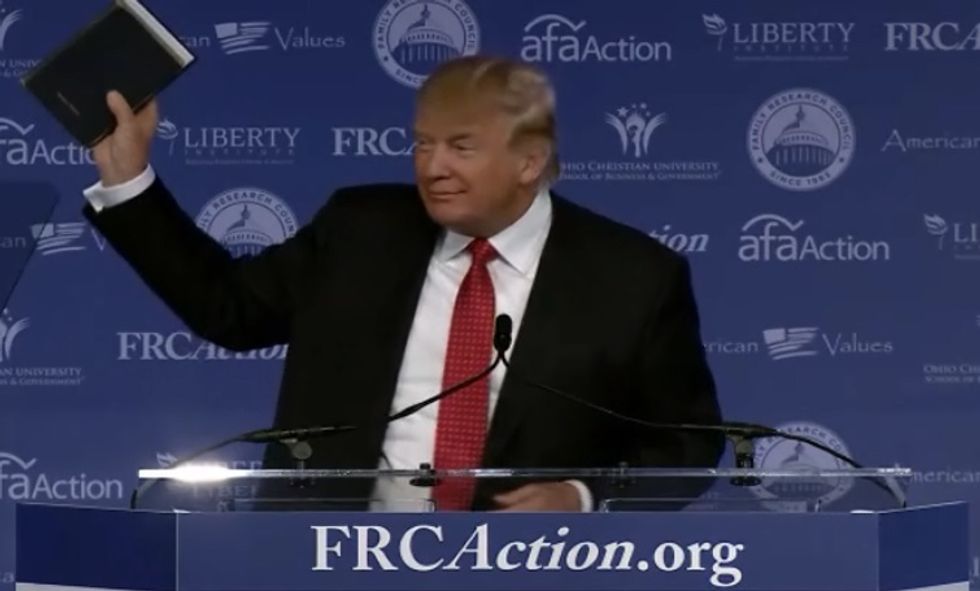 Donald Trump brought his circus act Friday to the Values Voters Summit in Washington, the great annual Jesusthon sponsored by the Family Research Council, the "pro-family" group that used to employ Josh Duggar. Trump turkey-danced his way through the same lines we've seen over 9000 times, only with a couple of extra reminders that he was talking to the Professionally Saved crowd. We recorded it anyway, because maybe you needed 23 minutes of that voice to set your teeth on edge.

Trump continued playing his new cute trick: beyond simply saying that the Bible is his favorite book -- whatever the hell is in it -- he actually pulled out a Bible and showed it to everyone with an expression on his face that looked an awful lot like he thought he deserved a cookie. He showed off his childhood Bible, noting that his mom had written in it, which means he's a genuine lifelong Christian, just like the thumpers in the audience. It's a nice book and looks like it's still in near-mint condition. Someone please pat Donald on the head, or he'll never stop looking at us so expectantly.

Most of the talk was his standard free-associating stump speech, hopping from topic to topic like a hyperactive flea. He got a smattering of applause when he mentioned John Boehner's resignation announcement, and at one point, he went after the latest Republican to rise a bit in the polls: "You have this clown, Marco Rubio ... I’ve been so nice to him.” The crowd booed; we're guessing that the boos were for Trump's rudeness, but who knows, maybe they were booing Rubio? (Or just saying Boo-urns?) Trump's pretty sure they had to be booing Rubio, because he's terrible on immigration, just terrible. "Talk about weak on immigration! Nobody weaker."

Otherwise, it was the usual pile of Trump crazy, with a few extra mentions that Obama is bad for "us Christians." Slag on China, which is killing us, slag on Japan, which is also killing us, and also slag on Mexico, and did you know Trump wants to build a wall?

There is no real logic to a Trump stump speech. If you've seen him talk a few times, you know what all the components are, like a kid's box of Lego blocks that have scraps of the misshapen cars and airplanes the kid made yesterday. A few pieces end up in different places, but it's all the same chunks Trump has been fiddling with over and over. For the sake of the Values Voters crowd, Trump tossed in an extra promise (again, not even new) that he'll save Christmas from America's secular overlords (RightWingWatch was kind enough to snip just that dumb part):

Yes, we'd have to say that it's been a little over nine months since we heard someone yelling "Merry Christmas ... NOT 'Happy Holidays!'" from spittle-flecked lips. And as a helpful reader noted the last time we mentioned Trump's disgust toward any business that says "Holidays" instead of "Christmas," that could get a little complicated for him:

It almost feels like there's a word missing there... Hmmmm... could it be...SATAN?

And then the music came up and Trump the Magic Christian jauntily walked into the wings, satisfied that the rubes bought every word of it.