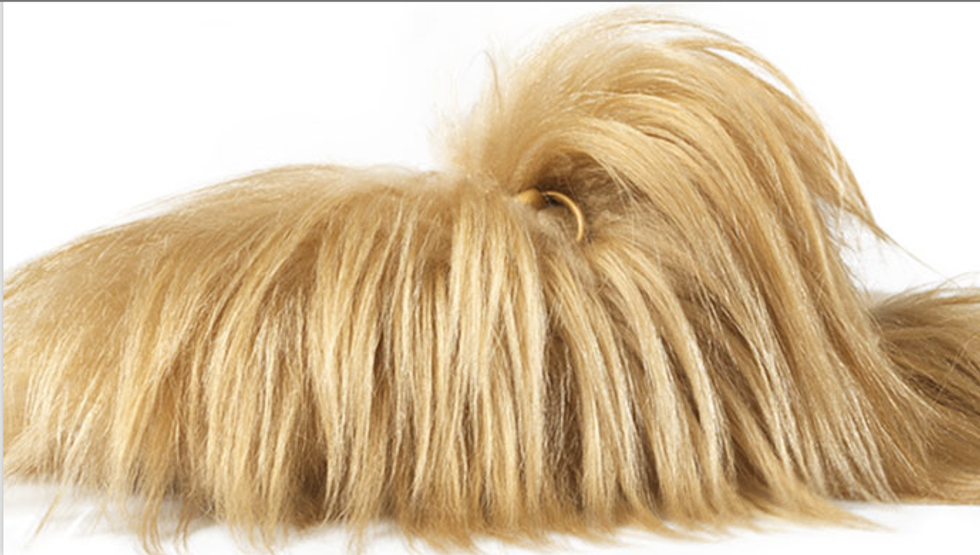 This is actually way prettier than Donald Trump's hair.

Graydon Carter is the editor of Vanity Fair and he would like to say some storytime to you right now:

In the early 90s, we photographed Trump and his soon-to-be wife, Marla, in Palm Beach. At one point, Marina Schiano, our style director, decided that the Loro Piana cashmere sweater she had given Trump to wear wasn’t right and asked him to take it off. Trump refused to pull it up over his head, not wanting to muss his confection of hair. So one of the assistants on the shoot had to get scissors and cut the sweater up the back.

We know Trump probably got some hair plugs because he's insecure about his  everything, and we know from his ugly buildings that the man has no class, no style, and is definitely not cut out for the fine New York society he's always wished to be a member of. But is there a working mirror in his house? His hair looks like a pomeranian died, went to hell and made wet diarrhea in it all at the same time. This is just a #CosmetologyFact.

But he thinks it's pretty. (?!?!) Of course, we all know the story how about how Trump's hair may be an Oedipal tribute to his mommy, Mary Trump, who had this hair:

The point of this post is that Graydon Carter's November editor's letter in Vanity Fair is BLISTERING and OMG and LOL and other adjectives too. Carter is no fan of Trump's and he makes it clear, by sharing all kinds of fun times stories about Trump from days gone by. We will share you two more of them, and then we will say go read the story for your damn self.

Here's one, from when Carter worked at Spy magazine in the '80s:

At one point we sent checks for $1.11 out to 58 of the “well-known” and “well-heeled” to see who would take the time to endorse and deposit the checks from a firm we called the National Refund Clearinghouse. The ones who deposited the $1.11 checks were sent 64-cent checks, and the ones who deposited those were sent checks for 13 cents. This being in the days before electronic deposits and such, the exercise took the better part of a year. At the end, only two 13-cent checks were signed—and we couldn’t believe our good fortune. One was signed by arms trader Adnan Khashoggi. The other was deposited by Donald Trump.

Graydon Carter also makes fun of all the poorly worded, badly spelled, thin-skinned insults Trump has tweeted at him, the same reward Trump bestows on all "who have not kissed the ring on his tiny finger." He really likes Trump's tweet about Waverly Inn, Carter's restaurant in New York, which says the restaurant is "worst food in city":

No, it’s not the sort of witty repartee you expect from a man running for the highest office in the land. Still, I suppose I should be flattered that Trump follows my interests so closely. Just so you know, the “Waverly Inn—worst food in city” quote features prominently at the top of our menu.

Hahahahahahaha, we already were a big fan, but we like Graydon Carter so many bunches more now.

At the end of his letter, Carter gets all serious about the "short-fingered vulgarian" -- you know Graydon coined that, right? -- running for the White House, and it is awesome, but we won't ruin it because the letter deserves to be read in its entirety. So you will do that right now, GOOD-FUCKING-BYE, POST OVER.