Donald Trump Thinks The Mafia Is Libeling That Nice, Safe, Healthy Asbestos. This Is A True Story. 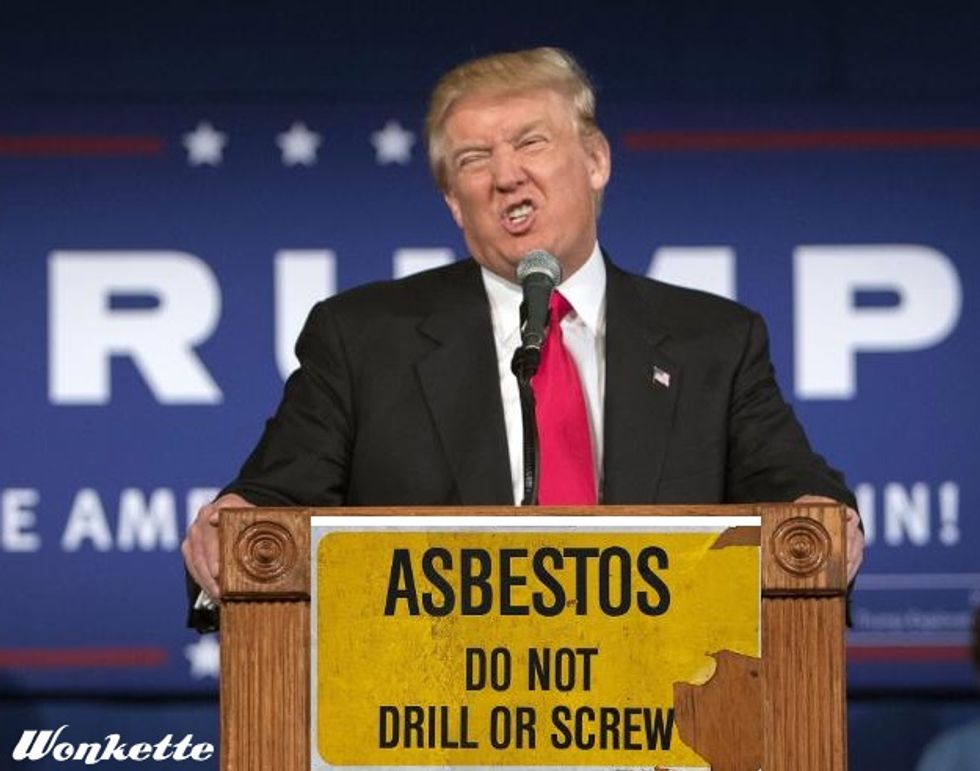 Always good advice for dealing with this guy

After of course Wonkette, our new favorite feature on the interwebs is this series of brief stories at Mother Jones called The Trump Files, where every day until the election they'll share some fun tidbit from the life of the Republican Nominee for the Highest Office in the Land. Today, a look back at the time Donald Trump explained to America that asbestos is nothing to worry about, and you can believe him, because he broke the glass ceiling in the building industry. With his hair. Which is a fire hazard.

Trump explained the true truth about asbestos in a 1997 book with the catchy, not at all derivative title Trump: The Art of the Comeback, where he told Americans they shouldn't believe the hype about the supposed health problems associated with asbestos, which is "the greatest fire-proofing material ever used." While those pussies at the Occupational Safety and Health Administration might insist -- as job-killing bureaucrats would -- that "asbestos is a known human carcinogen" that "can cause chronic lung disease as well as lung and other cancers," Donald Trump got straight to the obvious truth: Asbestos is wonderful and perfectly safe, so the only people who would ever say otherwise are either hooked up with or duped by the Mafia:

I believe that the movement against asbestos was led by the mob, because it was often mob-related companies that would do the asbestos removal. Great pressure was put on politicians, and as usual, the politicians relented. Millions of truckloads of this incredible fire-proofing material were taken to special "dump sites" and asbestos was replaced by materials that were supposedly safe but couldn't hold a candle to asbestos in limiting the ravages of fire.

It's impossible to know whether Trump thought he was making an incredibly funny joke with that "couldn't hold a candle to asbestos" line, which was so hilarious we coughed up a bloody chunk of lung.

Trump knew for a fact that asbestos is "100 percent safe, once applied," and that it just "got a bad rap." This is not a statement that is entirely what you could call "true." Asbestos is only safe when it's in perfect condition and not shedding any fibers -- which it tends to do when disturbed. (As does Donald Trump.) Those crybaby worrywarts at OSHA say the sprayed-on asbestos materials commonly used to fireproof buildings "readily release airborne fibers if disturbed," although more solid materials like flooring or roofing shingles containing asbestos aren't likely to release airborne fibers. Unless of course they're "subjected to sanding, sawing and other aggressive operations." And when does anyone ever saw or sand stuff in a building? The spoilsports also say there's "no 'safe' level of asbestos exposure for any type of asbestos fiber." You can readily see how that's all a Mafia plot.

To his credit, Trump apparently stopped short of claiming the Mafia also wanted to remove asbestos because it keeps them from burning down that nice little shop you have, shame if anything happened to it.

Also, MoJo points out, Trump knows a thing or two about the tyranny of good hardworking real estate billionaires being oppressed by the health mafia and its bizarre preference for the "health" of the illegal immigrants Trump hired:

Polish construction workers who worked on the construction of Trump Tower sued Trump, with some telling the New York Times that "they often worked in choking clouds of asbestos dust without protective equipment." The contracting company used by Trump hired the Poles -- undocumented immigrants who were working off the books -- at only $4- to $5-an-hour, dramatically less than the wages of union members working on the same site. Some of the workers charged they were paid even less. The case was settled in 1999, but the terms are sealed.

Donald Trump has continued to make important pronouncements about science and health, like his discovery that windmills are killing all the eagles and that global warming is merely a scam designed to give China an economic advantage over the USA, because if there's one thing American climatologists love, it's all that money they get from China:

Trump concedes global warming may be making ocean levels rise around his Irish golf course, but you can't prove to him it's not merely out of the North Atlantic being spiteful at his plans for the US to leave the North Atlantic Treaty Organization.

We suppose this would be a good time to be grateful Mr. Trump doesn't own a tobacco company.