Donald Trump To Be Law And Order President, Execute All Black Teens Not Playing Checkers 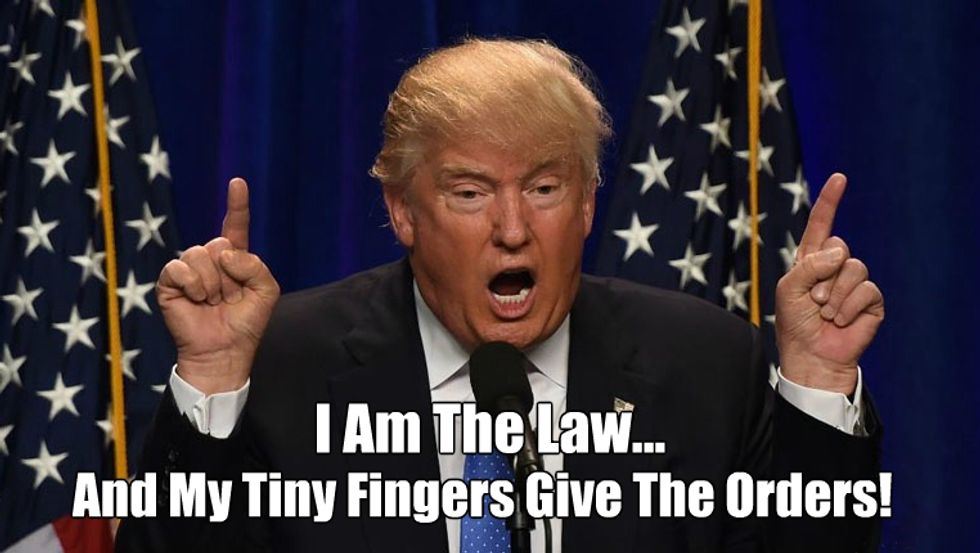 Donald Trump decided Monday he was 1968-vintage Richard Nixon and declared himself the "Law and Order candidate" at a speech in Virginia Beach, Virginia. Or, more accurately, since he was speaking from a teleprompter, first he declared everything he had to say, then he looked out at the audience and declared it again, bigly. The speech was originally supposed to lay out his plans for reforming the Veterans Administration, and eventually got around to that, but it was rewritten with plenty of vague Get Tough On Crime language after the killings of five police officers in Dallas last week. Here's the whole miserable thing, complete with an introduction from some guy who looks like Baron Harkonnen from Dune, if you're masochist enough to watch it all (we only watched Trump, which was bad enough):

Trump praised the slain Dallas police officers, calling Dallas "an attack on our country" (happily, he didn't suggest retaliatory bombings of the shooter's hometown of Mesquite, Texas) and said "we've also seen increasing threats against our police and a substantial rise in the number of officers killed in the line of duty. Very big rise." Which is a terrific line to appeal to a nation mourning a terrible attack in Dallas, but doesn't actually turn out to be true: the Washington Post points out that "Intentional attacks on police officers are at historically low levels under President Obama."

Data from the Officers Down Memorial Page, which tracks law enforcement officer fatalities in real time, illustrates the point. During the Reagan years, for instance, an average of 101 police officers were intentionally killed each year. Under George H.W. Bush that number fell to 90. It fell further, to 81 deaths per year, under Bill Clinton, and to 72 deaths per year under George W. Bush.

Under Obama, the average number of police intentionally killed each year has fallen to its lowest level yet — an average of 62 deaths annually through 2015. If you include the 2016 police officer shootings year-to-date and project it out to a full year, that average of 62 deaths doesn't change.

The Post notes that officer fatalities due to shootings only are indeed up, but the number of officers killed by shooting is generally low to begin with, so a single high-casualty tragedy like Dallas looks like a huge increase when framed in terms of percentages. Thankfully, unless you're Rudy Giuliani fulminating about all the violent rap music, there's no reason to think we're likely to have more Dallas-type mass shootings of police.

Not that mere reality is any reason to prevent Trump from framing the issue in the most apocalyptic terms possible: He called America's police the only thing that "separates civilization from total chaos and the destruction of our country as we know it." Silly us, we thought we had one or two other institutions that kept us from going all Lord of the Flies, but if Trump says it, it must be so.

Trump then slammed "politicians and activists who seek to remove police or policing from a community" as terrible people who would hurt "the poorest" in those communities, although we frankly haven't seen anyone actually calling for the abolition of police -- we watched the "Hamsterdam" story arc of The Wire, so we know better. Most of the wild-eyed radical proposals we know of are for reforming policing, not withdrawing it, but Trump certainly didn't do himself any harm arguing against those stupid straw activists. Then it was time for the Law-N-Order red meat:

We must maintain law and order at the highest level, or we will cease to have a country. One hundred percent, we will cease to have a country. I am the law and order candidate. Hillary Clinton, on the other hand, is weak, ineffective, pandering, and as proven by her recent e-mail scandal, which was an embarrassment, not only to her, but to the entire nation as a whole, she's either a liar or grossly incompetent. One or the other. Very simple.

Personally, it's probably both.

But that's not all! in addition to his Nixonian appeal to law-n-order, Trump also cribbed a little bit from George W. Bush's campaign, with a line that is as transparently empty as it was when Bush used his version of it:

Bush's "compassionate conservatism" line, of course, was fibbing about the "compassion" part, while Trump didn't even mention conservatism, while still lying about having compassion for anyone but Donald Trump and maybe Ivanka. And we all know what a firm believer in compassion Trump is, with his hilarious imitations of disabled journalists and his regular calls for protesters to be roughed up. Still, Trump went on, to be compassionate, you must first have Order:

But you can’t have true compassion without providing safety for the citizens of our country. Every kid in America should be able to safely walk the streets in their own neighborhood, without harm. Everyone will be protected equally and treated justly, without prejudice.

Donald Trump Reminds Us: Black People Not Allowed In Park

We remember what a big fan of equal justice for all Donald Trump is, like when he called for the "central Park Five" to be given the death penalty. Even after they were exonerated and it was conclusively proven they'd been coerced to sign fabricated confessions, Trump just knew they had to be guilty of something, because they were black teens in a park. Man knows all about prejudice, that's for certain. He probably isn't too hot on equal justice for Muslims, either, since they want to kill us all. We'll have to wait for another of Trump's off-script rambles for those details to get mentioned.

Trump did at least make a glancing reference to "the tragic deaths in Louisiana and Minnesota," which were bad, very bad, and need to be addressed with some good old Trumpian vague adjectives. Those tragic deaths, he said,

make clear that the work must be done to ensure -- and a lot of work -- that Americans feel that their safety is protected. Have to do it! We have to get better! Better, sharper, smarter!

You will no doubt be astonished Trump made no mention of the race of the Americans who died tragically, or the names "Alton Sterling" and "Philando Castile," or even any mention of the detail that their tragic deaths resulted from being shot by police, because why would he go and be divisive like that?

So Trump has taken another move from the Nixon playbook -- as Rachel Maddow noted Monday night, this makes the third, following his "secret plan" to end the war and his appeal to the "silent majority":

So... Trump's resigning in shame? Yay?

We can hardly wait for his Trump's announcement that he knows absolutely nothing about that third-rate burglary at the Watergate Hotel, or his denials of the bombing campaign in Cambodia. Still, it should be fun when he goes on Laugh-In to say "Sock it to ME?"