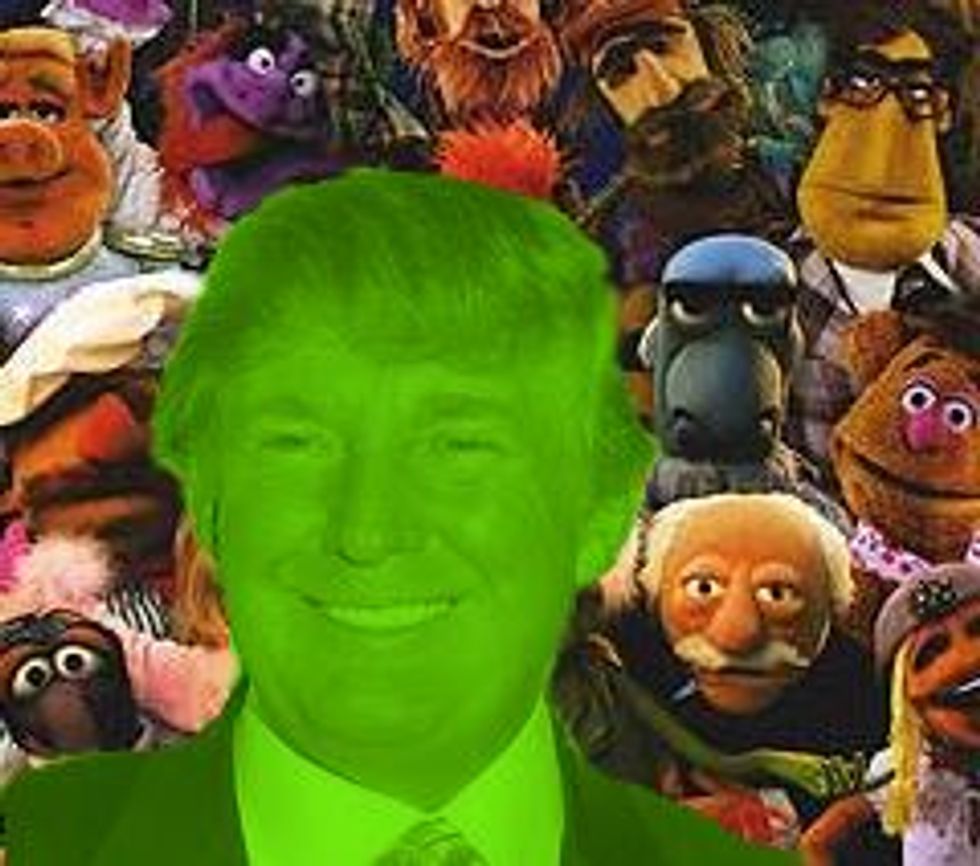 Remember a few months ago when the Republicans were excited about ... right, Donald Trump? And then something happened, we never knew exactly what, and he was "no longer a viable candidate." His multi-million ill-gotten fortune couldn't have been the problem, because Mitt's still in. The serial adultery and divorces and tacky new wives? Nope, Newt's still around. Being mentally ill? Hasn't stopped Bachmann! What about the basic ignorance and stupidity? Rick Perry hasn't quit the race, and it's not what's making Herman Cain quit, either. Maybe it was his national joke of a hairpiece? Whatever the reason, Donald Trump was at least as qualified as all the other GOP candidates combined, so now he gets the consolation prize ofmoderating a Republican debate, presumably because Kermit the Frog had a prior commitment (and some morals).

The NYT reports on this latest slip down the GOP's evolutionary ladder:

Donald Trump is pairing up with Newsmax, the conservative magazine and news Web site, to moderate a presidential debate in Des Moines on Dec. 27.

“Our readers and the grass roots really love Trump,” said Christopher Ruddy, chief executive of Newsmax Media. “They may not agree with him on everything, but they don’t see him as owned by the Washington establishment, the media establishment.”

Mr. Trump’s role in the debate, which will be broadcast on the cable network Ion Television, is sure to be one of the more memorable moments in a primary season that has already delivered its fair share of circus-like spectacle.

Oh come on, liberal New York Times! You are insulting circus-like spectacles and the reputation of professional clowns and freaks.

So, on December 27 when lonely old GOP primary voters are starting to realize their kids really aren't coming for Christmas this year, Donald Trump and the senior-citizen webzine Newsmax will finally provide some top-notch holiday entertainment. We are hoping that whole Internet censorship thing is finished and enacted by then, so we don't have to liveblog this pathetic bullshit. [NYT]