Donald Trump Trying To Build His Own Secret, Privatized CIA. What Could Go Right? 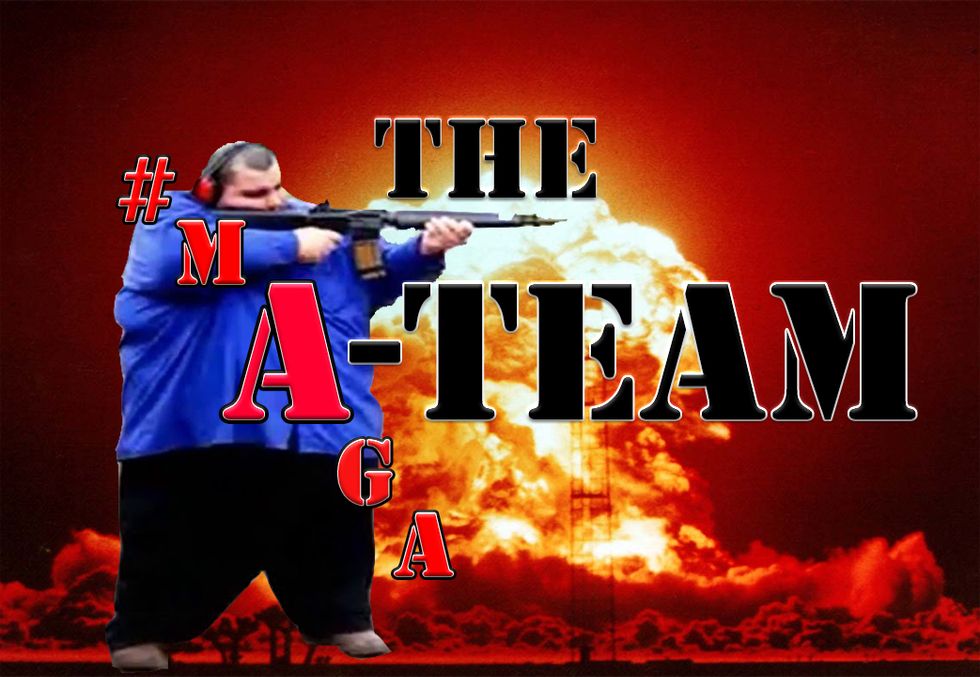 Lost in the fury of last week's tax fuckery and Trump-Russia revelations was a rumor that the White House and CIA have been drafting a scheme to establish a private intelligence service that could run around the world blowing stuff up and "renditioning" people.

You may be wondering why that sounds familiar; it's because it's basically the premise for The A-Team.

Instead of a ragtag group of rascals who ride around America kicking ass in an indestructible cargo van, the proposal's aim is to set up a large intel network with a defense contractor that could do Uncle Sam's dirty work. Instead of being bogged down by red tape and bureaucratic mumbo-jumbo, this crack squad of ex-military commandos could swoop in, grab terrorists on the toilet, and then pass out Pop-Tarts and GI Joe comics to the poor, starving children of Africa-stan. Free from the oppressive shackles imposed on it by liberals, the United Nations, and international treaties, the Trump administration could once again shine America's blood red light from atop Ronald Reagan's hill.

Some officials in the so-called "deep state" are dismissing the notion that Trump is attempting to create his own secret MAGA police, with one government official stating, "the idea they are pitching is absurd on its face...and it's going nowhere."

While it's a premise that is as terrifying as it is farcical, it's not far-fetched. During the halcyon years of the Iraq War 2: Desert Boogalo, the US turned to contractors to take care of all the boring crap. Companies like Blackwater (now Academi) handled "security" while Halliburton took care of logistics operations, like building KFC/Pizza Huts and hiding incidents of gang-rape.

Right now there are more than a dozen different companies that will dig up dirt if the price is right. What's notable here is that the CIA and Trump's White House are attempting to outsource US spying, specifically with Amyntor Group, a small private contractor based out of Whitefish, Montana.

Why Whitefish, Montana, a small Western town full of Ameros, twinkly white Christmas lights, and gorgeous natural beauty has become the center for Making America Great Again via neo-Nazis and neo-Conservative cronyism is a mystery. Perhaps it's because it's the hometown of ex-Navy SEAL/Interior Secretary (and grifty bastard) Ryan Zinke, and perhaps it's just one hell of a coincidence.

In October, CIA Director Mike Pompeo vowed to make the CIA "much more vicious" to US adversaries. That's not too shocking considering that in January Pompeo quietly revised statements he made during his confirmation hearing to suggest that he wants to revisit the idea of torturing detainees at CIA black sites. Unfortunately for Pompeo, the Army Field Manual explicitly bans torture (for now), and transparency laws and "deep state" whistleblowers would inevitably expose any Trump-branded torture palaces, no matter where they try to hide them.

Since Trump came into office deriding the intelligence community, it's hard to imagine why the rank and file would kiss his ass. The day after the inauguration, he gave a rambling speech where he gloated and bemoaned his crowd size in front of the CIA's Memorial Wall of Agency Heroes. Just three weeks earlier, Trump publicly doubted US intelligence reports on election fuckery, going so far as to insult them and openly support support the half-baked narrative by Julian Assange. And just this weekend, Trump was rebuked by the FBI Agents Associations for saying the agency was in "tatters."

What's a political despot-in-training to do when the rank-and-file refuse to be used as pawns? Why, you hire your own private military, of course! And who better to use than the same old shady sons of bitches who have years of experience in rectal feeding, torture, murder and rampant grift?

Back in 2010, the New York Times published a story detailing how some spooks-for-hire were running around Afghanistan and Pakistan killing suspected terrorists and trying to create a pro-American news website written by local Not American journalists. The latter was an idea pushed by then Maj. Gen. Michael Flynn, who was serving as the top intel aid to the head of JSOC and who was later fired by Obama for being a lunatic, and Stan McChrystal (who was also fired by Obama for talking shit).

The project was eventually scrapped by the DOD after it was revealed that one of the heads of the company, Duane Clarridge, a disgraced CIA operative who was indicted and later pardoned for his role in Iran-Contra, had set up shop in Pakistan and Afghanistan to blackmail the brother of Afghan President Hamid Karzai as a heroin addict by stealing his beard trimmings. Clarridge passed away last year while serving as a foreign policy advisor to Ben Carson, but much of his operation in the Middle East remained intact under Amyntor Group as it was primarily funded by private investments.

Let's just hand Afghanistan over to Erik Prince. What could go wrong?

SPOILER, the answer is probably yes.

People who've seen the literal Powerpoint presentation for the plan have likened it to an earlier pitch by Erik Prince to privatize the war in Afghanistan, though that's being denied. However, Prince's former lackey, Michael Barry, was recently given a spot on the NSC to act a liaison for national security policy and the CIA. And things get even more interesting if you remember that the Bush 43 administration used Blackwater to spy/kill/capture top al-Qaeda members. After the program was exposed, Prince -- up to his ass in scandal and lawsuits -- lamented in an interview, "We were building a unilateral, unattributable capability," but the program foundered when a number of people involved felt a secret squad of hitmen-for-hire might be a bad idea.

All of this is compounded by the apparent downfall of an Obama-era program called the High-Value Detainee Interrogation Group (HIG). The intent of the HIG was to make DC's alphabet soup of bureaucracy work together to extract information from specific detainees without forcing an existential crisis in humanity, but nobody wanted to play together, and Congress never really funded the program. The lack of investment has caused the HIG to hemmorhage the very people who were tasked finding alternatives to torture.

As the Trump administration struggles to cut through the red tape and procedural hurdles that make it illegal for the US government to conduct secret wars on foreign soil, they've attempted to use the only loophole left. Contractors aren't beholden to the same types of transparency regulations and rules of engagement as government agents. Where the CIA would be prohibited from using microwaves to spy on people, Trump's soldiers of fortune would be under no obligation...as long as the check clears.

Wonkette is independently owned and operated ... and not by disgraced Iran-Contra spooks! Click here to help us stay that way!