Donald Trump: Why Was Megyn Kelly Moderating A Debate Instead Of In The Blood Hut? 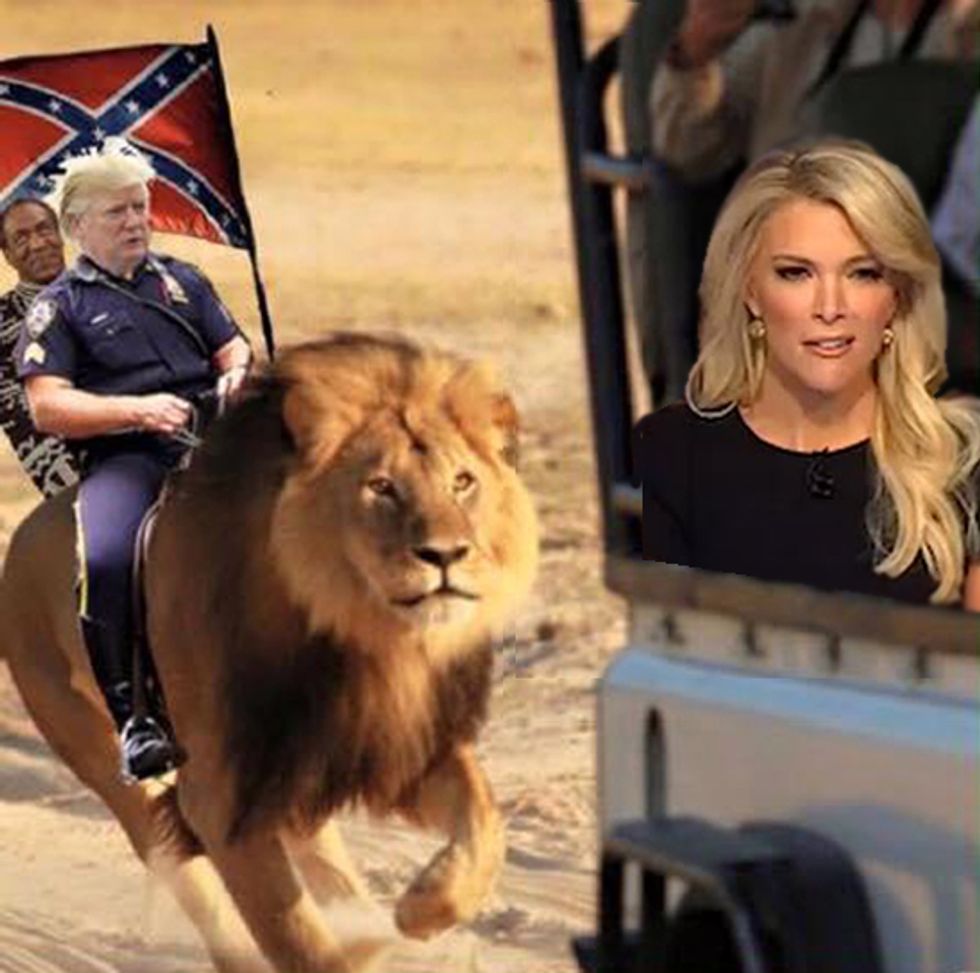 Hey, it makes as much sense as the original

How's this for a surprise? Donald Trump shot his fool mouth off again, and this time managed to say something stupid enough to get himself disinvited from Erick Erickson's Cattle Call For Rightwing Ninnyhammers, as we all know what a stickler for politesse Erick, Son of Erick, is. In an interview with CNN Friday, Trump said that he could tell that Megyn Kelly was simply too flushed with lady hormones to be nice to him at Thursday's Republican primary debate:

This was certainly news to Yr Wonkette. We'd been pretty sure the only person who was on the rag Thursday was Lindsey Graham.

Trump's team initially tried to explain to Erickson that he'd said "blood coming out of her 'whatever,'" not out of her "wherever," which seems maybe a distinction without a difference; they have since "clarified" that the specific location of Kelly's purported bleeding was her nose, and what's more, they added, "only a deviant would think anything else."

You know, it's like that stereotype about women: They get super emotional and irrational when they get their monthly nosebleeds. We suppose it's also possible, given his alleged treatment of his ex-wife Ivana, Donald just assumes that all women get themselves a bloody nose from time to time.

After Erickson told Trump he was no longer welcome in the clown car parking lot, Trump's campaign issued a typically classy statement explaining that the withdrawal of the invitation was

another example of weakness through being politically correct. For all the people who were looking forward to Mr. Trump coming, we will miss you. Blame Erick Erickson, your weak and pathetic leader. We’ll now be doing another campaign stop at another location.

Erickson noted on RedState that while he told the Trump campaign that he "felt bad for Mr. Trump because he has gotten so much sh*t from so many people and the party itself wasn’t treating the guy at the front of the pack as legitimate," this was just one step too far. And that's coming from the guy who called David Souter a “goat-fucking child molester.”  But HE apologized, and Trump never did. And so the question must be asked: Is our Supreme Court Justice insulters learning?

Trump certainly doesn't think he has to apologize for an innocent, incomplete thought about Megyn Kelly's bleeding nose. Saturday morning, the Trump campaign issued a statement from the Bossman himself:

"The guy (Erick Erickson) who made the decision about RedState called Supreme Court Justice David Souter a 'goat [expletive] child molester' and First Lady Michelle Obama a 'Marxist Harpy,'" Trump said. "He was forced to make a humbling apology. Also, not only is Erick a total loser, he has a history of supporting establishment losers in failed campaigns so it is an honor to be uninvited from his event."

Hmm... "supporting establishment losers"? We predict that within a week, Trump will start actively calling Erickson a "cuckservative."

Attendees of the RedState Gathering had mixed reactions; some were happy to see the crude misogynist creep disinvited so that they could better pay attention to the more polite misogynist creeps in attendance, but one Trump fan, Michael Pemberton, 65, made a little paper sign that said "I am Donald Trump" and pinned it to his jacket with his American flag pin. He explained to the Washington Post that Trump hadn't even been talking about ladyparts bleeding, not at all, you commie preverts:

"It's wrong to exclude him and insult him on what people interpret he said as opposed to what he said," said Pemberton. "He was saying that Megyn was seeing blood, in her eyes. As far as 'blood coming out all over,' the first thing I think of is not a woman's menstrual cycle. I think of Jesus Christ, thorns on his head, nail holes in his hands, stigmata."

Why, yes, that makes perfect sense, it really does. Pemberton didn't clarify if he thought this means Donald Trump was being crucified, or that Megyn Kelly should be.

In Trump's stead, Erickson has invited Megyn Kelly to address the Redstate Gathering Of The Chuckleheads; no word on whether she's accepted. We're guessing she might not, given that she's gone all feminist on Erickson in the past.

We'd advise her against attending -- even without Trump in attendance, there's almost certain to be someone in the audience who'd yell "I can smell your cunt!" and throw semen at her. Or maybe ask her to bless their sick child, that her holy stigmata blood might heal the poor dear.

Programming Note: Because of this Breaking Menstrual News, yr Saturday Nerdout will run at a later date, like on a Not Saturday this week.