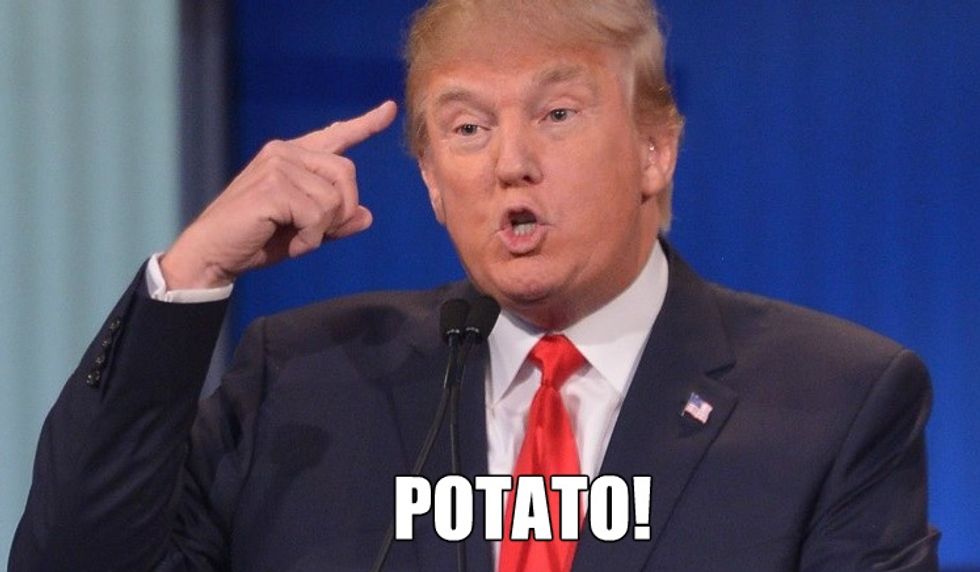 Now that Donald Trump has proven his ability to read a speech from a teleprompter, thus making him the master of all foreign policy, he figures it's time to give his socio-political movement a name. A name that will ring through the media and eventually into the history books, like the Civil Rights Movement, the Youth Movement, the Feminist movement, or the Tea Party Movement. He's come up with the perfect moniker: "The Smart Movement." The sad thing is that you know he thought of it all by himself.

“We have a movement going on. You know, in a way I call it the smart movement," Trump told an audience in Evansville, Indiana.

Telling voters that they will get sick of him from seeing so much in the coming days, Trump said polls are showing him doing well in the state.

Huh! We'd say the middle paragraph is spot on. And your own popularity is certainly evidence for the first line of the third paragraph. You may want to ask someone to explain the math there.

Honestly, when we hear Donald Trump calling his Coalition of the Witless "The Smart Movement," the first thing that comes to mind is that painful scene in Welcome To The Dollhouse where the sweet innocent little girl has absolutely no idea why anyone might laugh at the completely earnest name "The Special People Club." Except with Trump the cringing isn't nearly so sympathetic.

Hell, Donnie, if you want to call it the Smart Movement, you just go right ahead. You may want to consult with professors Dunning and Kruger first, however. On second thought, forget it. They couldn't begin to explain it to you.

In conclusion, we have had movements smarter than Donald Trump, the end.