Donald Trump Wins Trump University Lawsuits, Has To Pay Out $25 Million For Some Reason 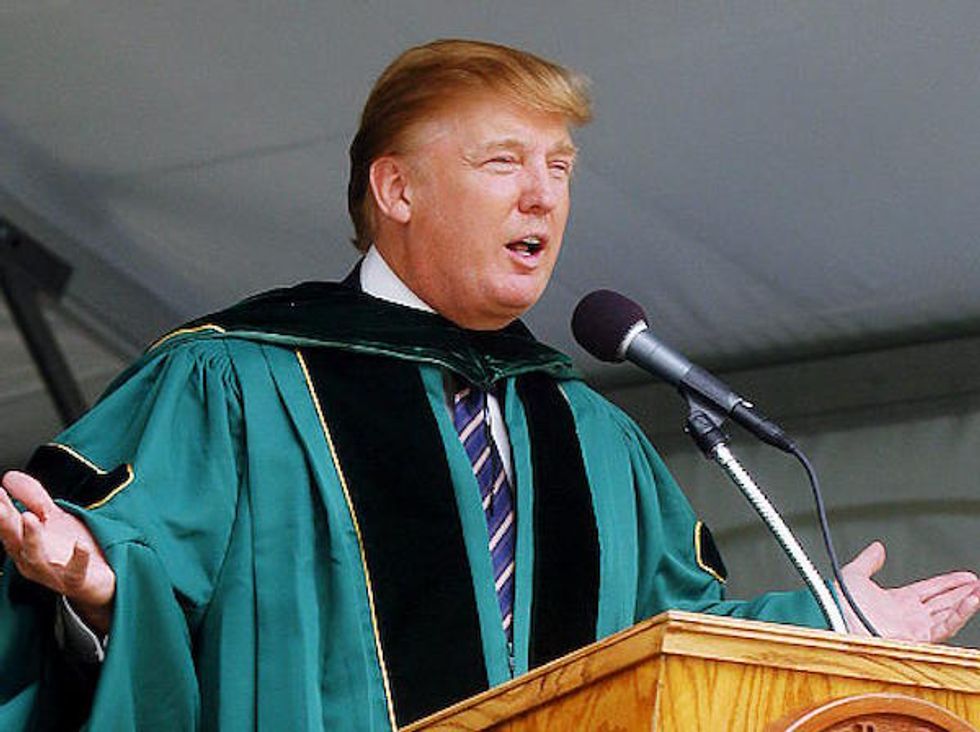 Donald Trump, who never ever settles lawsuits because that sends the message that you're weak, has agreed to a $25 million settlement in the three fraud lawsuits against him over the scammy real estate seminars he sold as "Trump University." New York Attorney General Eric Schneiderman, who had brought one of the suits, announced the settlement late Friday afternoon in a classic Friday News Trump.

Schneiderman said the settlement included a $1 million fine to the State of New York for calling the scheme a "university" in violation of state law, seeing as how it offered no degrees or traditional education. Or for that matter, anything of value at all. The settlement also includes two additional class action lawsuits brought in California by customers who said the real estate seminars were more focused on selling customers the next level of "instruction" than on actually teaching people how to get rich in real estate. The trial in one of the California cases was set to begin in just ten days.

No comment was immediately available from the Trump Organization, although Yr Wonkette expects the stinky old hairbag to take to Twitter sometime soon to explain he had a winning case, and the plaintiffs would surely have been destroyed, except that he decided to be the bigger man and settle for the good of the country, which needs him to focus on making it great again.

appears to fit a pattern in which lawyers for the president-elect are working to reduce the number of his legal entanglements before he takes office.

On Wednesday, Trump’s lawyers dropped an unrelated lawsuit he was pursuing in Florida against Palm Beach County in which he had complained about commercial air traffic over his Mar-a-Lago estate.

Huh. We thought he NEVER settled. And just like that, he has, and there's nothing left for him to do but continue to insist that everyone who took the phony real estate seminars LOVED them, as proven by the glowing course evaluations they were pressured to fill out. It's unclear at press time whether the terms of the settlement require Trump to never bitch about Judge Gonzalo Curiel ever again.

Frankly, political bloggers should launch a class action suit against Trump for depriving us of the entertainment value of watching a president-elect testifying in a fraud trial against him. WE WAS ROBBED!