Donald Trump Would Like Some Money, Please. For Hats. 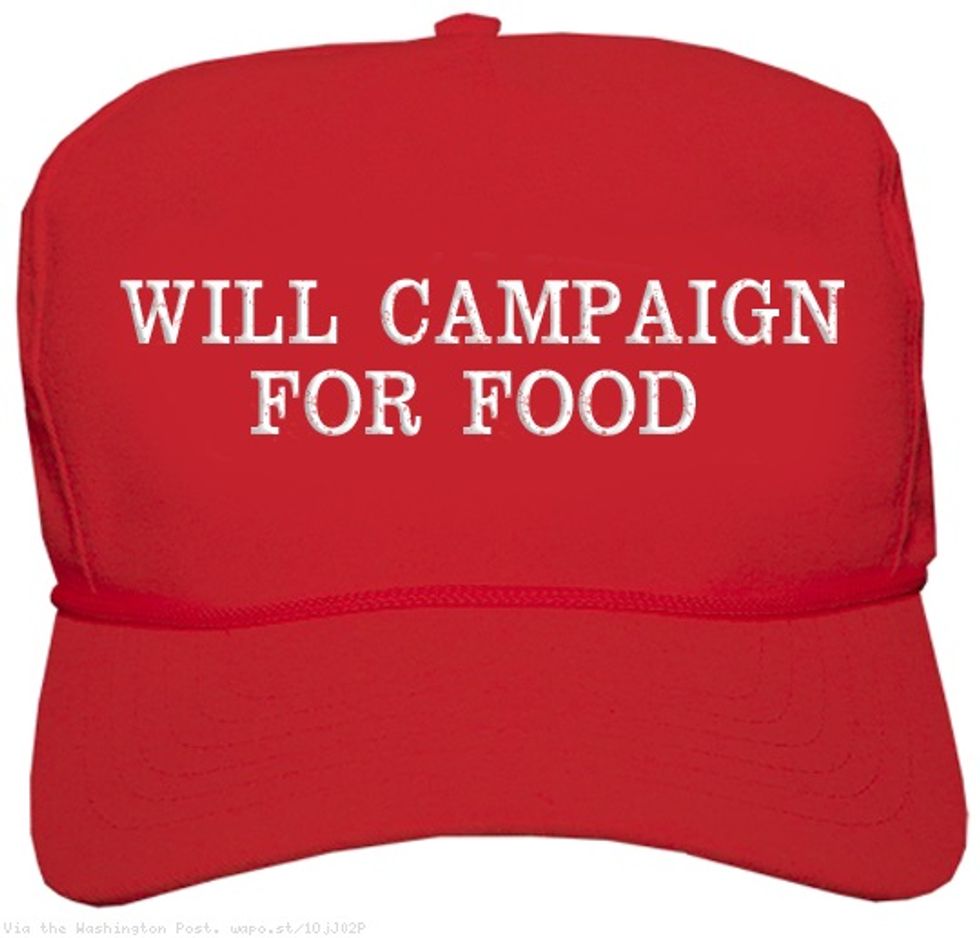 This weekend, Donald Trump made a whole bunch of news with what he said was his very first fundraising ask to supporters, because sometimes, "self funding" requires a little help:

And as usual, he was lying even about it being his very first fundraising letter, as those spoilsports at Time pointed out: That went out on June 2, in a message asking donors to "help us stop Crooked Hillary and the dishonest, liberal media."

So maybe it was no surprise at all that two days after his second "first fundraising email," Trump's FEC filings showed that he's so poor that Fox News might send a camera crew to follow him around and make sure he isn't buying crab legs with food stamps. Not that anyone but his really gullible supporters really believed he was self-funding, but it was a big surprise to find out he had less cash on hand than the long-dormant Ted Cruz and Ben Carson campaigns do, right now.

As Donna Rose's favorite babysitter Charlie Pierce points out, not only is Trump's cash on hand a.) less than Carson's, it's also

b.) less than one would need to run a decent congressional campaign, and c.) less than he would need to buy a decent-sized house in Vancouver, h/t to Bruce Arthur for that last one. (Nicholas Confessore of The New York Times tweeted out the point that the Trump campaign has less COH than does the campaign of Dean Skelos, the former majority leader of the New York state senate, and Skelos is headed for the hoosegow for a spell.)

Yes, Trump has less campaign cash than a convicted state legislator. But maybe that's because he's not crooked and is "self funding"! Yeah, maybe that's it!

Or maybe it's because

The campaign spent $208,000 on its signature Make America Great hats, which may well go down as the Trump campaign's only lasting contribution to the political history of the Republic.

Well, that and their inevitable status as the one item that's more ubiquitous at yard sales than Singin' Billy Bass novelty fish.

Also, we should probably call your attention to this Trumplebrag tweet from just three weeks ago:

Look, he did say "perhaps." So there was some wiggle room there.

Still, it might be premature to think that Trump is never going to get his shit together. Rachel Maddow offered a pretty useful warning Monday night against overconfidence at this moment: Yes, Trump just canned his longtime campaign manager. And his campaign is broke. But what if firing Corey Lewandowski isn't a sign that Trump is collapsing -- what if it's the step that keeps the campaign from collapsing?