Donald Trump Would Rather Fly Around In His Solid Gold Jet Than In Air Force One, Which Has Black All Over It 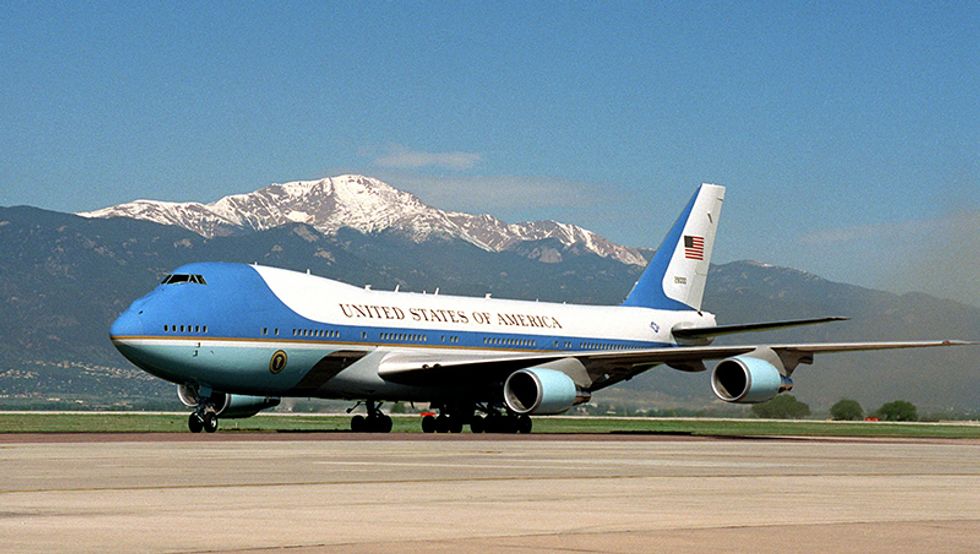 Trump only likes the theme song

During the campaign, Donald Trump really liked to make the occasional big entrance to the theme song from the 1997 Harrison Ford action movie Air Force One, at least until the movie producers asked him to knock it off -- not that a similar request by the Rolling Stones ever did any good when it came to "You Can't Always Get What You Want." And sure enough, on election night, Trump arrived for his acceptance speech with Jerry Goldsmith's overbearing fanfare a-blaring. But Trump has never seemed all that hot on the airplanes themselves (there are two, one of which is always available as a backup), which all you aviation buffs already know are only designated "Air Force One" when the president is aboard -- otherwise they're just the "VC-25A" transport. The two identical 747 planes being used now, ordered during the Reagan administration, are getting old, a point Trump frequently mocked whenever he wanted to complain about Barack Obama and climate change; back in January, Trump complained,

“Watch Obama talking about the carbon footprint, and then he flies over Hawaii in an old 747 with the old engines spewing the hell out of it,” Trump said at a rally in Iowa.

“And then he gives a speech about global warming and the carbon footprint,” he added. “Gets into Air Force One, which is a very old Boeing 747, with the old, really big engines, and if you’re a believer in carbon footprint, you don’t like this, right?

Not that Trump ever thought global warming was real, but yes, the old VC-25As are not as efficient as modern jets, which is why the Air Force contracted last year with Boeing to build two new planes based on the latest 747-8, which looks like the old model but is vastly more efficient, essentially a wholly new model of aircraft. Now Trump wants to kill the new planes off, too, apparently because Trump couldn't think of anything else to grump about on Twitter this morning:

Donald Trump Tweets Something So Awful And Grotesque, You Absolutely MUST CLICK THIS NOW

Did you hear the latest thing Trump wants to do? IT'S OMG WTF BAD!

Why the sudden pique at Boeing? Crom only knows; we'll probably find out he was pissed off at a Fox News story like he was with the supposed epidemic of flag burning. Or maybe it's because Boeing and Lockheed-Martin are both in negotiations to build fighter jets for India in India. Maybe Trump just wants all presidents to own their own jets like he does, though we doubt the Air Force or Secret Service would be at all cool with President Trump continuing to use his private 757, since it lacks the security features and bells and whistles that make the VC25A an airborne command post -- countermeasures against missiles, capacity for inflight refueling, secure worldwide communications, that sort of thing. Add Harrison Ford and the price goes way up, too.

Frank Luntz even decided to go all fact-checky on Trump after the tweet, citing a Politico story on the real cost of the planes: not $4 billion, but less than half that:

Of course, that lower cost is before you add the solid gold lavatory fixtures in the marble double vanities.

Boeing stock dropped about 1 percent after Trump's Tweet, which led one Twitter smartass to ask, "Which one of Trump's kids shorted a bunch of Boeing stock I wonder?"

So there's another sample of the likely M.O. of the Trump presidency: cancel a needed upgrade of Air Force One (really, the old ones are inefficient and using old dirty engines), then brag about saving twice the money that was actually saved. Of course, if you wanted to get really cynical about Trump's possible motivations, you could take the route that Fusion reporter Adam Weinstein did -- after first tweeting the serious reason an upgrade is needed -- "This is a more rigid national security req't than most acquisitions," Weinstein added, "Maybe the real issue here is *he* won't get to play with the new jet." Then he pointed out another itty bitty detail: Alabama Sen. Jeff Sessions, who's been a vital part of Trump's transition team and gets to suppress civil rights if confirmed as Trump's Attorney General, is awfully proud of a new Airbus factory in Mobile, Alabama; further, notes Weinstein following that "Just Sayin'" tweet, "There's a rich recent history of Alabama senators subtweetin' Boeing owing to the state's happy, solicitous relationship with Airbus."

So, (a) Is Richard Shelby An Epic Evil Dick Or (b) Does Obama Hate America?

So there's a thing to make you go "Hmmm" on a Tuesday morning -- is Trump, like a whole bunch of Republican politicians, trying to revive the fight between Boeing and Airbus (which partners with Northrop/Grumman, also based out of Alabama, and tried to get special reconsideration for an Air Force refueling tanker contract awarded to Boeing) over who gets to win another great big government contract? We aren't sure Donald Trump really puts that much strategic thought into his ADHD tweeting, but it's a thing to keep an eye on.

Oh, also, a new poll finds that 56 % of Americans think Donald Trump uses Twitter too much, and 49% think his use of Twitter is "a bad thing." For what that's worth.