Donald Trump Wouldn't Piss On Bobby Jindal If His Pants Were On Fire. Whoever He Is 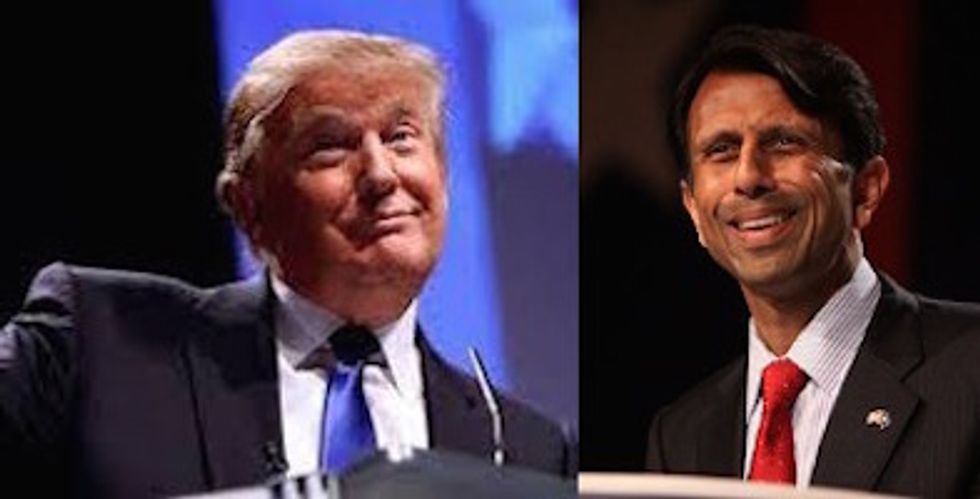 If loving the way Donald Trump so cruelly dismisses his Republican rivals is wrong, we don't wanna be right. After having a little fight with Dr. Ben Carson about who fake-loves Jesus the most -- a fight Trump won, of course, when he forced Carson to apologize to him -- Louisiana Gov. Bobby Jindal, better known as one of those second-tier losers in the race, tried to get in line and wave his hand around frantically, hoping Trump would call on him next, by making this Real. Dumb. Ad.

See, here are clips on Donald Trump saying all the time how he is winning in all the polls, which is true, and here is a clip of Charlie Sheen saying "winning" many times, and so you see how Trump is like Charlie Sheen, which is a mean thing to say, do you get it? DO YOU GET IT? Vote Jindal!

To really drive the point home that he wants Donald Trump to make fun of him next, please pretty please, Jindal said some more mean words about Donald Trump, at the National Press Club:

"It's been a lot of fun, but here's the problem: Donald Trump is not a serious candidate. He's a narcissist. He's an egomaniac. The only thing he believes in is himself. I want to say what everybody is thinking about Donald Trump, but is afraid to say," said Jindal.

"Like all narcissists, Donald Trump is insecure and weak. ... We know that only a very weak and small person needs to constantly tell us how strong and powerful they are."

Jindal also pointed out that Trump is a fake Christian because of how the Donald cannot say any particular thing he learned from the Bible -- terrific book, his favorite! -- and that sure did go well for Dr. Carson, didn't it? So maybe it'll go well for Jindal too? PLEASE, LORD?

Jindal said that recently Trump claimed that his favorite book is the Bible, but yet he could not name a verse or passage that had an impact on him.

"Donald Trump has never read the Bible. The reason we know he has not read the Bible is that he's not in the Bible," said Jindal, likening the Trump campaign to a "carnival act."

So did it work? Will Trump makes YOUR MOM jokes about Jindal now, and say his face sure is way too ugly to be president, and declare that he's already out of the race -- like how Trump has done to all his other rivals who are like, "Come at me, bro"?

In a statement issued through his campaign in response to Jindal’s speech, Trump said: “He did not make the debate stage and therefore I have never met him.”

Trump was referring to the first Republican debate in Cleveland on 6 August, when Jindal did not make the primetime event, which was contested by the top 10 candidates in the polls.

“I only respond to people that register more than 1% in the polls,” he said. “I never thought he had a chance and I’ve been proven right.”

And yeah, Trump has a point. Jindal is an almost-out-of-office governor, and he's doing a real piss poor job of that. And he's certainly not winning any hearts and minds -- OK, well, hearts, anyway -- among Republican primary voters. Here's an average of all the polling since he declared his candidacy. Guess which one's Trump and which one's the other guy, the not Trump, the one whose name isn't even worth mentioning:

There ya go, little Bobby. You got your half a second of a lukewarm shrug in your general direction from the insecure and weak narcissist who's kicking your ass so much it makes our backside sore. Happy now?