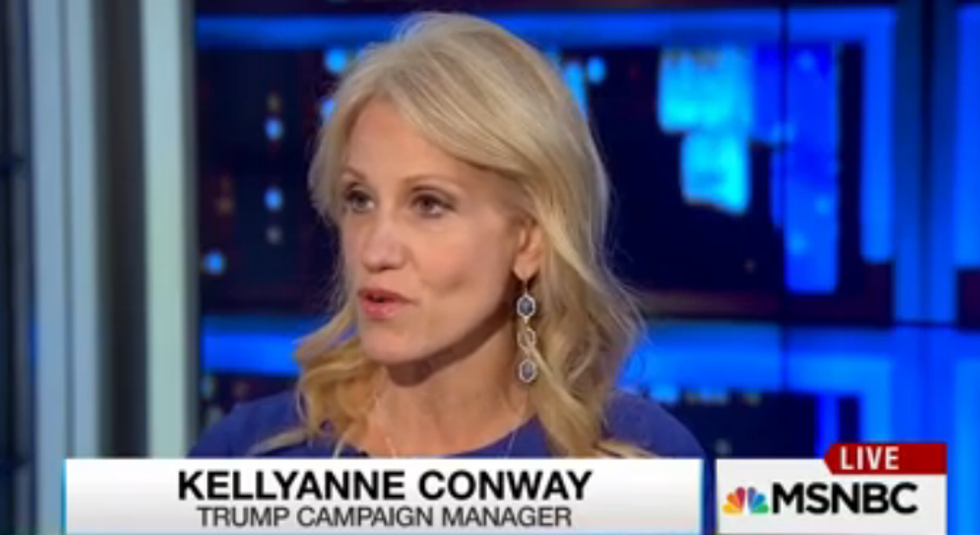 While Donald Trump was down in Mississippi breaking Ann Coulter's heart by saying he might be into some sort of "Not Amnesty" for illegal immigrants, Trump's new campaign manager lady Kellyanne Conway was chatting on the TV with Rachel Maddow, and oh boy, it was bad! Let's have video time and see how bad it sucks to be Kellyanne Conway right now, trying to explain WTF about her boss's plans and policy ideas ON ALL SUBJECTS.

For instance, there was an exchange around Trump's idea of "extreme vetting," where Maddow first tried to accurately assess what in God's name the orange man is talking about, and then had to give Conway a lesson about "Constitution." Follow along:

MADDOW: ... what [Trump] said was, "in the Cold War, we had an ideological screening test. The time is overdue to develop a new screening test for the threats we face today." What is that about? What's the Cold War precedent for this extreme vetting that he's talking about?

CONWAY: He's basically saying, this is not the first time the country has done this, or that it's been done. That we've done this before, but for some reason, we've become lax.

MADDOW: The Cold War precedent for what he's talking about was an ideological vetting. [...] That did exist in the Cold War, in the early '50s. It was called the McCarran Act, which I'm sure you know. And Truman vetoed it and then Congress was able to pass it some other way. But what survived very famously was thrown out by the United States Supreme Court because it was ruled to be unconstitutional. So there is a Cold War precedent for ideological vetting of immigrants. In that case, it was ... to stop communist front groups. But it didn't pass constitutional muster, and we've never had anything like that since that ever has passed constitutional muster. So what he's asking for is a new extreme vetting system, which has previously been tried and ruled unconstitutional and we abandoned it half a century ago. [...]

MADDOW: You can't have a McCarran Act now, it's unconstitutional.

CONWAY: But that's my point too. People can look at it and say, this is ridiculous, that's unconstitutional, you can't have that. Or they can say, that may work, and I'd like to hear more about it.

Oh sweet Jesus. Her "point" is that SOME SAY the McCarran Act was unconstitutional, while OTHERS FEEL Donald Trump should be able to do whatever the fuck he wants, and besides, who or what is this "Constitution" the angry lesbian talk show host keeps talking about? That is what Kellyanne Conway would like to know!

The entire interview was like this, kiddos. Questions from Maddow, and answers from Conway that were often essentially, "No. Yes. YesNo. Also NoYes. How is this not clear?" How does Trump feel about his policy on banning Muslims, which originally involved deporting even American citizen Muslims, and banning all Muslim immigrants, but then "softened" into saying ban people from countries with a "history of exporting terrorism"? Has the policy changed? Say words, Kellyanne Conway!

MADDOW: a total and complete shutdown of Muslims entering the United States. It was very clear. Is that now no longer operable as the statement of the Trump campaign? Should we see this new statement about countries with a history of exporting terrorism, should we see that supplanting that earlier statement?

CONWAY: Well, I don't think it supplants it at all.

MADDOW: So they both exist?

CONWAY: I think that -- well, yes they do, because I think it clarifies it.

Well that just makes all the sense in the world.

Conway says Trump very much wants to "pivot" to focus on substance and policy, but Maddow's point throughout is that until Trump decides what his own damn policies are, then we really can't do that, now can we?

Oh, and by the way, Trump has said, "Regrets? I've had a few," but has been stubbornly vague about what precisely he is sorry for. Maddow wants to know, is he sorry for saying that Mexican judge can't judge good, due to Mexican? Is he sorry he shat all over a Gold Star family, just because they are Muslims? Has he personally apologized to the Khans, Kellyanne?

I don't know, and I certainly hope they heard him last Thursday in Charlotte when he said [that bullshit about regrets] ...

He kinda said sorry on the TV, all the problems are over now! GRRRRRRRRRR.

Here, watch the entire 45-minute interview while you are having your yoga brunch. We can't guarantee it'll make you smarter, but it's Rachel Maddow running circles around somebody who clearly has nothing left to hold on to, so it should suit you just fine.