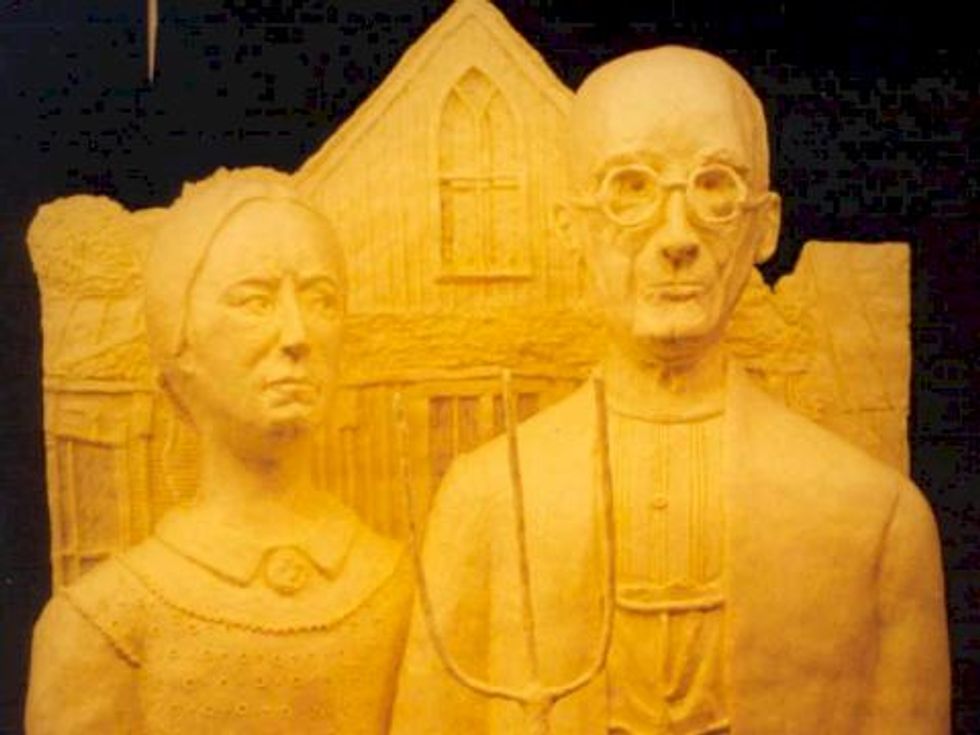 China is hitting back hard in response to Donald Trump's Easy-to-Win Trade War, with tariffs of its own that will play hell with Iowa's economy. Monday, China's Finance Ministry announced tariffs of up to 25 percent on pork and ethanol, which ought to make Donald Trump really popular with corn farmers and swineherds. Hey, is there any reason Trump would want to be popular in Iowa in the next couple years? Darned if he knows. Here's CNN's Erin Burnett with the skinny on how just one hog farmer -- and Trump voter -- expects he'll be affected by Donald Trump's "America First" economics:

In case you skipped the video, here's the skinny: Tim Schmidt said his farm alone stands to lose $35,000 a year thanks to the tariffs. Schmidt added the tariffs could cost up to 3,700 jobs in his county, and said if the trade war is still going on come the next presidential election, Trump may lose his vote -- which wasn't especially enthusiastic to start with.

And that's just China's first round of reaction, to Trump's steel and aluminum tariffs. Yesterday, Trump announced higher tariffs on Chinese-built electronics and telecom products, so today, China hit back with a plan to impose higher tariffs on soybeans, corn, and beef (among 106 items in all). Since Iowa is a leading producer of soybeans, these new tariffs will be even worse news for Iowa, a state whose name just makes us think Trump may be overlooking something important.

The Des Moines Register says the new tariffs come at a particularly lousy time for Iowa agriculture, which is only now recovering from a downturn.

Oh, but wait! There's more! Trump's steel and aluminum tariffs will hurt Iowa manufacturing, too, which is also still recovering from the Great Recession -- and since most of the manufacturing is farm equipment, the hit to agriculture will also hurt those manufacturers. Huh!

Thank goodness Iowa is also home to "seed giant Pioneer, the Johnston-based company owned by DowDuPont's Corteva Agriscience," because seed sales should make up... oh, wait, that'll hurt, too, huh? At the very least, Scott Pruitt's tenure at the EPA should be good for makers of fertilizers, who'll be freed from burdensome environmental regulations and able to sell TONS of... oh, yes, that could be a problem if nobody's planting as much. We see. And both Big Ag and Big Chem have already seen job losses from the last round of mergers and takeovers.

Chad Hart, an agricultural economist at Iowa State University, said Iowa's economy will face "hits across the board":

Agriculture "has been buffeted with low prices and low income for four or five years," Hart said. "A tariff hit now exacerbates a problem that the industry has already been wrestling with."

"We are the world's grocery store," Hart said. "We produce more corn, more soybeans, more pork, more beef than we can consume. We rely on selling it to the rest of the world."

Gosh, that sounds fairly serious. But we bet if Donald Trump just tweets at Americans -- loyal, America-loving Americans at least -- then we'll all start eating more beef and pork and soybeans right here at home. It would be our patriotic duty, after all. Or maybe Iowans will remember that one time he called them dumb stupids for voting for some other fellow.

You know, it seems to us that maybe Donald Trump might want to give some thought to all this tariff stuff, because -- bear with us here -- it sometime looks like all sorts of economic sectors are actually surprisingly connected to each other, so that raising tariffs on steel and aluminum could very well end up hurting hog farmers and soybean growers and the companies that sell stuff to them. We know, it's a crazy thought. But you don't have to be a Dirk Gently to see everything is connected.

One might even suspect maybe none of this actually occurred to Donald Trump, who may have a reason in the next year or two to want Iowans to like him. Again, we can't quite put our finger on it, but we're sure Trump will start eventually regret these Iowa cock-ups.

Also too, since we're on the topic of China and swine, we are reminded of this important Tweet on international trade law by "HATE" comix arteest Peter Bagge, who is actually not hateful at all:

It's that final clause what proves Donald Trump was not involved in the negotiations.