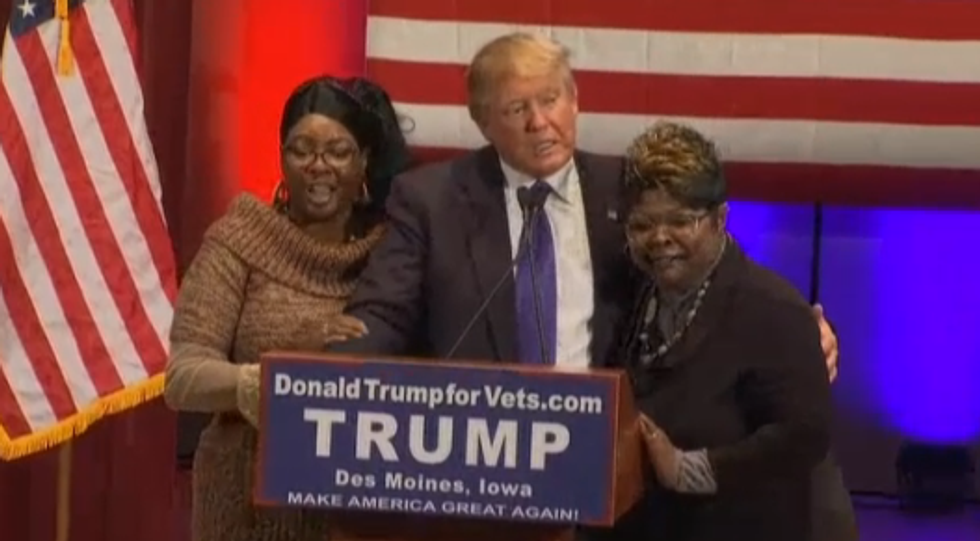 He cares about the racial tensions so much, ayup.

Oh good, presumptive Republican nominee Donald Trump has issued a statement on the devastating Dallas shooting attack that claimed the lives of five police officers and injured seven more. Is he doing "thoughts and prayers"? YES! And he is just heartbroken by how US Americans don't love each other good anymore, and is pained, all the way to the core of his barely existent heart, by the racial tensions in America. Can't we all just get along?

In case you cannot embiggen that on your mom's flip phone, Trump starts by saying a fairly sane thing about what happened in Dallas, and that "We must restore law and order. We must restore the confidence of our people to be safe and secure in their homes and on the street." So far, so good.

Then it gets a little weird:

The senseless, tragic deaths of two motorists in Louisiana and Minnesota reminds us how much more needs to be done.

OK, at least he mentioned Alton Sterling and Philando Castile, even if he called them "motorists" and failed to say their names. Yep, that's the big takeaway from those horrific executions, that they were "motorists." You bet. Motorist lives matter, y'all.

But it's the end of Trump's statement that pisses us off:

Our nation has become too divided. Too many Americans feel like they've lost hope. Crime is harming too many citizens. Racial tensions have gotten worse, not better. This isn't the American Dream we all want for our children.

Donald J. Trump needs to sit the fuck down, stop talking, stop running for president, and go back to Trump Tower, where he can bathe in his luxurious orange bath salts for the rest of his natural life, never to be heard from again.

[wonkbar]<a href="http://wonkette.com/557447/donald-trump-has-more-thoughts-about-the-blacks"></a>[/wonkbar]The "racial tensions" he cites are the same "racial tensions" he's actively encouraged throughout his presidential run. This is the same Trump who insinuated that the problems in Ferguson and Chicago, such as they are, are the result of (psssssst!) black people. This is the guy who pals around with white supremacists (and can't stop retweeting their shit on the internet) and wasn't quite sure whether the KKK was bad or not?

[wonkbar]<a href="http://wonkette.com/596314/trump-supporters-welcome-black-guy-to-rally-with-their-fists"></a>[/wonkbar]Oh, and lest we forget, this is also the same guy who says Mexicans are rapists and all brown foreign-type people (even the American ones!) should be deported. We could spend all day listing Trump's various racisms and incitements to violence, but you already know.

[wonkbar]<a href="http://wonkette.com/603840/five-dallas-cops-killed-by-sniper-who-wanted-race-war-joe-walsh-says-hes-in"></a><a href="http://wonkette.com/603862/daily-caller-and-redstate-post-thoughtful-reactions-to-dallas-police-shootings-wait-what"></a><a href="http://wonkette.com/603854/deadbeat-racist-former-congressman-joe-walsh-has-always-been-at-war-with-human-decency"></a><a href="http://wonkette.com/603853/a-childrens-treasury-of-terrible-reactions-to-the-dallas-police-shooting-even-though-some-people-were-nice"></a>[/wonkbar]Look, Donald Trump did not create racism, but he sure does help keep it alive. And what happened in Dallas was fucking awful, just like it's awful when police murder black men in broad daylight. You can hold both of those thoughts in your head at the same time! You can acknowledge that there is a problem with institutional racism and police bruality in some departments (though Dallas PD has been making great strides in the right direction the last few years!), and also understand that most cops, in general, are basically good people who want to do their jobs well and keep people safe, folks who put their lives on the line every day, who should not be gunned down by snipers while they're protecting people who are peacefully protesting police brutality.

You can support Black Lives Matter (which, to be clear, has fucking nothing to do with what the Dallas sniper did), and also want all cops to go home safely to their families at night.

A black pastor we know tweeted this, and we think it serves as a much better response than anything Donald Trump (or any of the other right-wing assholes out there who are already celebrating the oncoming race war) has to say on the subject:

That. That right there.