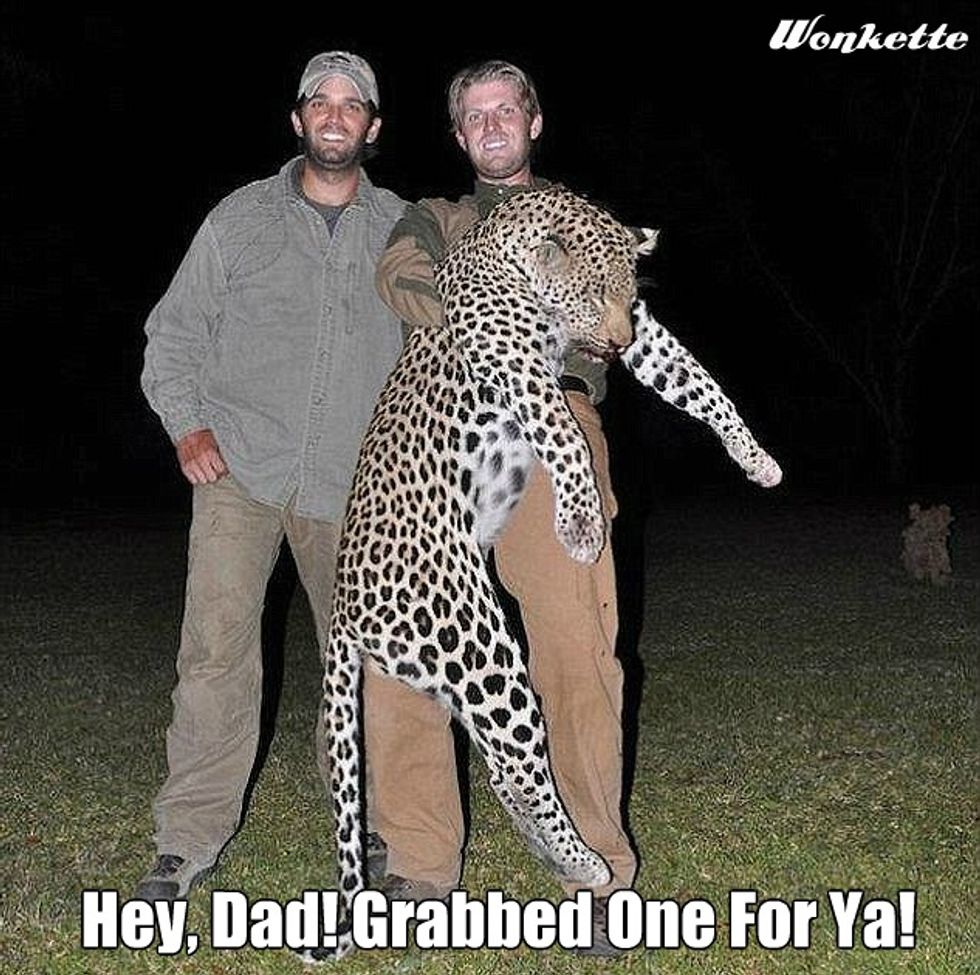 Dad, we've never shot a elephant! Can we? Can we, huh? PLEASE?

As part of Donald Trump's neverending crusade to reverse every single administrative rule enacted under the Obama administration, the US Fish and Wildlife Service (FWS) acknowledged Wednesday that it would now allow big-game "hunters" to import trophies of elephants they've killed in canned hunts in Zambia and Zimbabwe. The Endangered Species Act prohibits bringing trophies from endangered animals into the USA, but there's a loophole allowing such imports when there's evidence that hunting somehow benefits the species.

An unidentified Fish and Wildlife official explained to ABC News that the two nations now had proof their hunting programs are killing off some elephants for the good of all. And it just so happens that those improvements happened after the Obama administration banned the importation of elephant trophies in 2014:

Legal, well-regulated sport hunting as part of a sound management program can benefit the conservation of certain species by providing incentives to local communities to conserve the species and by putting much-needed revenue back into conservation[.]

Like so many policy reversals in this administration, there wasn't exactly an official announcement; instead, as Wayne Pacelle, president of the Humane Society of the US, explained in a blog post, the change was actually trumpeted by Safari Club International (SCI), a bunch of big-game-hunting enthusiasts. The practice of allowing limited numbers of hunts of endangered animals is advanced by hunters and several African nations, who argue that since the revenue from high-priced hunting permits is used to fund conservation efforts, game wardens who crack down on poaching, and habitat preservation, it's a good deal to help the endangered species as a whole. Pacell isn't especially impressed with the terrific steps Zimbabwe says it has taken to protect its endangered animals, noting that Zimbabwe is also where Cecil the lion was lured out of a Zimbabwean national park so he could be shot fair and square by a big-game "hunter" who had paid big bucks for a permit. Pacelle adds:

Under the prior administration, FWS made the eminently reasonable decision that Zimbabwe – one of the most corrupt countries on earth – was not managing its elephant population in a sustainable manner. Government officials allegedly have been involved in both poaching of elephants and illegal export of ivory tusks. Zimbabwean President Robert Mugabe even celebrated his birthday last year by feasting on an elephant.

Zimbabwe’s elephant population has declined six percent since 2001 and evidence shows that poaching has increased in areas where trophy hunting is permitted[.]

He also states that several aspects of Zimbabwe's management of its hunting program are dubious at best, noting there's no formal elephant management plan, sketchy data on populations, and loose enforcement of poaching laws. The country doesn't even disclose where the fees from elephants hunting permits actually end up, or document that those funds actually go to conservation efforts.

In other words, close enough for Trump government work.

The announcement isn't even a formal rule yet, but is scheduled to be posted in the Federal Register Friday, when FWS will supposedly document the improvements in hunting management that justify the change -- an advance draft seen by ABC News says Zimbabwe has improved enforcement against poachers and now has a system in place to report how funds from American hunters are used. Zimbabwe will allow up to 500 elephants a year to be hunted, out of an overall population of 82,000. We're uncertain whether Donald Trump will tweet a demand for the elephants who don't get shot to send him a thank-you note.

As for Zambia, that nation had previously banned elephant hunting when populations were declining, but reinstated it when populations began increasing in 2015. Zambia has about 22,000 elephants, and allowed permits for 30 to be shot for trophies in 2016; the government reported that only 12 male elephants had actually been killed.

Donald Trump Penetrates Deeper And Deeper, Into The Heart ... Of Dickness

Luckily, his sons didn't show up to add 'We love shooting you guys's animals!'

The new rule change applies only to those two countries, but we're certain that the next time Trump goes to the UN, he'll call for the resumption of elephant carcass imports from Nambia as well. He hears there are many, many elephants there who are very bad hombres, and don't the Trump boys deserve the chance to get an elephant head to mount on the wall of the Oval Office?

Yr Wonkette is supported by reader donations. Please click here to support us, and you won't even have to hunt any of the bloggers. No, really, please don't. Also, please note that our Commenting Rules remain very much in effect for this post.