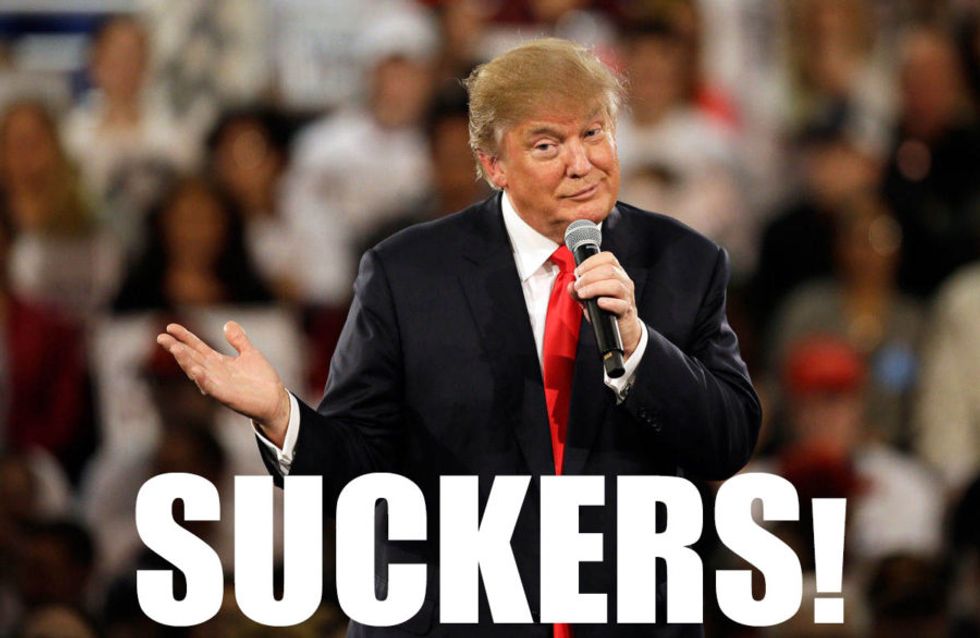 Good thing he's trustworthy, or we might suspect he's not always truthful.

Have your fainting couch ready, Wonkers, for we bring you even more shocking news of Donald Trump's rampant financial dickery, in which he makes promises he doesn't fulfill. Only this time, instead of screwing small businesses, he's screwing over a few charities, partly because he runs his own foundation really differently from most rich people's charitable foundations. As a contrasting f'rinstance, when the Bill and Melinda Gates Foundation gets its name on some PBS show you like, that money came from the two rich persons, Bill and Melinda Gates, and was paid out by the foundation. But as we learn in the latest piece by David Fahrenthold, the Washington Post's Magician King of Trump financial investigative reporting, the Donald J. Trump Foundation may have Donald J. Trump's name on it, but it mostly has other people's money in it, with which Trump then makes charitable donations out of the goodness of his heart and the generosity of others.

One advantage Fahrenthold has in looking at the finances of the Trump Foundation is that, unlike its namesake, the foundation is required to release its tax filings, which show where its money came from and where it went. Now, the really amusing thing about the Trump Foundation is that the last time Donald Trump donated anything to his own damn foundation was 2008 -- since then, it's been funded by other donors, "an arrangement that experts say is almost unheard of for a family foundation." What does Donald Trump do with that donated money? He gives it away, like a charitable foundation should. More or less:

In many cases, he passes it on to other charities, which often are under the impression that it is Trump’s own money.

In two cases, he has used money from his charity to buy himself a gift. In one of those cases -- not previously reported -- Trump spent $20,000 of money earmarked for charitable purposes to buy a six-foot-tall painting of himself.

Yep, at a 2007 benefit for a children's charity, Melania Trump bid $20,000 for a painting of Donald Trump (NO NOT THAT ONE). The money went to the charity, and was paid out by the foundation. The painting apparently ended up at one of Trump's golf courses. In another charity auction, the Trump Foundation paid $12,000 for an autographed Tim Tebow helmet and jersey, which, unlike many Tebow passes, actually made it to its intended recipient, Donald Trump. Just one small problem there, as Fahrenthold explained in an interview with Pro Publica: the IRS doesn't allow heads of foundations to use foundation money to buy stuff they keep for themselves or their businesses. You can get fined for it and everything:

If Trump has kept it and put it on display in his office or somewhere else that's self-dealing. The IRS says you're not allowed to do that. If he had an office for the Trump Foundation, he could put it there, but there is no Trump Foundation office. It doesn't have any staff or any buildings or anything. In order to comply with the law, he has to use the helmet for charitable purposes. He has to give it to a charity. The question is what became of it. We've got no answers from Trump about it. Eric Trump said he thought his father had just given it to a random child which is also not allowed by the IRS.

Picky, picky. Next the IRS will be coming after Mean Joe Green for throwing that little kid his sweaty jersey in the Coke ad. Yes we are old.

[wonkbar]<a href="http://wonkette.com/606196/trump-foundations-gift-to-florida-a-g-pam-bondi-was-a-little-illegal-is-that-a-crime"></a>[/wonkbar]Then of course there was that little 2013 oopsie where the Trump Foundation made an illegal $25,000 political donation to Florida Attorney General Pam Bondi, after which her office just happened to drop an investigation of Trump University. Like the life of Malachi Constant, this was naught but a series of accidents, nothing untoward at all.

Funny thing about that donation, too: Bondi's political group was called “And Justice for All.” That year, the foundation's tax papers listed a donation for $25,000 to a group called “Justice for All,” but it wasn't Bondi's group in Florida -- instead, it was a Kansas charity that didn't actually receive a cent from the Trump Foundation in 2013. Turns out that such ghost donations occurred more than once:

Trump’s foundation appears to have repeatedly broken IRS rules, which require nonprofit groups to file accurate paperwork. In five cases, the Trump Foundation told the IRS that it had given a gift to a charity whose leaders told The Post that they had never received it. In two other cases, companies listed as donors to the Trump Foundation told The Post that those listings were incorrect.

Fahrenthold adds the Trump campaign has so far declined to comment on detailed questions he's submitted about the foundation, if you can believe that.

In a new piece published Monday, Fahrenthold details those five mystery donations. One was the the Kansas-based group whose name was listed instead of Bondi's, which the campaign insists was a simple clerical error because of the similar names. There are four others:

You are looking at that list now and saying to yourself, Hey, Dok, that list has but three bullet points, not four! That's because we're bringing you the saddest of the bunch in especially sad blockquote detail, as Fahrenthold covered it in Sunday's story about the bait-and-switch job the Trump Foundation pulled on a small veterans charity:

This January, the phone rang at a tiny charity in White River Junction, Vt., called Friends of Veterans. This was just after Trump had held a televised fundraiser for veterans in Iowa, raising more than $5 million.

The man on the phone was a Trump staffer who was selecting charities that would receive the newly raised money. He said the Vermont group was already on Trump’s list, because the Trump Foundation had given it $1,000 in 2013.

“I don’t remember a donation from the Trump Foundation,” said Larry Daigle, the group’s president, who was a helicopter gunner with the Army during the Vietnam War. “The guy seemed pretty surprised about this.”

The man went away from the phone. He came back.

Was Daigle sure? He was.

The man thanked him. He hung up. Daigle waited — hopes raised — for the Trump people to call back.

“Oh, my God, do you know how many homeless veterans I could help?” Daigle told The Post this spring, while he was waiting.

Trump gave away the rest of the veterans money in late May.

Daigle’s group received none of it.

[wonkbar]<a href="http://wonkette.com/602443/donald-trump-media-veterans-donations"></a>[/wonkbar]As we all remember, what actually happened to the all the money Trump raised for The Vets was that he personally donated One Million Dollars to one group, the Marine Corps-Law Enforcement Foundation, and then Trump got very pissy indeed when asked where the rest of the money raised in his call-in show went, and he cried that instead of praising him for raising money for vets, the mean old media asked where the money went instead, and that's so unfair, because he gave out about $5 million all in the week after reporters dogged him on what happened to the money. Not a penny of which actually made it to Friends of Veterans, which agai had no record of the lousy $1,000 supposedly given in 2013.

Now, if only we can find out whether the Trump Foundation really gave anything to The Human Fund, whose chair, Art Vandelay, hasn't returned our calls.