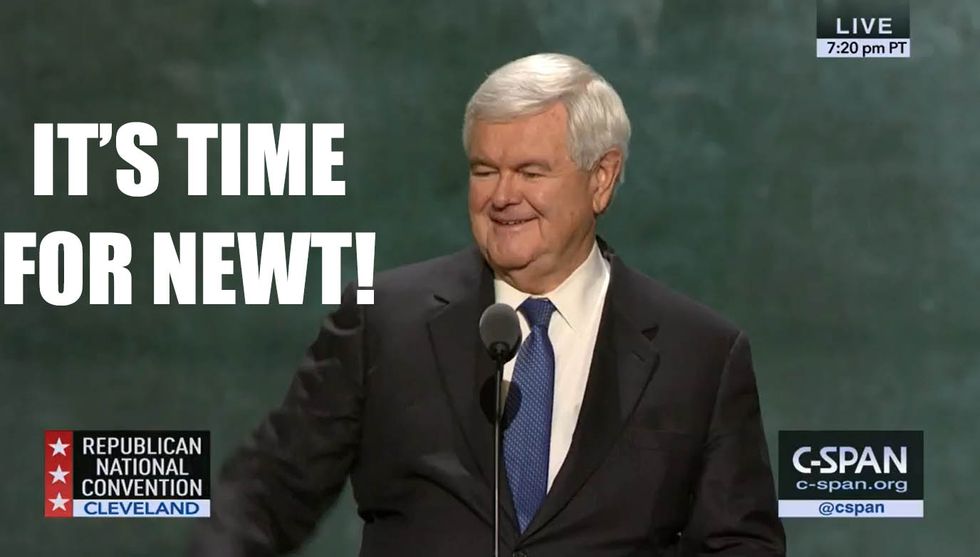 Somebody has been yammering his man-boobs off the past few days, and it is Donald Trump butt-boy Newt Gingrich! Now that Trump has barely squeaked out an election win, Gingrich has all sorts of ideas for how the rules don't apply to the incoming president, and if they do, they should just be changed to allow Trump to do whatever the hell he wants.

But first, Gingrich issued a very clear explanation for why it's OK for Trump-As-President to go back on everything he said as Trump-As-Candidate, because it's all fine and cute to lie to morons, convince them to vote for you, and then proceed to govern as if those voters can fuck right off. Let's start with Trump mantra "Drain The Swamp," which Gingrich said in an NPR interview was just a slogan to swindle those morons, and now Trump doesn't like it no more:

I'm told he now just disclaims that. He now says it was cute, but he doesn't want to use it anymore. [...]

I've noticed on a couple of fronts, like people chanting "lock her up," that he's in a different role now and maybe he feels that as president, as the next president of the United States, that he should be marginally more dignified than talking about alligators in swamps.

MARGINALLY. That is the best we can hope for from somebody who thinks "unpresidented" is a word and can't be trusted with a Twitter account. Newt seems to be parsing language, though, and not addressing the fact that, as Sen. Elizabeth Warren has explained, Trump's appointments so far are some of the worst swamp monsters to ever muck up a swamp. Newt concludes by pledging his allegiance to his Dear Leader, saying "if [Trump] decides to drop the swamp and the alligator, I will drop the swamp and the alligator." Awwww, but Newt thinks it's funny!

In the same interview, Newtie talked about Trump's massive conflicts of interest, and what should be done about them. Should the Trump team put his assets in a "discretionary" trust, where he doesn't own them but can still make money off them and hear about how they are doing, as Politico reported the Trump team is now considering? (George W. Bush's ethics lawyer Richard Painter, by the way, calls this arrangement "highly inappropriate," and Politico reports that the Obama appointee who runs the Office of Government Ethics [OGE], Walter Shaub, will be there until 2018, and probably won't be much into the idea of doing any special favors for Trump. Hooray for there being a few grown-ups remaining in government, even after Obama leaves!)

What about a blind trust? Would Newton The Gingrich be cool with that? WELLLLLLLL, he says the American people are not the kind to go around "trusting people with power," and that they "want accountability," but ...

I totally defend him against those who, for example, want him to put his holdings in a blind trust, which is an absurdity. ...

ABSURD! To think Trump would do it the way literally everyone else does it would be UNFAIR TO TRUMP, who is a very special boy who gets to do what he wants!

Gingrich ... says Trump should push Congress for legislation that accounts for a billionaire businessman in the White House.

“We’ve never seen this kind of wealth in the White House, and so traditional rules don’t work,” Gingrich said Monday during an appearance on NPR’s "The Diane Rehm Show" about the president-elect’s business interests. “We’re going to have to think up a whole new approach.”

We guess that'd probably be a good approach regarding all the foreign governments lining up to buy access to the president (like Kuwait! and Bahrain!), by booking their events in his tacky-ass hotel that's not fit for actual, discerning luxury customers, yeah? Just change the goddang rules to say "You can buy and sell Donald Trump real easy, he is the cheapest date EVER."

And what about all those dumb rules about how quote-unquote "nepotism" laws say Trump shouldn't hire Ivanka to be on his White House staff or in a newly created cabinet position called "Hottest Presidential Daughter," or his sons Uday and Qusay can't be the joint secretaries of incorrect haircuts? How should Trump flout those, Newt Gingrich? From the Diane Rehm interview:

I think in the case of the president, he has a broad ability to organize the White House the way he wants to. He also has, frankly, the power of the pardon. I mean, it is a totally open power, and he could simply say look, I want them to be my advisors, I pardon them if anybody finds them to have behaved against the rules, period. And technically under the Constitution he has that level of authority.

See? No big. Just let them break the law, pardon them, and then everything will be fine. (This also applies, apparently, to any illegal orders Trump might want to give to the military and intelligence services! Hooray, lawless president!)

And Trump should get away with all this shit, again, because he is allegedly a "billionaire," which means normal rules don't apply. Diane Rehm's other guests that day kind of lost their shit at that, with Richard Painter noting that "there is no billionaire exception in the Constitution of the United States." American University professor James Thurber summed it up nicely, so we will give him the last word:

Speaker Gingrich's statement that wealth trumps the rule of law -- basically, that's what he was saying -- is jaw-dropping. I can't believe it. He's a historian. He should also know that we did not want to have a king. And a king, in this case, is somebody with a lot of money that cannot abide by the rule of law.