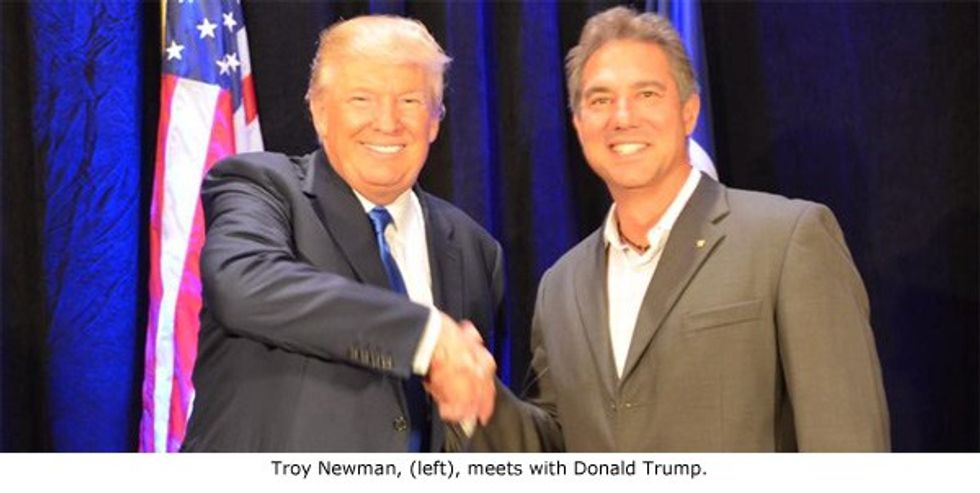 We think you have that backwards.

We've been hearing many wonderful, wacky things about the big heart-to-heart confab Donald Trump held Tuesday with the shining stars of the religious right, in order to convince them that yes, those little Jesus crackers are indeed his favorite; yes, he really does like the Bible more than his book The Art Of The Deal; and yes, he's read all of Two Corinthians, and it's terrific, just tremendous.

Jerry Falwell Jr. was there, taking pictures with Trump, and also Trump's framed copy of Playboy magazine. Mike Huckabee, Ben Carson, Billy Graham's wayward son Franklin, and many others were there, having #fellowship with the thrice-married adulterer Trump.

[wonkbar]<a href="http://wonkette.com/563854/pro-life-murderer-demands-his-first-amendment-right-to-kill-again"></a>[/wonkbar]But guess who else was there, whose name doesn't show up in the transcript of the event, and who wasn't listed on the official event announcement? Troy Newman, president of the extremist anti-abortion group Operation Rescue! A man who has expressed support for killing abortion providers in the name of the Lord. A man whose sidekick at Operation Rescue, Cheryl Sullenger, went to federal prison for plotting to bomb an abortion clinic. Oh, and she gave "pro-life" extremist Scott Roeder information on Dr. George Tiller, who provided late-term abortions to women in the direst of situations. Of course, Roeder went on to assassinate Tiller at his church.

Look at Operation Rescue's exciting announcement, about how they are BFFs with Donald Trump now. Sullenger, the woman who went to prison, typed it up:

“I’m very impressed that Mr. Trump would sit with conservative leaders for multiple questions, and then give direct answers,” said Newman. “I don’t believe anything like this has ever happened.”

Newman served as former co-chair of the Pro-Lifers for Cruz coalition, and endorsed Sen. Ted Cruz early on. But with Cruz out of the race, Newman attended the meeting to ensure that Trump would indeed act on his newly-embraced pro-life position, if elected.

How wonderful for all of them to come together in this way! Operation Rescue gleefully shares that Trump promised only to appoint "pro-life" judges, to repeal all the abortion-tastic parts of Obamacare, and even to defund the demon organization Planned Parenthood. Hallelujah and Praise God From Whom All Blessings Flow!

Here are a few of the most horrific things Troy Newman has ever said. Conveniently, they are all in his 2000 book Their Blood Cries Out:

In addition, Newman issued a press release in 2003, defending Paul Jennings Hill, who murdered an abortion doctor, saying that "There are many examples where taking the life in defense of innocent human beings is legally justified and permissible under the law. Paul Hill should have been given the opportunity to defend himself with the defense of his choosing in a court of law."

Oh, and he really likes to stalk abortion clinic workers:

A 2004 Los Angeles Times story described Newman shadowing clinic workers and seeking “not just to make their lives uncomfortable” but also to “disgust their friends and associates.”

We can all agree that Trump's new BFF seems really nice, can't we?

[wonkbar]<a href="http://wonkette.com/596828/planned-parenthood-shooter-did-it-for-the-babies-lets-ban-pro-lifers-from-america"></a>[/wonkbar]We understand that Trump is putting forth his best effort to make nice-nice with the Christian right, but considering how a crazed gunman carried out a mass shooting at a Planned Parenthood in Colorado Springs last year (which he did "for the babies!"), it's a bit astonishing that Trump is getting all lovey-dovey with a character like Newman.

[wonkbar]<a href="http://wonkette.com/600212/donald-trump-will-bomb-sht-out-of-ladies-who-have-abortions-murder-their-families"></a>[/wonkbar]Or is it? Remember when Trump said there "has to be some form of punishment" for women who have abortions? Of course, he tried to backtrack and say he did not say that thing he said with his mouth, even though he said it. And he also noted that what he meant to say was that it was abortion doctors who need to be punished. Boy howdy, both of those things are Troy Newman's favorites!

Maybe Trump is just pandering. (Probably.) Maybe he actually believes these things, and also hates women. (Likely!) Regardless, with pals like Troy Newman, it's more obvious than ever that the short-fingered vulgarian has no business anywhere near the Oval Office.