Donald Trump's 'Shoot Somebody' Plan Gets Big Thumbs Up From Supporters 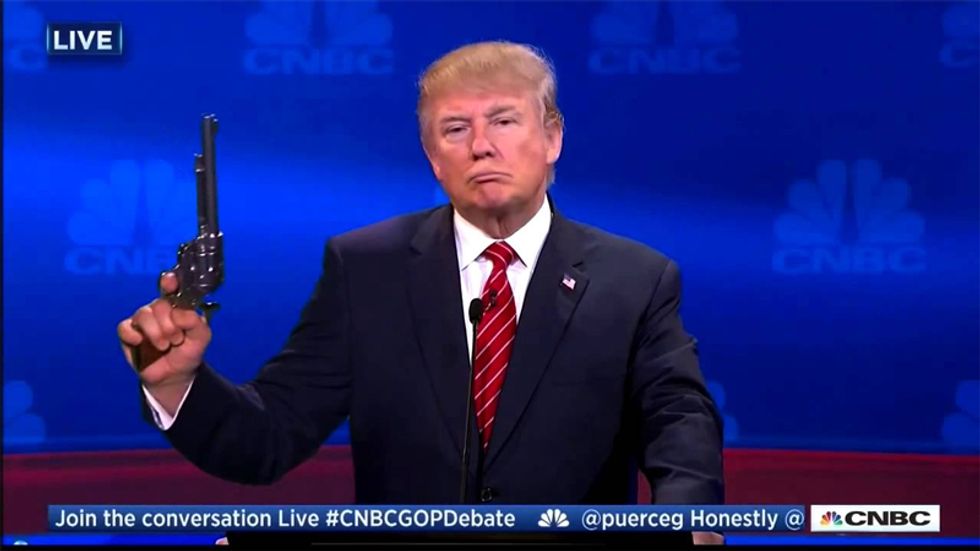 I know what you're thinking. Did he fire six shots, or only five?

Donald Trump is pretty darned happy about his polling, and his incredibly yooge support from everyone. He is easily the most-beloved figure in American politics since Ronald Delano Lincoln, and he knows for a fact that his supporters would walk through hell for him, as long as they were sure it would piss off some ay-rabs. How confident of his supporters' loyalty is he? Pretty darn confident, as he made clear in a rally in Sioux Center, Iowa, on Saturday:

I could stand in the middle of 5th Avenue and shoot somebody and I wouldn't lose any voters, OK? It's, like, incredible.

The comments were greeted by laughter and applause, and the inevitable wave of Twitter jokes:

To us, the scariest part of that video isn't the bit about shooting someone. It's Trump's absolute certainty that "My people are so smart." We know he's said it before, but he really seems to believe it. Also, we would be very remiss if we didn't share our favorite headline to come out of the stupidity, from a pleasant little Onion wannabe with perfect pitch:

Bravo, nicely played, and all that.

Thank you, Captain Literal. Time to start marketing the Jeb dolls where you pull the string and the doll says "You are hearing me talk."

Marco Rubio was almost as scathing in his reaction, says The Guardian's Sabrina Siddiqui:

See, that's why Rubio's considered one of the "moderates."

To be fair, it's difficult to imagine much of anything topping the Palin endorsement anyway, short of the moment at this summer's convention when Trump will finally remove that ridiculous mask to reveal that it's been Andy Kaufman in there since 1984.

Following his speculation about how shooting someone would not deter anyone from voting for him, Trump closed the speech by announcing he was bigger than Jesus, screaming like Howard Dean, explaining that women can't get pregnant following a legitimate rape because the female body has ways to try to shut that whole thing down, insisting that there was no Soviet domination of Eastern Europe, driving Mary Jo Kopechne off a bridge, and riding around in an Abrams M1-A1 tank while wearing a funny helmet that made him look like Snoopy. His Iowa and New Hampshire poll numbers immediately shot up by seven points.

Yr Wonkette attempted to reach Mr. Trump early Sunday morning for comment on his apparent discovery of a form of political Teflon that puts Ronald Reagan's to shame, but were informed by Trump aide Krystal Nacht that Mr. Trump was unavailable, as he was still in bed with both a dead girl and a live boy.

Reminder to commenters: Yes, the Rules for Commenting Radicals still apply. You may not wish for Mr. Trump to shoot himself, but you may wish for him to die lonely and ignored, of natural causes, long after everyone's forgotten him.