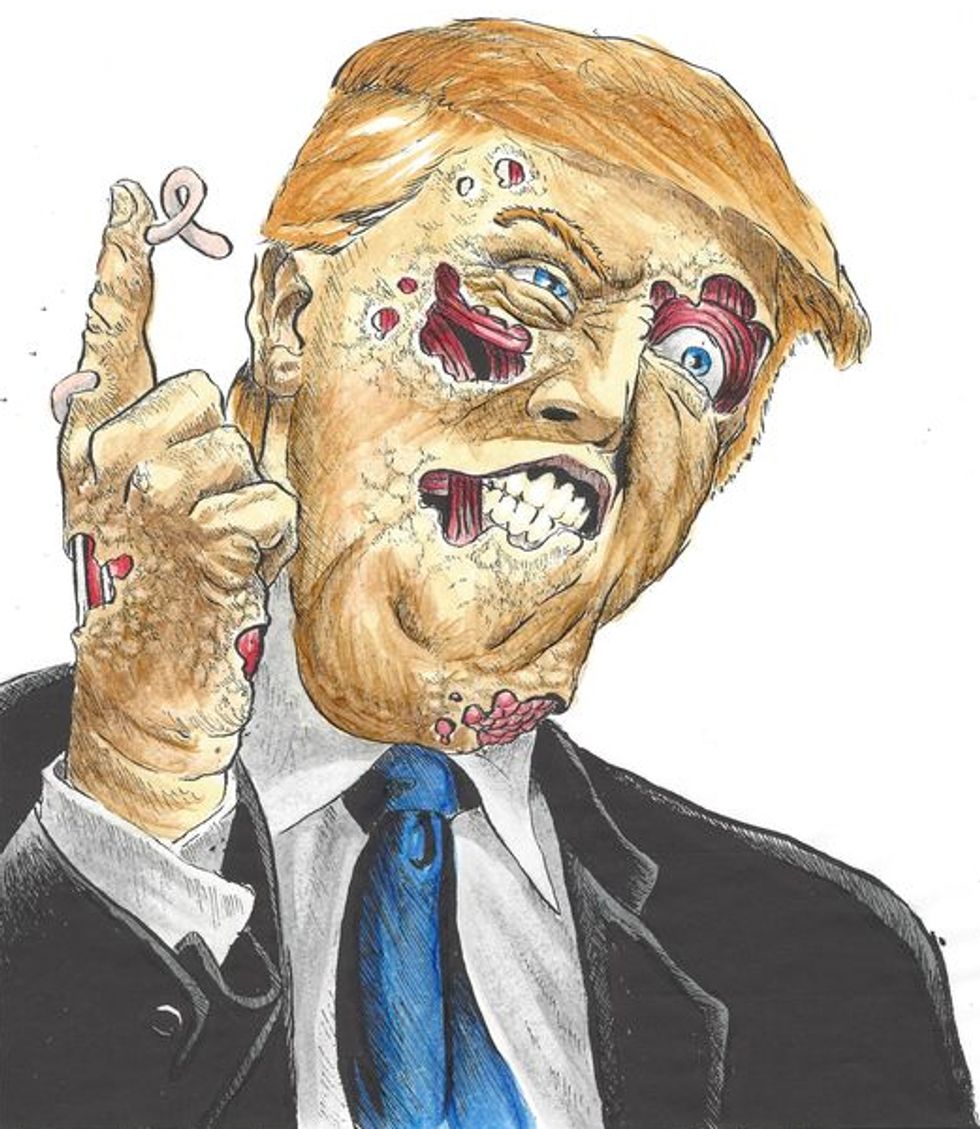 Oh, thank Crom, David Fahrenthold is investigating Donald Trump's weirdass businesses again, this time bringing us a story about the strange history of Trump's attempts to build a cemetery at his golf course in New Jersey. Or maybe he's abandoned the plan. Or maybe he wants to build two cemeteries at the Trump National Bedminster golf course. Like health care, it's complicated.

One plan is to build a small family cemetery with just ten plots, enough for Trump himself -- maybe -- and several horcruxes, a few years' worth of tax returns, or possibly even family members, presumably after they're deceased. As recently as a 2014 filing, the Trump Organization said Trump had always dreamed of being placed in a hole on his golf course:

Trump's company also submitted plans for a 284-plot cemetery that would sell lots to the public, for those who dream of being buried near a serial liar, self-admitted grabber of women's nethers, and bankrupt businessman. But it's not at all clear what, if anything, will come of any of it, says Fahrenthold:

But Trump has been talking about cemeteries here for 10 years — and he’s shown the same unpredictable decision-making style about his death that he has about so many things in his life. His plans have gone through at least five major overhauls. Trump has reconsidered his own burial spot at least twice.

Smart folks! If it involves Trump, there's probably a scam in there somewhere. The two applications have been approved, but it's anyone's guess whether any bodies will be buried at Trump National at all, now that Mr. Trump is President and he has much far more grave matters on his mind, like whatever weirdass conspiracy he sees on Fox or Breitbart. Remember, he's left all the business decisions up to his sons, Asshole Jr. and The Other Asshole, so they'll be the ones to decide what, if anything, to do with those approved cemetery plans. Neither the Trump Organization nor The Other Asshole would reply to Fahrenthold's queries. Fahrenthold notes there's already a Trump family plot at a cemetery in Queens, where the president's father, mother, and brother Fred are buried.

Trump first floated the idea of a private mausoleum at Trump National in 2007, saying the area "is such beautiful land, and Bedminster is one of the richest places in the country.” Wouldn't want to spend eternity in a downscale zip code.

The plan was big: 19 feet high. Stone. Obelisks. Set smack in the middle of the golf course. In Bedminster — a wealthy horse-country town 43 miles west of New York City — officials had some concerns about hosting a reality TV star’s tomb. The huge structure would seem garish, out of place. And there were ongoing worries that the spot might become an “attractive nuisance,” tempting curiosity-seekers to trespass on club grounds.

The tomb would be versatile.

“We’re planning a mausoleum/chapel,” Trump said, according to a news report from the time.

Town officials didn't buy it; one said he didn't think anyone would want to get married in a mausoleum, which just goes to show how poorly the man understood American celebrity culture. Hell, in 2007 you could have hosted a goth wedding every week. Sad! Also, "Mausoleum Wedding" would make a great name for a band.

In any case, a Trump representative said Trump had changed his mind and didn't want to be caught dead in New Jersey (like most Manhattanites, you know what we're saying?).

Then Trump floated other plans, like maybe a thousand-plot cemetery where he would be buried in a regular grave, not a mausoleum, and then other people would pay big money to get a plot near his decaying mortal remains. Ed Russo, a consultant who represented Trump in that attempted deal, said the appeal was obvious:

It’s one thing to be buried in a typical cemetery [...] But it’s another if you’re buried alongside the fifth fairway of Trump National.

Hmm... it would indeed be another thing. Then the plan was revised downward once more, to a ten-grave cemetery for Trump and selected family members:

“Only the good Trumps,” Russo said, according to a video of the town land use board. He did not elaborate.

So the town and state approved presumably because the thing would never be filled, and granted a cemetery license that the Trumps have yet to use. Maybe instead of Bedminster, Trump wanted to be interred at Mar-a-Lago. Or for all we know, have his ashes shot out of a cannon like Hunter S. Thompson's. Either way, Russo came back with yet another plan, this time for a 284-grave cemetery that would be run by a nonprofit and managed by the golf course, to be used to bury residents of Bedminster, veterans from or with family in the area, or members of Trump's golf course. That plan was approved, too, though Fahrenthold notes it doesn't seem to make a lot of business sense, since it wouldn't make much money and wouldn't plant more than a couple people a year.

Ah, but maybe it was all a property tax dodge, since nonprofit cemeteries are untaxed? Possible but not likely, since Trump had already reduced his tax liability in inimitable Trump style:

He had convinced the township to declare a farm, because some trees on the site are turned into mulch. Because of pro-farmer tax policies, Trump’s company pays just $16.31 per year in taxes on the parcel, which he bought for $461,000.

That's Our Donald! (This would make a fine sitcom, we think.) So nobody knows. A White House spokesperson didn't know where Trump wants to be buried, or even whether he intends to shuffle off this mortal coil at all (remember, one of his pals is immortality fan Peter Thiel). But we have to admire Mr. Fahrenthold's doggedness in trying to exhume the truth:

Seeking answers, The Washington Post reached Russo, the consultant who had spent years as the point person for Trump’s cemetery plans. Russo has written a book about his work with Trump on various land-use projects. It is called “Donald J. Trump, An Environmental Hero.”

We'll go out on a (tax-free) limb here and bet that one's going to be self-published. Should make for great compost, though.

[Yr Wonkette isn't tax-free, but it's definitely ad-free, and we depend on reader contributions to keep us from ringing down the curtain and joining the choir invisible. Won't you please send a generous contribution now? It's far better than nailing our feet to the perch.