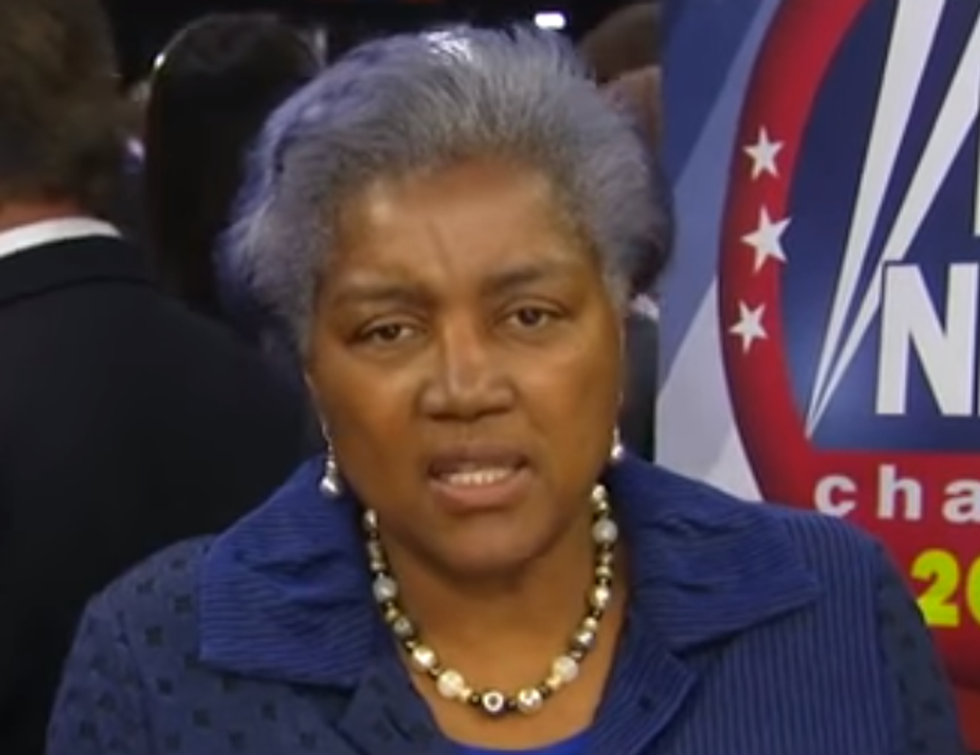 THIS. CHANGES. EVERYTHING. And by "this changes everything," we mean Donna Brazile has a book to sell and for some reason (page views) she chose to share an excerpt that has "revelations" about how the Democratic primary was "rigged" by "Hillary Clinton" and blah blah blah ZZZZZZZZ ALREADY BORED. Let's excerpt some things and say "WHOA IF TRUE" like we mean it and then we can move on, OK?

Oh boy, this better be good! We're going to be super disappointed if Politico oversold a story that's neither new nor shocking, and that actually isn't evidence of "Hillary Clinton's secret takeover of the DNC," just to get clicks! (SPOILER: Politico did exactly that, and is hereby invited to get fucked.)

Let's see how it starts:

Before I called Bernie Sanders, I lit a candle in my living room and put on some gospel music. I wanted to center myself for what I knew would be an emotional phone call.

Who among us has not wanted to create a little ambience before dialing Bernie Sanders on the telephone?

Basically, when Brazile came in as the interim director of the DNC, she had somehow gotten high on the supply of hacked DNC emails that PROVED (did not prove) Hillary had RIGGED (did not rig) the primary against Bernie Sanders. So Brazile put on her best Inspector Gadget outfit and decided to get to the bottom of it.

What she discovered next was a crystal skull that telepathically told her age-old secrets about how the Holy Grail is actually the dead body of Mary Magdalene, who despite what you might have learned in Sunday School, was totally banging Jesus. Just kidding, Brazile discovered that the Democratic Party was in debt and that "Hillary for America (the campaign) and the Hillary Victory Fund (its joint fundraising vehicle with the DNC)" had bailed the party out and basically controlled the DNC coffers for the purpose of getting Democrats elected. She also discovered that Debbie Wasserman Schultz had not been very good at leading the party, so that's some breaking news we've been aware of for years.

Individuals who had maxed out their $2,700 contribution limit to the campaign could write an additional check for $353,400 to the Hillary Victory Fund—that figure represented $10,000 to each of the 32 states’ parties who were part of the Victory Fund agreement—$320,000—and $33,400 to the DNC. The money would be deposited in the states first, and transferred to the DNC shortly after that. Money in the battleground states usually stayed in that state, but all the other states funneled that money directly to the DNC, which quickly transferred the money to Brooklyn.

“Wait,” I said. “That victory fund was supposed to be for whoever was the nominee, and the state party races. You’re telling me that Hillary has been controlling it since before she got the nomination?”

This seems like a really boring book. But onward we must slog:

When I got back from a vacation in Martha’s Vineyard, I at last found the document that described it all: the Joint Fund-Raising Agreement between the DNC, the Hillary Victory Fund, and Hillary for America.

The agreement—signed by Amy Dacey, the former CEO of the DNC, and Robby Mook with a copy to Marc Elias—specified that in exchange for raising money and investing in the DNC, Hillary would control the party’s finances, strategy, and all the money raised.

Except wait, was Bernie Sanders also offered a joint fundraising agreement, and did he accept? YEP AND YEP, but as NBC's Mark Murray notes on Twitter, Bernie never used his.

We're sure you are dying to know how that phone call between Donna Brazile and Bernie went:

I had to keep my promise to Bernie. I was in agony as I dialed him. Keeping this secret was against everything that I stood for, all that I valued as a woman and as a public servant.

“Hello, senator. I’ve completed my review of the DNC and I did find the cancer,” I said. “But I will not kill the patient.”

But Bernie did not yell. He did not cry. He did not moan. (Of course, he yelled about it on the campaign trail when it suited his purposes. This was when Debbie Wasserman Schultz was still the head of the DNC, so Brazile wasn't exactly breaking any news with her AGONIZING PHONE CALL.)

In other news Democrats are supposed to care about right now, did you hear John Podesta's brother Tony is quitting the Podesta Group because he's apparently tangled up in this whole Paul Manafort Ukraine lobbying mess? According to Trump people, this proves #BothSidesDoIt and Democrats should have to answer for it. To which we also reply, "Oh."