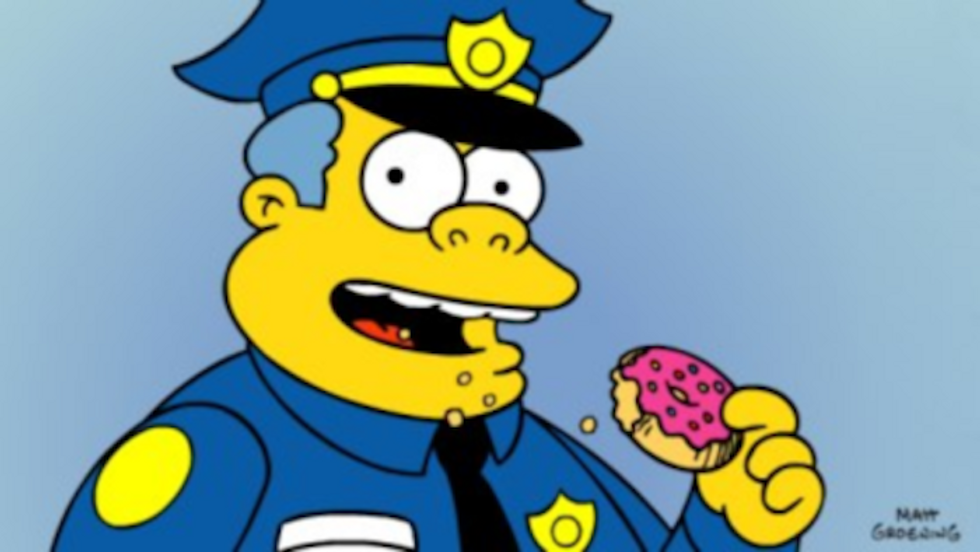 Oh good, it is the moment we have all been waiting for. The moment when a random donut chain decides it finally time to take a stand against all of those black football players that have been protesting police brutality against black people. I guess they know their customer base!

"Maple Donuts" (excuse me while I gag over the concept of maple-flavored anything other than syrup) of Pennsylvania has put up literal billboards that, rather than promoting donuts, state "Maple Donuts Takes A Stand, Not A Knee." Which is really just a weird thing to say when you think about it. When on earth would this be an issue for a donut shop? Is there a Donut Bowl that I am unaware of? I don't keep up on the sports!

In an article on WPMT FOX, highlighting the "online debate" about the sign, several people supportive of the sign explained they were pretty sure this had nothing to do with race, even though the thing the donut shop is mad about is black football players protesting systemic racism in police departments:

"He takes advantage of current events and incorporates it with his advertising, and he's done some really cool things, and you can`t blame him for that. That's good business, I think," said Joe Oaster. "I don't see race in that at all. We can all look at an apple and see different things." [...]

''I didn't think about it as a race thing. I thought about it more as a football thing. It could be misinterpreted," said Sarah Sloanaker of York County.

It's not the first time maple donuts has used a social issue in an advertisement: an OJ Simpson reference here. This current billboard though? Not a means to divide, according to [Maple Donuts manager Jim Nelson].

"Absolutely not. Charlie and our company is 100 percent patriotic. It's pushing the envelope a little bit, and Charlie's personality is coming out in those billboards," he said. [all the SIC]

It really does boggle the mind. Is it possible people don't know why the players are protesting, and that they genuinely think that the whole point of this is to "disrespect the anthem" for no reason, or like, a football-related reason? (YES, if you are wingnut hate-shouter Tomi Lahren, and it's a known #ScienceFact that 6 out of 10 #RealAmericans are, in fact, Tomi Lahren.)

Naturally, Breitbart picked up this little news tidbit, and its commenters were somehow even more confused about the kneeling than those highlighting the article were! Surprise!

I am particularly fond of this guy who for some reason thinks protesting police brutality has something to do with Common Core?

How would those things even be related? I am so confused.

And then there are the people who, like those mentioned in the initial article, can't figure out what this sign has to do with race. It is a mystery! A mystery that somehow involves none other than the international super villain out to take over the world for no apparent reason, George Soros!

Or, perhaps, the random "commie" who invented the word racism, for the purpose of dividing us all. You know, because we were all so united back when bathrooms and schools and buses were segregated. The really racist thing was pointing out that was racist. Obviously!

Of course, the actual person who first used the word "racist," according to the Oxford English dictionary, was Richard Henry Pratt -- who was not, in fact, a communist. Breitbart readers, however, may appreciate that, despite his opposition to racial segregation, he was a total dickwad to Native Americans, and also famous for the charming turn of phrase "Kill the Indian ... save the man." (Which makes me suddenly feel really weird about the tagline for the show "Heroes.")

The Breitbart readers apparently also fear it's now very hard to invite one's Asian-American neighbors over for dinner. Do you serve rice or do you not serve rice? Which one makes you racist? They're not sure! What do they doooooooo?

I'm just gonna say that if you can't figure out how to have a normal dinner with your Asian American neighbors, said neighbors would probably be perfectly happy with not having dinner at your place. In fact, you should probably just avoid humans altogether if you can't figure out an etiquette thing as simple as Hey, I was thinking of making this thing for dinner. Do you like that? If not I can make something else!

At this point, maybe you should just limit your diet to pro-police brutality donuts?

ANYWAY! It is now your open thread! Go forth and be way smarter than the Breitbart commenters! And maybe drop some money in our tip jar while you're at it?