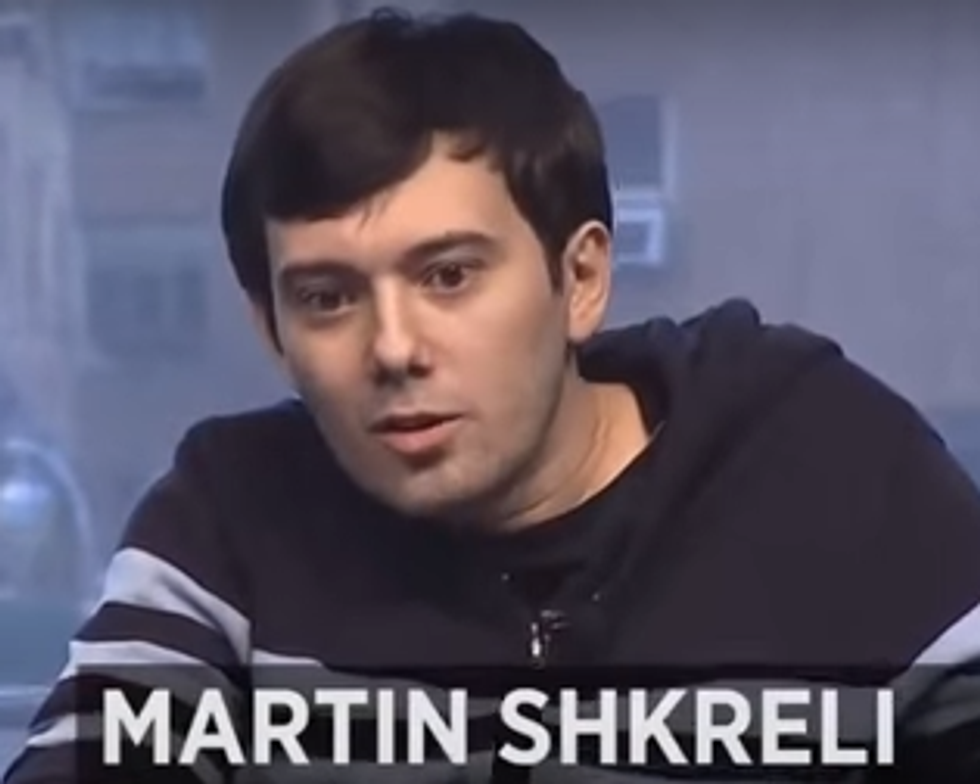 Bloomberg has the backstory on what Shkreli just bought for 2 million Amero bucks:

In March 2014, Robert Diggs, better known as RZA, the producer and de facto leader of the Wu-Tang Clan, the iconic rap group, announced that the Clan would create only one copy of its next album, Once Upon a Time in Shaolin, and sell it to the highest bidder. “We’re about to put out a piece of art like nobody else has done in the history of music,” RZA told Forbes. “We’re making a single-sale collector’s item. This is like someone having the scepter of an Egyptian king.”

And Martin Shkreli winned the bidding! Now far be it from us to deny a rich man his sacred right to buy really cool shit the rest of us peons don't get to have. But you'll excuse us if we suggest he's doing this more for "I am a giant dicksnot dildobreath virgin" reasons, than for his love of music.

Granted, Shkreli has had his grubby hand in the music business before, as Stereogum 'splains:

Shkreli was the main investor behind Collect Records, the label run by former Thursday frontman Geoff Rickly, and Rickly had to make the difficult decision to sever all ties with Shkreli, once he learned that Shkreli was a greed-driven sociopath, even though the decision put Rickly’s label in peril.

Bloomberg reports that during negotiations for the record (which was stored in freaking Marrakech while it awaited its new owner, and "comes in a hand-carved box, with a leather-bound book of parchment paper, and a pair of custom speakers worth $55,000"), The Asshole was all worried Wu-Tang Clan wouldn't like him, because that's when the world was finding out he was a price-gouging shitcanoe who would throw fucking AIDS patients in front of a moving train if it made him a dollar:

Breaking news, dude: Everybody in the world hates you, because you are the human equivalent of a radioactive smegma waterfall, and you just keep making it worse. For instance, earlier this week, Shkreli made headlines again when he said the only reason he would call backsies on the last few months of his life is to "have raised the price higher" on the AIDS drug.

So pharma douchebro has his special secret Wu-Tang record, which he's free to share with the public if he wants (but probably won't because obvious), or maybe he can charge AIDS patients $750 to listen to it. Originally, the contract stated it couldn't be released to the public for 88 years, but according to Bloomberg, that wasn't part of the final deal. But there is a tiny piece of good news:

In a statement, RZA says that after he learned about Shkreli’s business practices, the group “decided to give a significant portion of the proceeds to charity.”

RZA doesn't say where he sticked the money (an AIDS charity maybe?), but we're sure glad to hear that jizzwhistle's money might do some good for somebody out there.