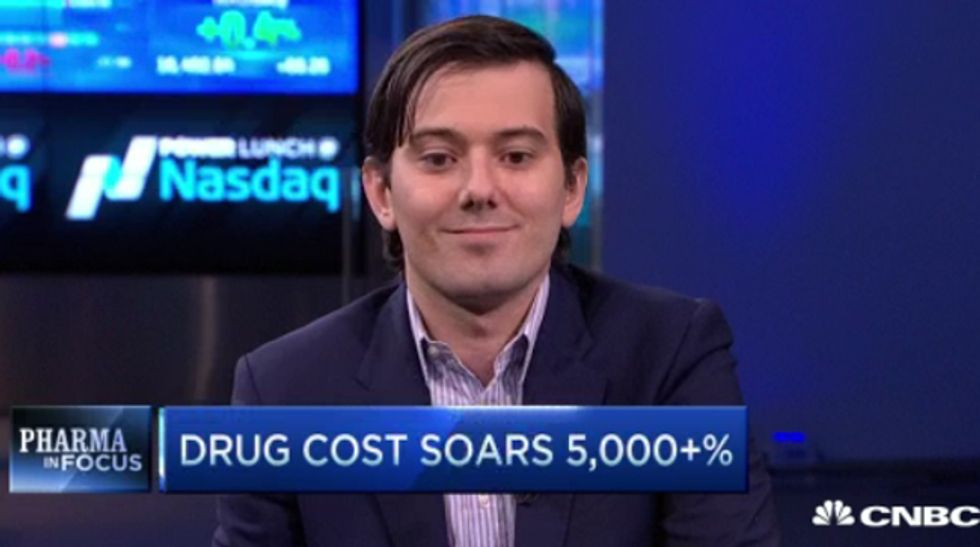 This guy's smirk illustrates the entry for 'backpfeifengesicht' in several dictionaries

In an age when there's so much division and hate, it's nice when people from all walks of life can come together in agreement on one thing: Martin Shkreli, the CEO who raised the price of a lifesaving drug for a rare disease, from $13.50 to $750 a dose, so his company, Turing Pharmaceuticals, would become profitable overnight, is an asshole. Even a lot of the people who support his decision seem to at least agree on that. The internet went into Full Outrage Mode over the weekend after a New York Times story on the price-gouging douchebro, who in August bought a small pharmaceutical company that controlled the drug Daraprim largely for the chance to raise its price to astronomical levels. That's some market, that free market.

Daraprim has been around for 62 years and isn't particularly costly to make. It used to sell for $1 a pill, until its price was bumped up a few years ago, after a previous buyout. It's the preferred treatment for toxoplasmosis, the disease spread by a bizarre parasite that lives in cat shit. As the Times story explains, toxoplasmosis "can cause serious or even life-threatening problems for babies born to women who become infected during pregnancy, and also for people with compromised immune systems, like AIDS patients and certain cancer patients." It's a relatively rare disease, requiring only about 12,700 prescriptions a year. But thanks to Shkreli's brilliant decision to jack the price, hospitals are already having difficulty getting the drug, and they worry they'll have to start using alternative treatments that are less effective.

But Shkreli doesn't see why anyone would make a big deal about this. After all, isn't making a profit the whole point of business? He claims that the price increase will make it possible for Turing to develop a new, improved version of the drug with fewer side effects, not that the medical community has been clamoring for such a thing.

“This isn’t the greedy drug company trying to gouge patients, it is us trying to stay in business,” Mr. Shkreli said. He said that many patients use the drug for far less than a year and that the price was now more in line with those of other drugs for rare diseases.

“This is still one of the smallest pharmaceutical products in the world,” he said. “It really doesn’t make sense to get any criticism for this.”

Jesus, calm your tits, people. A guy has to be able to afford his helicopter and his good wine, after all. Besides, since it's such a rare disease, the important thing was that nobody was getting rich off it like a lot of makers of other "orphan drugs" have, so really, it's only a market correction. Bummer about your sick baby, but not exploiting this sucker for all it's worth would be unnatural.

The Times also notes that not everyone will be gouged, just almost everybody:

Medicaid and certain hospitals will be able to get the drug inexpensively under federal rules for discounts and rebates. But private insurers, Medicare and hospitalized patients would have to pay an amount closer to the list price.

Here's Shkreli in full-charm mode on CNBC. The little smirk he breaks into at the end of every statement is meant, we think, to denote sincerity, but instead comes off as sheer assholery. Crowning moment of douchebaggery in the video? Asked if he's reconsidering the price hike, Shkreli simply says "No," and flashes that fucking smirk again. Watch:

Since Daraprim's patents have expired, a competitor could, in theory, produce a generic version. But distribution of the drug is tightly controlled, making it difficult to acquire a sample. And there's simply not much profit in a generic version of a drug that's rarely prescribed, however desperate those who would benefit from a cheaper version might be. Thus, the company's appeal to Shkreli, who knows an opportunity to exploit market dominance and gouge sick people when he sees one.

Ah, but Martin Shkreli isn't merely a loathsome price-gouger! As Rawstory details, he's also being sued for $65 million in damages by the company he founded in 2009,whose board voted to oust him last year after concluding that he'd been involved in sleazy stock deals. The lawsuit accuses Shkreli of using the biotech company "as his personal bank" to pay off losses in a hedge fund that he also managed. On top of that, he allegedly threatened a former employee of that hedge fund, sending a letter to the former employee's wife that, according to the employee, read: “I hope to see you and your four children homeless and will do whatever I can to assure this." Also, we're fairly sure that the ghost of pioneering computer genius Alan Turing is pretty pissed that his name is in any way associated with this asshole.

He seems nice. Especially as a poster boy for why we need a single-payer healthcare system.