Dr. Ben Carson Was Big Fan Of Using Baby Parts Back In His Doctorin' Days 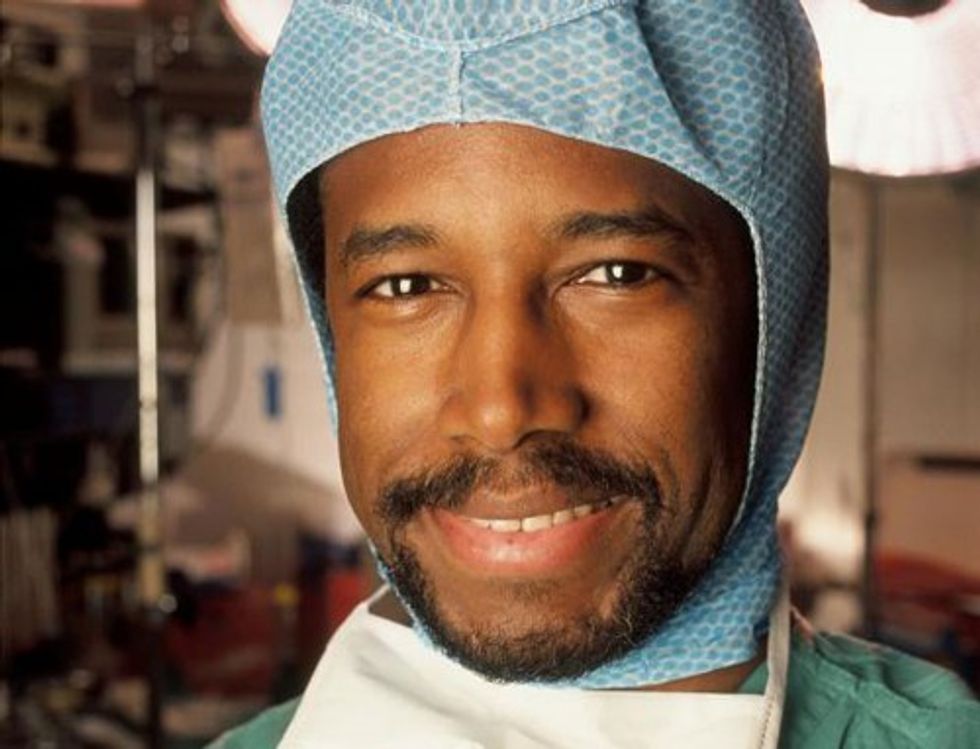 OOH! OOH! BREAKING FETUS PARTS NEWS! You know how "pro-life" Ben Carson is running for president, but before that, he was the BEST doctor in all the land, and the first person ever to separate twins conjoined at the head? And know how Carson, as a doctor, recently offered his very medical opinion that not only is Planned Parenthood chopping up babies and auctioning them off on eBay (no it's not), but it also does racist genocide to the blacks, racistly, because this one time Margaret Sanger, blah blah blah bullshit? Yes well, Dr. Jen Gunter, a ladyparts doctor-blogger who specializes in "wielding the lasso of truth," uncovered a fun little nugget of information, which is that the very same Ben Carson not only did research on fetal tissue, but also wrote papers about it like he's not even ashamed of it! Who's the racist genociding Planned Parenthood baby parts secret shopper now, HUH?

While opining on the uselessness of fetal tissue research to Megyn Kelly Dr. Carson neglected to mention his own paper Colloid Cysts of the Third Ventricle: Immunohistochemical evidence for nonneuropithelial differentiation published in Hum Pathol 23:811-816 in 1992. The materials and methods describe using “human choroid plexus ependyma and nasal mucosa from two fetuses aborted in the ninth and 17th week of gestation.”

Yes, Dr. Ben Carson has done research on fetal tissue and published his findings. His name is on the paper so that means he had a substantive role in the research and supports the methods and findings.

How does one explain this given Carson’s stand on fetal tissue research?

One doesn't. All that science-y doctor writing right there only proves one thing, and it is that Ben Carson is the REAL ABORTIONISTA. And ooh, ooh, Dr. Gunter has PICTURES!

BUSTED, Buster. This is all super weird, too, because as Dr. Gunter reports, Carson recently told Megyn Kelly, "There’s nothing that can’t be done without fetal tissue." Guess Carson only used it because he LOVES IT SO MUCH.

What's more, like a common baby-killing Obama, he's not even sorry:

"You have to look at the intent," Carson said before beginning a campaign swing through New Hampshire. "To willfully ignore evidence that you have for some ideological reason is wrong. If you’re killing babies and taking the tissue, that’s a very different thing than taking a dead specimen and keeping a record of it."

But Planned Parenthood is not "killing the babies and taking the tissue," and Ben Carson, who would like to remind everyone that he is the best neurosurgeon EVER, fucking KNOWS that. He knows full well that this is the exact same thing as the fetal tissue research he did in 1992, and that it's not like you go to some special counter at the Planned Parenthood, and instead of a tank full of live lobsters, it's a tank of live babies, and you pick the one you like, so you can do the fetal research you're a-hungerin' for. HE KNOWS THIS, and he is LYING. (Unless he really is a stupid man and that successful conjoined twin surgery was just a lucky guess.)  In fact, any American who actually thinks the scenario we just described is plausible needs to have his or her head checked for heretofore undiscovered trauma.

And remember how, ACTUAL SCIENCE FACT, research using fetal tissue is not only important, but actually VITAL to many fields of study, like curing blindness and creating so many vaccines, so that instead of having "hepatitis A, German measles, chickenpox and rabies," people just get a spot of autism and everything's okay? (People do not get any autism spots from vaccines, that was for a joke.) Dr. Gunter reports that fetal tissue is also being used to develop a vaccine for Ebola. Would that we had that during the big Ebola scare, when like three Americans got sick from Ebola!

Dr. Gunter says it's shameful as fuck that Dr. Carson is "spouting off" about how "worthless" fetal tissue research is, since he used to slurp the stuff up back in the '90s. And maybe he's being shameful and shameless and shametastic and all the other "shame" words, but remember, there is always the possibility that Dr. Ben Carson, greatest doctor alive, is secretly a dumbfuck.