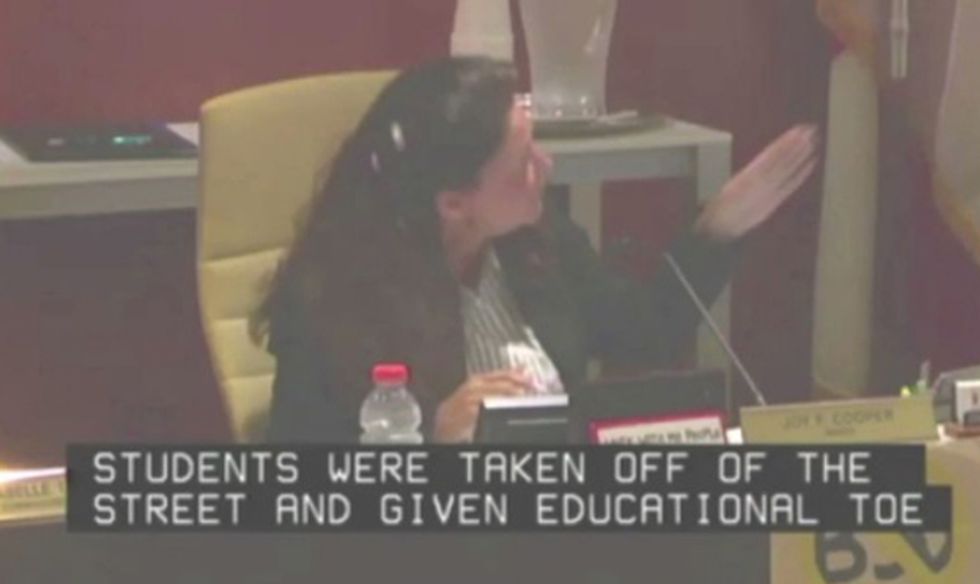 Any similarity between closed captions and actual statements purely coincidental

Mayor Joy Cooper of Hallandale Beach, Florida, was not having a great night at last Wednesday's city commission, repeatedly slurring her words and appearing, at best, to be looped, trashed, three sheets to the wind, sozzled, soused, in her cups, and otherwise suffering from some sort of impairment that others on the commission believe may have been the result of intoxication. You know, allegedly.

She spoke of a "disservice to dismocracy," the "intristic value" of something, wanted the city manager to "hear the whole sistory," and passionately but nonsensically decried "this anti-culture of government and distrust that has continued to be participated particularly by you and particularly by my colleague of the left!" When another member of the commission called Mayor Cooper "an embarrassment," Cooper shot back, "I didn't innosut, intersult, insult you!" It's a bit painful to watch:

After a while, Cooper stood up, said she wanted some water, and said the meeting should be recessed. But she didn't go to a fountain; instead, she "began walking around on the dais arguing with colleagues," according to TV station WPLG.

Deputy City Manager Nydia Rafols-Sallaberry called Cooper's husband, Harry, and asked him to please come and collect the mayor, but when he arrived, Harry Cooper had a few choice words for Vice Mayor Keith London, who was videotaping the spectacle. We can't hope to top WPLG's reportage of the ensuing hullabaloo and fracas:

After police moved him from that situation, he began accosting City Manager Roger Carlton while being forcefully restrained.

"You're gone in February, you know that?" Harry Cooper shouted at the manager. "You don't have more than two votes ... it's a no!"

"He's ready to be arrested," a calm Carlton said.

"I'm not ready to be arrested!" Cooper shouted back. "I'm allowed to talk. This is free speech. You're gone in February. Gone!"

Police physically removed Harry Cooper away from the manager.

"How come he's the only city manager with his thumb up his ass?" Harry Cooper asked.

The mayor by this time had apparently gotten her second wind, and said she didn't "appreciate people saying I'm drunk," following that by joining her husband in abusing Mr. Carlton:

"I don't respect you," she said. "I think you're a liar. I still haven't figured out why you're here and why you stayed here."

She demanded that he resign before he was "embarrassed."

Cooper then continued with the meeting, and when commissioner Michele Lazarow said she believed Cooper was intoxicated, Cooper took the opportunity to mock Lazarow, who WPLG reports has been in recovery for addiction for 18 years:

"The poor girl had a mental problem," Mayor Cooper said.

"Are you talking to me?" Lazarow asked.

"Yes, I am talking to you," Cooper said.

"You are a liar and you're stoned, so I'm going to forgive you today because you are stoned," Lazarow said.

Mayor Cooper denied having been under the influence of anything but the terrible water in Mexico, where she had recently vacationed, saying that she had a case of "Montezuma's revenge." She simply wasn't at her best Wednesday, she said, because she'd been on a diet of little more than "rice, bananas and Gatorade."

Yr Doktor Zoom is not a physician, but we checked WebMD and did not see "slurred nonsensical speech" or "loutish threats" among the common symptoms of what's commonly called "traveler's diarrhea."

London and Lazarow, who apparently have a history of contentious relations with Cooper, sent a letter Friday to Gov. Rick Scott to ask that Cooper be removed from office for being unfit. Cooper has been mayor of Hallandale for 12 years and had said earlier this year that she wouldn't seek reelection in 2020, but told the Broward County Sun Sentinel Friday that she had changed her mind, tell you what:

Presumably at that point she climbed on a table and began insisting a D-9 Caterpillar bulldozer couldn't drag her from office, and she wouldn't listen to any of her enemies or the sinister forces directing them, because she is MAYOR FOR LIFE, GODDAMMIT, and she knows that YOU stole her strawberries and are out to take the Precious, but she won't let you, she won't!

That's about as Florida a story as we could hope for, and it is now your Open Thread.

Yr Wonkette is supported by reader donations. Please click here to help us stay slightly more sane than any given elected official in Florida.