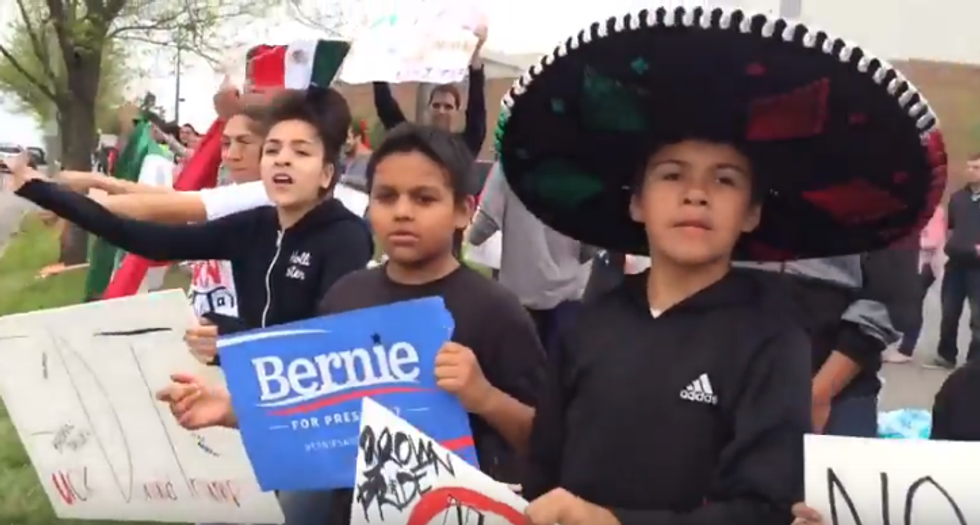 DRUDGE SIRENS AND ALL THE OTHER THINGS THAT MAKE YOU SAY "WHOA!" Matt Drudge found some kids cussing:

Sounds like front page news aggregator website material! And if we go to the video, we do find children of the Hispanic persuasion making sailors blush with their potty mouths, and they're doing it right at passing Donald Trump supporters!

Let's click Drudge's breathless link to learn about the growing and terrifying threat of kids saying "fuck," shall we?

The kids, wearing sombreros and ironically holding signs reading “No hate,” screamed “F*ck you!” repeatedly at the passing motorists.

One of the children in the center of the action could be seen wearing a Bernie Sanders sticker.

Hillary Clinton campaign signs could also be seen in the crowd.

Let's all race to the fainting couch and make a puppy pile of white people experiencing the vapors!

Now look, you sombrero-wearing children, you should stop cussing RIGHT NOW. That might seem hypocritical coming from yr Wonkette, where sometimes every other word is the F-word or the S-word or even some other potty swears! But kids aren't supposed to cuss, according to our mom and dad, so there is that. Also, there are so many fun words in the English AND Spanish languages that aren't cusses, but are GREAT things to call stupid Trump supporters. How about "squirrel-romancing, Hoveround-humping shut-ins"? See, that doesn't even have ONE "fuck" in it.

We do love, though, how Drudge and the wingnuts he aggregates immediately assume the kids are all DREAMers, because suggesting that they're undocumented immigrants is WAY scarier to their readers than Hispanic kids who were born here screaming "Fuck you, puto!" Are some of them DREAMers, in actuality? We dunno, maybe!

However, there are TONS of Latin Hispanics who are American citizens and also voters! And surprise, a lot of them (and their kids) dislike Trump supporters, apparently enough to say swears! Wonder why, hmmmm ...

[wonkbar]<a href="http://wonkette.com/586143/president-donald-trump-will-build-yoooge-gold-plated-fence-to-keep-out-messicans"></a>[/wonkbar]Oh, there's that thing about how Trump says Mexico is sending rapists to America. And that time those Trump supporters beat the shit out of a homeless Hispanic man. AND Trump said we should have invaded Mexico after 9/11.

Oh, and there is that thing about how Trump wants to build a YOOGE electrified diamond-encrusted border wall, to keep out brown people he doesn't like. AND he wants Mexico to pay for it, which led former Mexican president Vicente Fox to ALSO say the F-word. Stop teaching kids bad words, Vicente Fox!

So on balance, those kids shouldn't cuss at Trump supporters, unless they motherfucking want to, in which case, they should tell those rednecks to lube their dicks up with super glue and fuck their own ears. Get it? Because then, all the Trump supporters' dicks will be stuck IN THEIR OWN EARS, and that will definitely Make America Great Again.