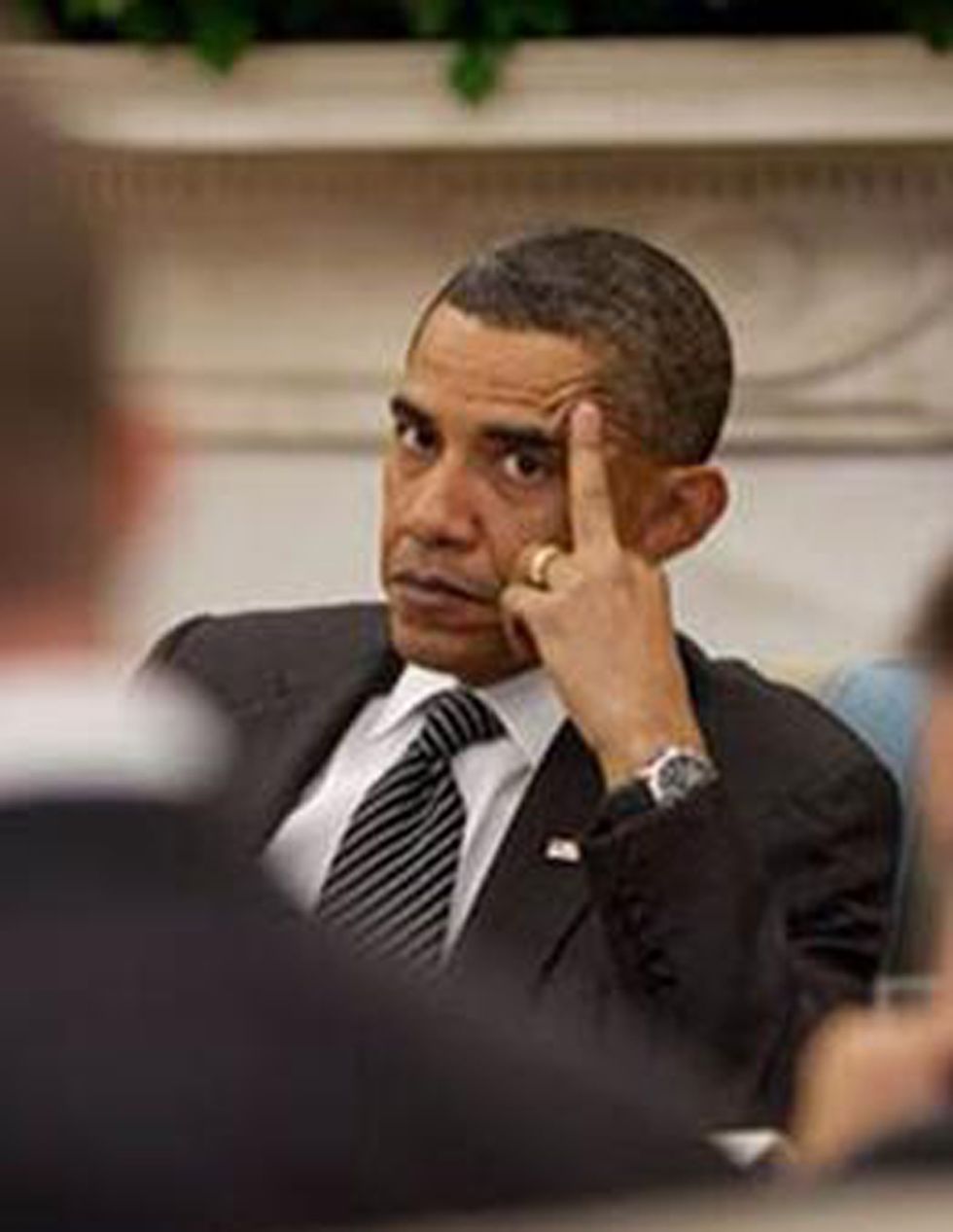 Here is an obviously true story for your Tuesday morning:

Oh, DRUDGE! We know your readers are about as politically savvy as expired smoked trout, but come on, you're linking to Infowars now like it's on an equal footing with other wingnut news websites like The Breitbart and the Daily Tucker? That's valid, actually.

Let's look at the article to see how very true it definitely is:

Former President Barack Obama has reportedly asked Jay-Z to encourage other hip hop artists not to meet with Donald Trump following the firestorm of publicity over Kanye West.

The claim is being made by pro-Trump activist Josh Cornett, who tweeted, “Sources are confirming that former President Barack Obama has called Jay-Z several times over the past month pleading with Jay-Z to discourage fellow Hip Hop artists from meeting with President Trump.”

MM HMM YOU BETCHA! That sounds like a "reporter" with a "source" who knows about Barack Obama's phone calls to Jay-Z!

Let's see what else "Josh Cornett" has "reported" on his Twitter:

Clapper Flies Into PANIC MODE Over Trump’s Latest Attack on The Deep State https://t.co/LhXdPvk9cr via @truthfeednews

Random Thought: What if the "Insurance Policy" discussed in Andrew Mccabe's office wasn't a plot, but was an actual item? i.e. Video? Documents? Tools of future blackmail? Jeff Sessions' hypothetical gay "acquaintance"? 🤔 probably not, but always stay outside the box!

Heh heh heh "stay outside the box" would be what Jeff Sessions would say to his Hypothetical Gay Acquaintance, WAIT WHAT? These never-nude right-wing Trump idiots are now starting gay rumors about poor old Butterbeans? Fuckers crazy.

Cornett's whole Twitter feed is very funny, especially the parts where he gets really excited about court filings from the silly wingnuts over at Judicial Watch, which is perhaps the only group of lawyers in America that makes Michael Cohen look like a bright shining legal mind.

Anyway, back to the INFOWARS DRUDGE HOT STEAMY SCOOP about Obama begging Jay-Z to stop black people from loving Trump too much:

The [Josh Cornett] tweet has received over 7,600 retweets and over 10,000 likes since being posted.

Well that tells you somethin'! Like, for instance it tells you that 10,000 people on Twitter are very stupid, but only 76% of them chose to spread their stupid further, by retweeting the thing.

Donald Trump Jr. also liked the tweet, leading some to speculate that he may know that the story is true.

LOLOLOLOL if hell is real, we imagine it feels like being trapped in a brain that thinks thoughts like "Donald Trump Jr. knows things" or "Donald Trump Jr. has a face that is similar to how human faces ought to look." Thoughts 'n' prayers for SOME WHO SPECULATE!

While the story remains unconfirmed

it would make political sense for Democrats to deter pop icons from being seen to endorse President Trump in any way as the mid-terms draw nearer.

Yes, somebody please stop the avalanche of celebrities and cultural icons rushing to endorse a shitty president they didn't like when he was just a low-class white supremacist celebrity grifter who pretended he was richer than he really is.

In the week after Kanye West tweeted his support for Candace Owens ...

Oh, the avalanche of celebrities is Candace Owens. Yep, she changed everything, all right. InfoWars also points out, for #journalism purposes, that Donald Trump's name has been in some hip-hop tunes.

Are we ever getting to the part about how Obama calls Jay-Z to beg him to issue a royal hip-hop decree to stop the entirety of Black America from suddenly falling in love with Trump? No, we are not, because this is not a news article. It was written purely to trick Trump supporters into trying to mash their baby's arm-sized fingers against the buttons on their computer mouse, trying with all their might to read the VERY HOT SCOOP, only to give up because their AOL suddenly says "GOODBYE!" like some kinda fuckin' dick, leaving them only with the #KnowledgeFacts contained in the headline.

Oh well, we are bored now. Guess we will go take a nap and have a nightmare about how the #Resistance was going just great until Kanye West changed everything and Obama tried to save us by talking on the phone with Jay-Z but he was too late, BLUE WAVE CANCELED, YOU GUYS, GUESS WE'LL JUST START WORSHIPING DONALD TRUMP NOW.