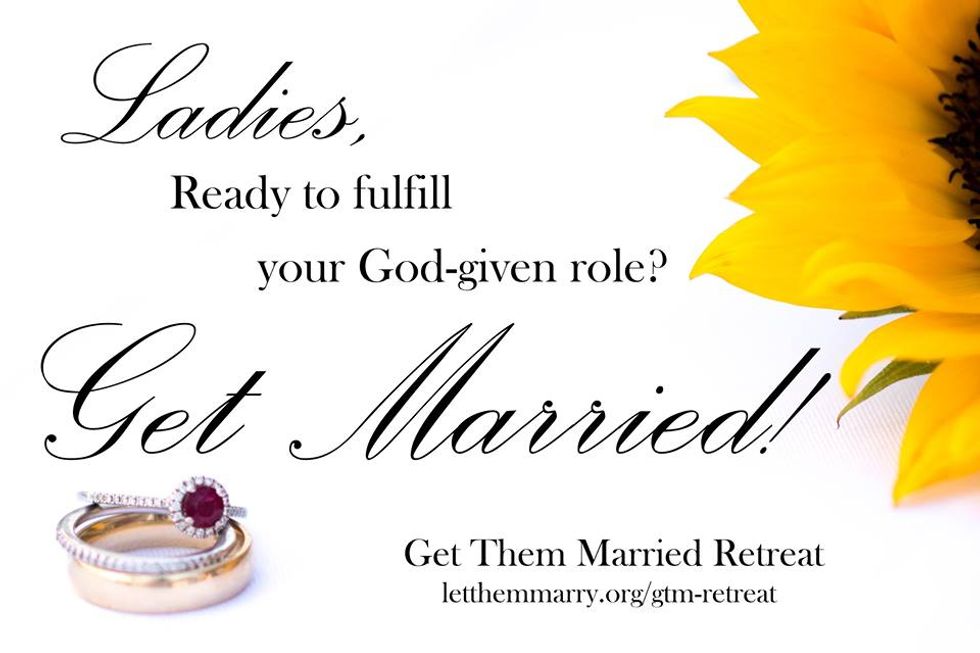 By 'ladies' they mean teenage girls.

Unsure about your vacation plans this year? Well, have I got some exciting news for you! Vaughn Ohlman, a big proponent of the Quiverfull movement -- you know, the Duggar thing where they have to have a bazillion kids so they can be arrows for Jesus in the war for souls? -- is hosting a special retreat this November for the holiest of the holy. Where, for the price of around $1200, parents can bring their kids, maybe go hiking in the woods or something, and then arrange a marriage for them!

It is called the "Get Them Married" retreat, and it is ... certainly interesting.

"The Get Them Married Retreat is a 3-day retreat designed to bring together like-minded families (and their unmarried young men and women) who are committed to young, fruitful marriage and to help them overcome the barriers which have kept their children unmarried. We will be having some teaching/testimony times, some 'icebreaker' games, and maybe just plain fun running around; but our major focus and priority will be bringing together unmarried young people and their families so they can intentionally network together with a goal of arriving at God-glorifying marriages."

The retreat is hosted by Ohlman's "Let Them Marry" organization, which promotes the idea that boys and girls should marry before the age of 20 and that their spouses should be picked out by their parents, with them having no say in the matter. Just like in the Bible!

This is him, by the way

There is SO MUCH that is amazing on this site, so let's take a moment to explore, shall we?

So, one thing they are not into is the idea of courtship. Why?

ALSO this, which I guess makes sense if you are being married off at an age when your parents can still ground you.

"Courtship advocates generally deny the continuing authority of the father over the married son.

Oh. That all seems normal, and like it will work out pretty well for everyone involved! But surely by now you are wondering -- at what age are my children ready for an arranged marriage? If you guessed after college, you are probably SATAN. Because according to this dude, everyone should be married before the age of 20! And you can start marrying them off as soon as they go through puberty! However, they are a little lax, and say that EVEN THOUGH John Calvin said a lady should be married off at the "flower of her age," which he defined as 12-20, they are cool with waiting until after the age of 12.

"Our position is that, for a woman:

1) The ‘youth’ ready for marriage has breasts. A woman who is to be married is one who has breasts; breasts which signal her readiness for marriage, and breasts who promise enjoyment for her husband. (We believe that ‘breasts’ here stand as a symbol for all forms of full secondary sexual characteristics.)

2) The ‘youth’ ready for marriage is ready to bear children. Unlike modern society Scripture sees the woman as a bearer, nurser, and raiser of children. The ‘young woman’ is the woman whose body is physically ready for these things, physically mature enough to handle them without damage.

3) The 'youth' ready for marriage is one who is ready for sexual intercourse sexually and emotionally. Her desire is for her husband, and she is ready to rejoice in him physically."

Waiting until she has breasts for her husband to enjoy? My, that is modern! It's almost like they're aware that we live about 40 years longer than people did in John Calvin's day or something!

But wait! What about payment for my virgin daughter, you are surely wondering by now!

"A "bride price" is anything paid or given by the man or his representative at the time of his betrothal or receiving his bride.

Scripture certainly teaches about it, but it is not mandated, however, except in the case of a couple of laws. The law concerning bride price (Exodus 22:16-17) indicates that part of the punishment for fornication with an unbetrothed woman is the payment of a "standard" bride price for virgins, indicating that the bride price was a normal part of the marriage process.

The bride price plays a significant function: It shows the woman's value, and the point isn’t that the father gets the money but that he keeps it for his daughter, if her husband should ever abandon her."

HMMM ... But what if my kid is not into that? UNPOSSIBLE, says Vaughn Ohlman! Because if you raise your kids right, they will be super cool with whomever you choose because Jesus and whatnot. He is very firm on the fact that your child does not need to like or be attracted to the person you decide they should marry, and that they should not feel romantically towards them at all until God says OK and they are married.

"A Godly man, raising Godly children, should raise them in such a way that they understand that, in general, the provision of a spouse is something that should come from their father. He should, in his conversations with them, assure himself of their understanding of, and compliance with, this concept. Then, when he has been assured, and when they are of an age where marriage is appropriate for them, he should agree with another father as to their betrothal. Then, in wisdom, he, along with the other father, should again go to his own child to assure himself of their integrity of purpose before announcing their new betrothed spouse to them. Then, the son or daughter, must “consent” to the marriage—but it is very important to realize that this type of “consent” is the kind of obedient consent we see in the examples of Adam, Eve, Isaac, Rebecca, and Christ. It is consent where the son or daughter, realizing that their father has bound them and then submits to the covenant as binding, recognizing the good gift their father has given them."

Oh, perfect. I bet you are all excited now to go to arranged marriage camp and set your child up with a spouse. At the very least, it will ensure they have a date to prom.

There is much, much more here, but I will leave you with these memes from their memes page (Oh yes, there is a memes page. You are welcome.) that I barely understand.

[Let Them Marry via Raw Story]