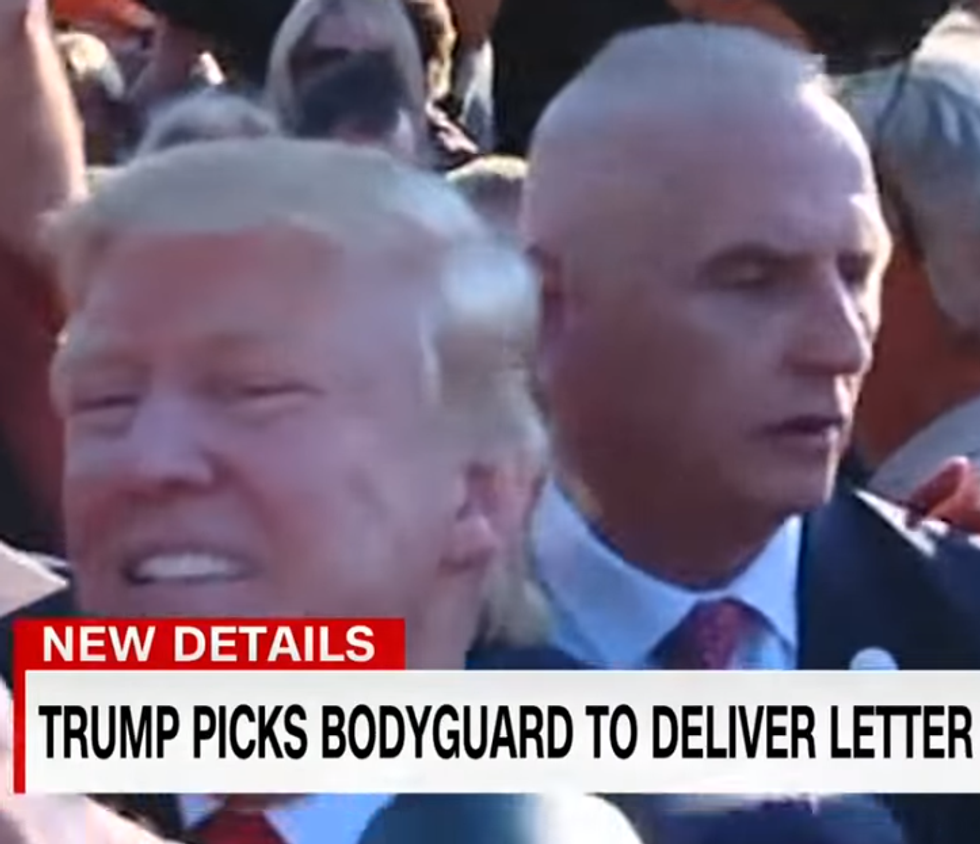 Behind every Trump is an even gooder "Keith."

Ding dong, another loser Trump goon is quitting to spend more time being a loser Trump goon OUTSIDE the White House! And this time it's a REALLY IMPORTANT ONE. His name is Keith Schiller, "Director of Oval Office Operations," and he is the dumb bodyguard muscle who has been by Donald Trump's beefy flaky side for two decades. He is one of Trump's bestest friends, and they trust each other. He will be going back to being a private security goon, where he will make many more ameros than his puny little government salary of a measly little $165,000 per year. This is the guy Trump sent to FBI HQ to fire James Comey, which was very DOY DOY DOY, because Comey was in Los Angeles at the time. Bloomberg notes that Schiller also did the "YOU'RE FIRED!" act to George Gigicos, who was canned because Trump was upset his tiny racist crowd at his recent Arizona Hitler rally was so tiny.

We are trying to decide which part of this report about Schiller leaving is the funniest. Is it that Trump is "crushed" about Mr. Keith leaving? Well that is pretty funny, because we like it when Trump is sad. Is it the part about how working at the White House is THE PITS now that General John Kelly has replaced Steve Bannon as the real president?

No, this is the funniest part:

He has said he believes that Kelly doesn’t like Trump personally and is serving as chief of staff predominantly out of a sense of duty to country, according to three people familiar with his views. That has been deeply demoralizing for Schiller, who is accustomed to Trump being surrounded by devoted employees, two people said.

DUTY TO COUNTRY? IN THE FUCKING TRUMP WHITE HOUSE? THIS IS UNACCEPTABLE.

We are gratified to know that John Kelly has good enough taste in men that he hates Donald Trump in his heart, though.

Bloomberg describes more elements of Schiller's hilarious sadness, like how he's not allowed to just curtsy and lollygag his way into the Oval anytime he wants anymore, and how there's literally NO POINT TO HIM BEING THERE, since all his "job duties" are ably carried out by others. It's hard out here for a hired private security goon when you've got the Secret Service all up in your business.

So what is this, the 54th person to quit working at White House since Trump fumblefucked his way through the oath of office? 78th? 966th? We lost count. We're just glad Kelly has claimed another Trump loyalist.

Hey John Kelly. Hey General Kelly! Hey! Hey! Do Stephen Miller next! Do it do it do it!

Wonkette salaries are paid by loving souls like you! If you love us, click the buttons below to pay us!