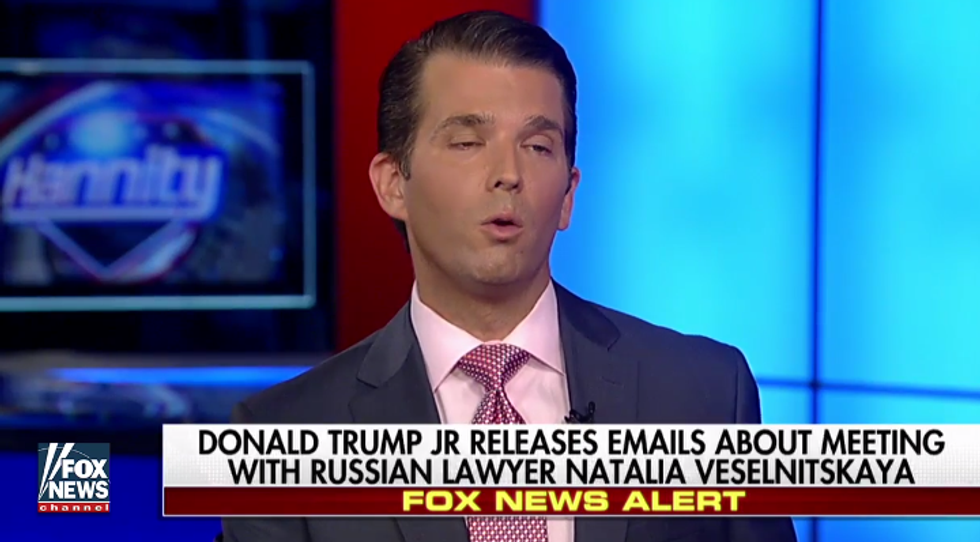 Remember Donald Trump Jr.'s FIRST LIE, when he said he only met Russian lady lawyer Natalia Veselnitskaya in Trump Tower with Paul Manafort and Jared Kushner so they could deal with pressing Bouncy Russian Baby problems? Guess whose lie that actually was? Surprise, it was the White House's lie! More specifically, it was the only lie White House staff came up with on the plane back from the G20 that Daddy Donald Trump would sign off on. Does that sound like a cover-up to you? Because it sounds like a cover-up to us! We're going to say it right here at the outset, and we'll return to it later, but Junior better hope there aren't "tapes" or "wire tapps" of his little meeting!

We learn about Daddy Trump signing off on Junior's first lie in the New York Times, which reports that, according to three sources, human grease stain Donald Trump Jr. wanted to come clean about his little Russian meeting this weekend. However, three OTHER sources say nope, he wanted to lie like a common His Dad. Who's right? Three sources! We just don't know which three.

Otherwise, the NYT paints a picture of a White House completely losing its shit. Apparently, Trump aides and lawyers are "engaged in a circular firing squad" over Little Junior's bad behavior, "anonymously blaming one another for the decisions of the last few days." Poor things!

Trump is reportedly upset with his dumb lawyer Marc Kasowitz, and in turn Kasowitz is apparently so tired of Trump's shit he might resign. Trump's legal "experts" are also mad at Jared Kushner, because he "whisper[s] in the president's ear about the Russia investigations," and because he is an "obstacle and a freelancer more concerned about protecting himself than his father-in-law," according to "source." In short, everybody in the White House is kung fu fighting!

Grease Stain Junior cuddled inside the warm bosoms of Sean Hannity on Tuesday night, and attempted to 'splain himself. Shockingly, he came off as A Idiot who REALLY REALLY wanted to do criminal conspiracies with Russia. Here, have an embarrassing video:

Junior told Hannity he didn't think it was a big deal to set up a meeting with Russians promising dirt on Hillary Clinton because number one, he thought it was just "opposition research," and number two, it happened before the the media was obsessed with "Russia-mania." Does Fuckhead not understand he and his family CREATED a lot of the "Russia-mania," by getting in bed with all these Russians? Does Junior think that before that, it was totally normal for campaigns to do conspiracies with Russia to beat their opponents? Jesus fuck, dude. And don't give us this shit about how the Trump family is "new at politics." Are they all NEW AT LIFE? Or are they all so used to being part of a crime family that they have no sense of right and wrong?

Baby Donald said he was so excited about this meeting because he'd been "reading about scandals that were probably under-reporting [sic] for a long time, so maybe it was something that had to do with one of those things." To which Wonkette replies, WHAT SCANDALS, YOU FUCKING CONSPIRACY THEORIST HICK? PIZZAGATE? FOR CHRIST'S SAKE, IS YOUR BRAIN THAT BROKEN?

But none of that should matter, Junior said, because "it was literally just a wasted 20 minutes, which was a shame." See? Junior TRIED to do conspiracies with these Russians, but they didn't put out! What a shame, because he was SO READY.

He did allow that, "in retrospect, I probably would've done things a little differently." YOU THINK?

Junior's grotesque sperm donor got on Twitter to defend his spawn Wednesday morning:

LOL the primary source for this is Junior's Twitter account. You hear that, Don Jr.? You are FAKE MEDIA that is MADE UP and you DO NOT EXIST. Of course, what your dad probably means to say is he wishes you were never born. :(

So, let's flesh out why we say Junior and his daddy better hope there ain't no tapes! They keep saying, "Oh well, nothing came of this meeting, so it's cool, right?" HOW DO WE KNOW THAT'S TRUE? We don't. We have Dipshit Junior saying nothing came of it, which was a "shame," because he had a tent in his panties for doing conspiracies with Russia. We have the Russian lawyer, who says she didn't share any goods. Neither of these sources is particularly trustworthy.

Maybe the meeting was nothing! Veselnitskaya says Jared Kushner left soon after it started, and that Paul Manafort played on his phone the whole time. Perhaps they were bored because they had been through LOTS of Russian conspiracy meetings, and were pissed that the failed fruit of Daddy Trump's First Sperming had wasted their time with this meeting that wasn't a good Russian conspiracy AT ALL!

But maybe it was something! First of all, it's bullshit that Manafort and Kushner didn't know what the meeting was supposed to be about, since they got an email forward from Junior with the subject line “Russia – Clinton – private and confidential.” They didn't read that email chain? PFFFFFT whatever. Maybe this was a really good Russian conspiracy meeting, and everybody is lying about what went down on June 9, 2016.

The point is, fuckers better hope there aren't any tapes! Oh, we don't mean "tapes" like Donald Trump's dumbass lie about Barack Obama doing "wire tapps" to him. We mean normal FISA surveillance of people from enemy nations like Russia, who might have communicated with members of Team Trump about illegal election conspiracies. For instance, Natalia Veselnitskaya, the Russian lawyer. And Rob Goldstone, the hilarious-looking British promoter who represents the Azerbaijani-Russian pop star Emin, who wanted Junior to meet with the Russian lady. Or Aras Agalarov, Emin's Russian oligarch dad, who is buddies with Putin. Any of these people could have been under FISA surveillance, and if they were in contact with members of Trump's inner circle, their voices might have been picked up in routine surveillance too. And the NSA might have unmasked them, because they were overheard DOING CRIMES. (This is why Devin Nunes and Trump are actually so pissed off about the very legal practice of "unmasking." Read more about how that works here!)

It's been reported that, while this particular meeting wasn't on special counsel Robert Mueller's radar before all this, it absolutely is now. So ... what's that thing we've been saying this whole post? Oh yeah, MOTHERFUCKERS BETTER HOPE AIN'T NO TAPES OUT THERE.

(LORDY, we hope there are tapes!)