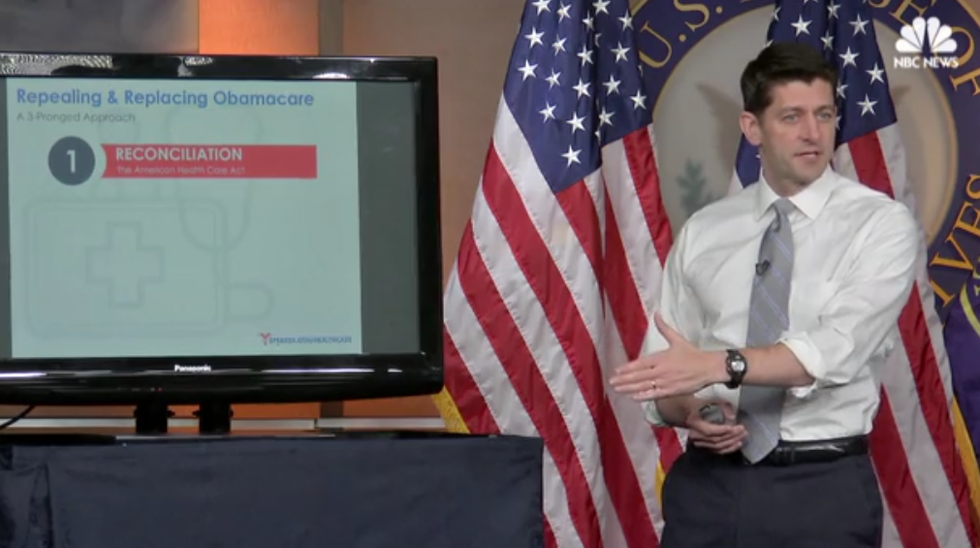 Don't we always tell him he should just stand there and look pretty?

Speaker Paul Ryan used his weekly press conference Thursday to do a PowerPoint presentation on why the shit sandwich of his RyanCare/TrumpCare plan really is delicious, even though literally nobody likes it, not even Republicans.

We know you don't actually want to watch the whole thing, so we'll spare you. But we will highlight an important part, where Ryan, with his sleeves rolled up tryin' to look like that "cool perfesser" who makes jokes and is still young and sometimes has sex with a handful of the best students in the class, shows that he shouldn't be doing a damn PowerPoint on health insurance in the first place, since he obviously doesn't understand how it works:

Ryan: The whole idea of Obamacare is...the people who are healthy pay for the...sick. It's not working, & that's why it's in a death spiral pic.twitter.com/ztTXrn7bpH

The fatal conceit of Obamacare is that we're just gonna MAKE everybody buy our health insurance at the federal government level. Young and healthy people are going to go into the market and pay for the older, sicker people. So the young, healthy person's going to be made to buy healthcare, and they're gonna pay for the person, you know, who gets breast cancer in her 40s, or gets heart disease in his 50s. So take a look at this chart. [LOOK AT IT! - ed.] The red slice here are what I would call people with pre-existing conditions, people who have real healthcare problems. The blue is the rest of the people in the individual market, that's the market where people don't get health insurance with their jobs, or they buy it themselves. The whole idea of Obamacare is the people in the blue side pay for the people on the red side. The people who are healthy pay for the people who are sick. It's not working, and that's why it's in a death spiral.

First of all, Ryan doesn't seem to know what a "pre-existing condition" is -- for example, before Obamacare, the list included everything from diabee-tus to multiple sclerosis to pregnancy, as well as other more severe things, like acne. (No, really. Like acne.) "Pre-existing condition" doesn't always mean "grave illness." Sometimes it's a manageable condition or just a thing that exists!

But Ryan's muddying his point here, because a person who is "healthy" today could become "sick" or develop something known down the road as a "pre-existing condition" tomorrow, and they'll still need coverage. They could get hurt on the job, or come down with a disease! THAT'S. HOW. INSURANCE. FUCKING. WORKS. We all pay in, so we'll all be protected if something happens. Even us healthy folk!

To give an example of how this works, let's say Paul Ryan, satisfied with what a Very Good Job he did in his PowerPoint presentation, decided to head off to the Congressional gym and work out his man body:

He is a very healthy man! He doesn't want to be paying for all those gross sick people, does he? TAKERS!

WELL, after his workout, let's say he goes off to the showers and, during self-exploration time, finds a lump on his left nut. Oh no, what is that lump? Distracted by the lump, he slips and falls on a banana Louie Gohmert was eating in the shower, and he breaks his leg! Uh-oh! Now, just an hour ago, Paul Ryan was a healthy man who wasn't sick. Now he can't walk and he might have a wee spot of nut cancer, ISN'T HE GLAD HE HAS INSURANCE, NOW THAT HE IS ONE OF THE "SICK PEOPLE"?

Of course, this is a bad example, because Paul Ryan gets his insurance from the gub'mint, like a common welfare queen.

Maybe Ryan and the Republicans do understand this, but they're just greedy and do not like sharing. (Just kidding, not maybe, definitely! Read this weird Ayn Rand thing and thank us later!) If that's the case, they need to go back to preschool and let us adults of the non-Randian, non-sociopathic variety handle things until they get educated enough to live in civil society, alongside grown-ass humans whose brains aren't weird.

In summary, fuck you Paul Ryan, right in your healthy, perky bottom.

Wonkette is fully reader-supported by Viewers Like You. If you liked this post, toss us a few dollars, will ya?