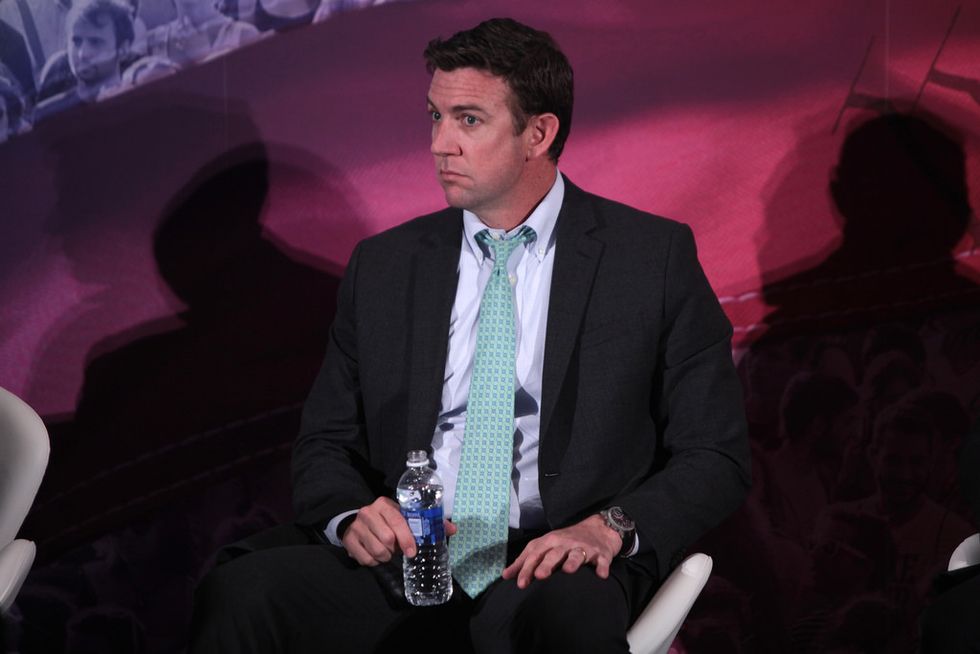 When God closes a door, he opens a window. California Congressman Duncan Hunter knows this, because he is a Christian who loves Trump and hates gaybortions. For instance, Hunter tried to close the door on a Congressional investigation into his campaign finances by voting to gut the Office of Congressional Ethics in January. But then the Lord opened a window and raided Hunter's campaign office in Virginia this March. And Jesus kicked out a few more panes of glass when a federal court employee inadvertently posted the FBI warrant online, and the LA Times published the screenshots yesterday. The Lord does work in mysterious ways!

Hunter first found himself in the FEC's crosshairs in early 2016, when his campaign account disclosed $1,200 of spending on the Steam gaming platform. As Roll Call reports,

After Rep. Hunter saw the charges to Steam later that month, he realized his son was using a campaign card to pay for the gaming service. He contacted the company to cancel the account, but about 50 charges were put on the card between the time the account was closed and Dec. 16.

The campaign then contacted the Federal Elections Commission and the bank, and a fraud alert was put on the card.

UH HUH. So, either Hunter's account was hacked, OR his family was so used to helping themselves to his campaign funds that they racked up $1,200 on video games and tried to hide it by reporting the charges as fraudulent. And we have no way of knowing which one of these it was, but we note that in February of 2017, the FBI was looking for evidence of:

...[A] scheme to defraud First National Bank by making false statements related to video game charges which resulted in the refunding or crediting of charges not properly due from April 4, 2016 to the present in violation of Title 18, United States Code, Section 1334 (bank fraud).

From FBI warrant published in The LA Times

Rep. Duncan Hunter had to pay back $60,000 worth of petty grifting from his campaign funds. He's being eyed for Trump's NSA.

We are also wondering how Hunter's 12-year-old son got the campaign credit card to use for the $49.28 of "real" Steam purchases. Hunter really ought to have a word with his campaign manager Margaret Hunter about that! Maybe tonight he should roll over and say, "Honey, perhaps if we only used the card for legitimate campaign expenses, our three children wouldn't be facing the possibility of BOTH their parents being indicted for bank fraud and violating campaign finance laws."

From FBI warrant published in The LA Times

But we are a not a marriage counselor, so don't go by us.

When the FEC started looking into the Hunter campaign, they found that someone had been using Hunter's campaign credit card A LOT. But as the San Diego Union Tribune reported, it was probably just an honest mistake to charge:

Hunter took out a home equity loan to pay back the $60,000 he accidentally stoled from his campaign. But by then, the FBI was already all over him. They executed the warrant on his campaign office on February 27, 2017, and Hunter debuted his "mileage reimbursement" defense to his constituents two weeks later. The Escondido Grapevine describes "Duncan Duane Hunter's Town Hall from Hell":

“We then payed back another $50,000,” Hunter continued. “That includes everything. We paid back about 130 percent of what my own internal audit came out with. I announced it prior to the election. We’ve been transparent about the whole thing. These were mistakes that were made by my campaign that I paid back immediately.

“I would charge my mileage on my card. Instead of charging on my personal credit card, I would charge it on my campaign card when going to campaign events. The campaign finance stuff, I was not watching close enough. I have fixed it now. It’s all straightened out. I’ve taken responsibility for it. I’ve fixed it. End of story.”

See, he really is doing the government a favor by not getting his mileage reimbursed! Which the FBI probably figured out when they seized all this stuff in February.

Gee, maybe Duncan Hunter is in a wee spot of trouble. If and when Congressman Douchebro goes to jail, we'll all have a chuckle. Because that sumbitch deserves it for sure. But in all seriousness, WHO THE HELL INVOLVES THEIR MIDDLE SCHOOLER IN A FEDERAL CRIME? We are just a heathen Jew, but we are pretty sure having your 12-year-old abet you in a felony is Not What Jesus Would Do!

You are bad, Duncan Hunter. And you should feel BAD.