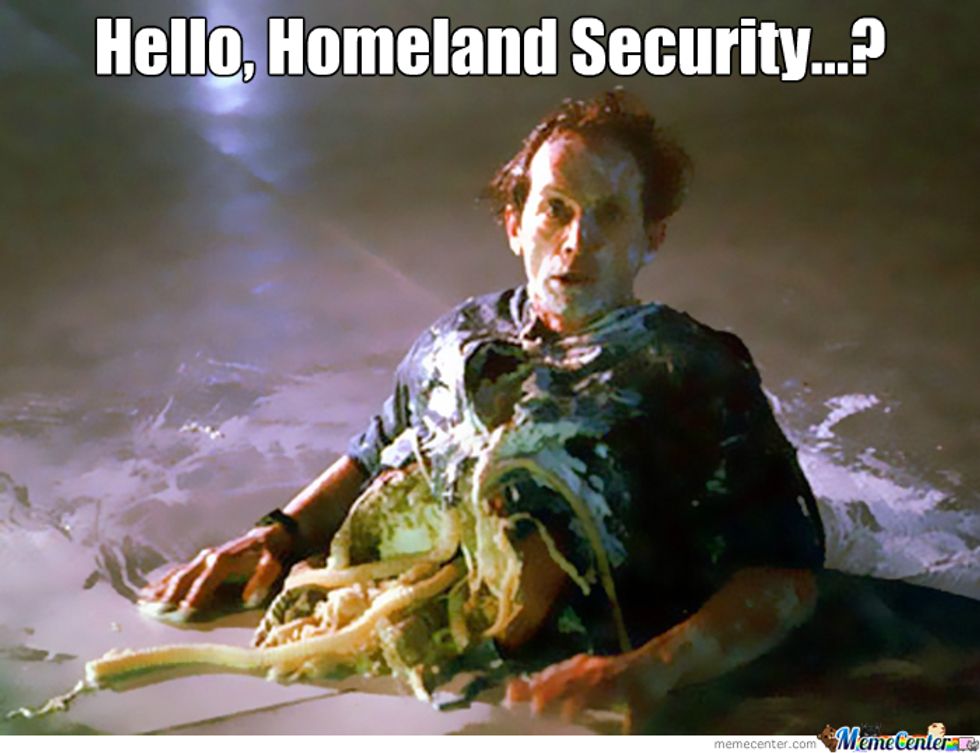 Worse, Weyland-Yutani's health plan says this is a preexisting condition

The Trump administration has actually followed through on one of its stupid promises on immigration, hooray. In addition to the continued actions of the New Cruelty in deporting as many undocumented immigrants as possible and then labeling them criminals (including scary crimers like that learning-disabled DREAMer who left his papers in a friend's car), the exciting new "Victims Of Immigration Crime Engagement" (VOICE) office opened this week. Dedicated to keeping alive the 2016 campaign's strategy of waving the bloody immigration shirt whenever possible, VOICE will release regular reports on crimes committed by undocumented immigrants (no matter how inaccurate such lists may be), and established a hotline where Good Patriotic Americans can report crimes committed by illegal aliens, too. The internet immediately rose to the trolling challenge and started calling the hotline to report abductions by space aliens, suspicions that Clark Kent is responsible for knocking down whole blocks of businesses, and so on. We don't have any firm stats, but we'd bet the hotline logged a few hundred reports of people telling DHS "We have the droids you're looking for."

One of the first calls for mass trolling came from activist Alexander McCoy of the group Common Defense:

And then things, as they do on Twitter, escalated:

Not surprisingly, someone posted this horrifying footage of an actual alien assault in progress:

Which is perhaps a bit unfair, since we happen to know that particular crime victim Fought Back, which is why she's now a national spokesperson for the National Cargo-Loader Power Exoskeleton Association.

Most stories we've seen on the trolling of that VOICE hotline were satisfied to post images of similar Tweets, which certainly demonstrates the boundless creativity of people avoiding work (not that we're complaining, because that's 80% of our readers), but doesn't prove people were actually taking to the phones. Happily, Buzzfeed did some real journamalism and talked to a few folks who put their phones where their Tweets were, like Alexander McCoy, who confirmed via direct message that he had called to report his abduction by a UFO. He was on hold for a good 20 minutes, which certainly suggests a high call volume, and eventually got a human (we'll assume) on the line. Following the call script, the rep asked McCoy if he was "was calling to report a crime committed by an illegal alien":

When McCoy got to his Big Troll, he says, the operator didn't find the joke nearly as hilarious as McCoy did. Actually, McCoy said the operator didn't seem to get the joke, but the response here isn't cluelessness, it's eye-rolling and Following Procedure:

Nonetheless, McCoy is pretty sure he struck a blow for freedom and solidarity with the people being deported by the New Cruelty:

"I think it's powerful to see the response there's been. I think there are a lot of people who have been searching for something they can do to speak out, and I'm glad that so many people are showing solidarity with the immigrant community," he said.

We've got mixed feelings here -- yes, the hotline is a total waste of time and money, and we appreciate and honor the impulse to troll something so stupid. On the other hand, suggesting that this is really going to accomplish much of anything sounds an awful lot like wishful thinking, maybe? Hard to say. We can certainly hope that if the managers of the hotline realize the vast majority of the calls they get are trolling, with very few real crimes being reported, then maybe they'll abandon the effort? That would be nice, but it doesn't sound like a Trump administration move; the Law-N-Order bunch seems more likely to trace calls and start prosecuting trolls for making false reports. Still, we appreciate the sentiment of this caller:

Lots of people reported long wait times, so the trolling is definitely tying up the lines, but Immigration and Customs Enforcement isn't impressed; they're going with the predictable "what a shame these people are wasting important government resources" line."

"There are certainly more constructive ways to make one’s opinions heard than to prevent legitimate victims of crime from receiving the information and resources they seek because the lines are tied up by hoax callers," an ICE spokesperson said.

"We will adjust resources, if necessary, to ensure that the victims for whom this office and hotline is intended get the info and resources they need."

So they'll add phone lines, get more call center staff, and spend more money on this dumb project than it's already getting, or add measures to discourage trolling. We laughed, then we thought about it some, and now we think maybe, just maybe, activism by trolling may not do much good here, however emotionally satisfying it might be. Go to a march. Call your representative and senators again. Trolling? Boy, I don't know.

Or maybe if it ties up the lines and keeps some idiot from calling to insist the Latino family down the street needs to be deported immediately, it's a genius idea. Discuss amongst yourselves.

Yr Wonkette is supported by reader donations! Please click the "Donate" clicky below if you like thoughtful ambivalence.