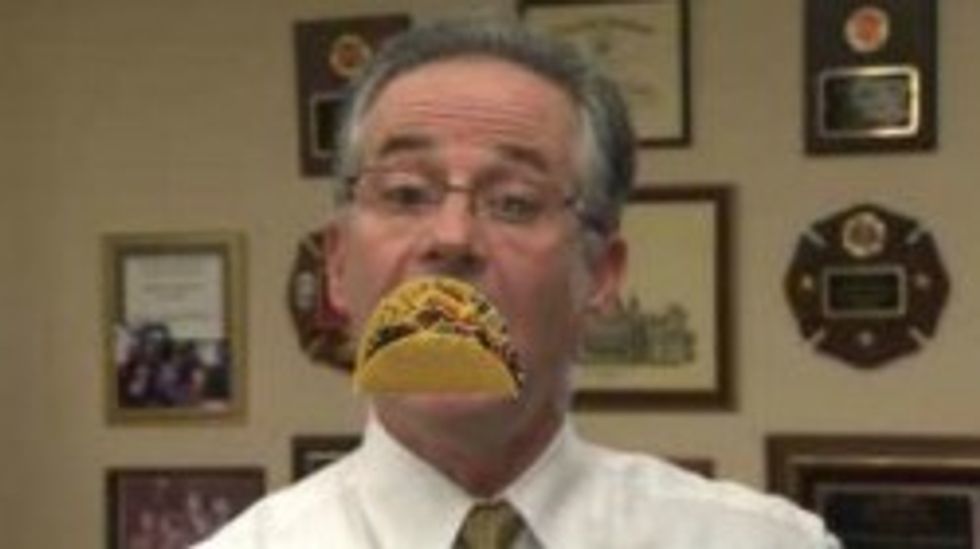 Four East Haven, Connecticut police officers were recently arrested by the FBI for unlawful abuse and search of some of the city's Latino residents, but Mayor Joe Maturo's immediate response to the arrests was so heinous as to suggest that maybe the officers had been told to be racist and abusive by a racist and abuse-loving mastermind who barely won the election that put him in his current position. When asked, following the arrests, what he would do to promote Latino outreach, Maturo said, "I might have tacos when I get home." Well played, powerful Republican man.

New York station WPIX, who conducted the interview in which Maturo made the remarks, also got a response from Connecticut Governor Dan Malloy, who said Maturo's words were "repugnant" and "represent either a horrible lack of judgment or worse, an underlying insensitivity to our Latino community that is unacceptable."

Maturo later retracted with what amounts to A QUARTER OF an apology, saying his remarks have only given his opponents fodder:

It was stupid, it was insensitive and I gave my detractors... a reason to make matters worse with a 'gotcha' and an insensitive and stupid answer to something I should have never said.

Then he apologized by another, well, half, maybe. But whatever, because in the original WPIX interview, conducted by reporter Marco Diaz, Maturo also said he "didn't get [Diaz's] point" when Diaz asked him why there is only one Spanish-speaking police officer in East Haven's 50-strong force (East Haven also has a large Latino population).

Also, hmm, what is the point of elections if someone this diabolical is allowed to run a city just because he beat his Democratic opponent by 34 votes? Thir. Tee. Four. Votes. [USA Today/Connecticut Post]