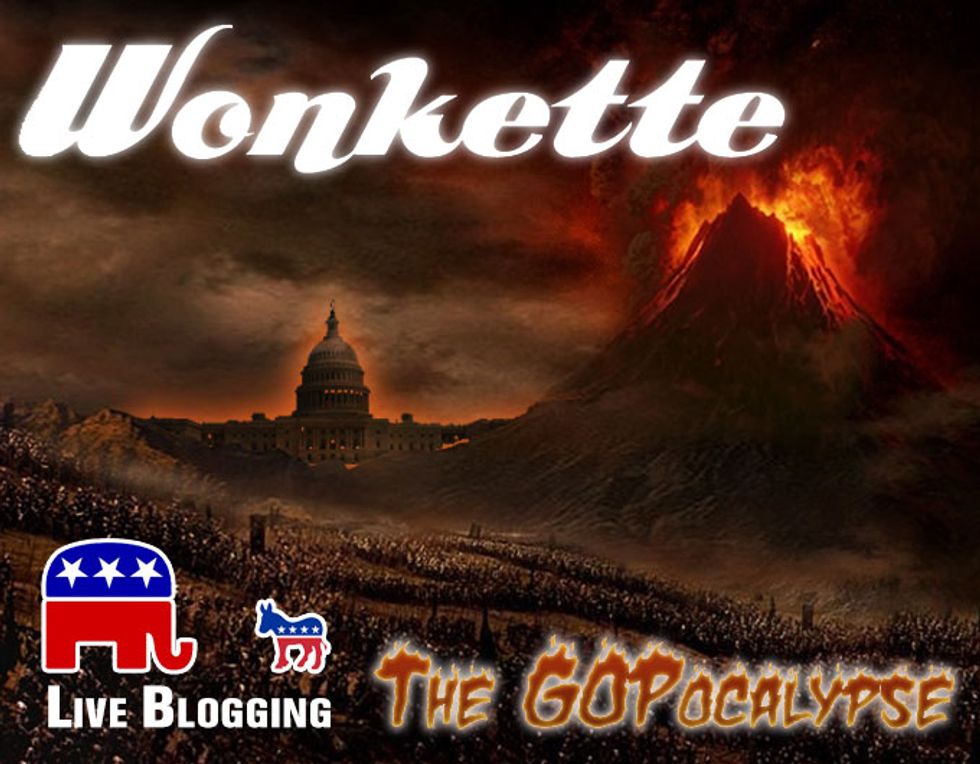 So we had an election today? With the voting? (Or the vote frauding, if you are a Democrat.) The bad news is that a whole lotta Republicans are probably going to win a whole lotta races and do a whole lotta damage to this, our United States of Jesus Thomas Jefferson. Or maybe they will just shut down the whole government and call it a day. Here, this delicious Lemon and Rosemary Gin Fizz For All Your Election Day Sorrow-Drowning might help.

The first polls close at 6 PM Eastern, and ... oh, look at that, it's six o'clock now! Why are the polls closing at 6 in parts of Kentucky and Indiana? How will people vote after work? Hahaha, just kidding, they are Red States, no one works!

Oh hey, look it is Mitch McConnell! Will he stave off a challenge from that lady who yelled at him that one time? And if he does -- IF -- will he be the Senate Majority Leader? No, of course not, Ted Cruz will put him in a blender and spoonfeed McConnell puree to his jerkbaby.

You know what? We're gonna be spending a LOT of time together tonight. We might as well spend some of it watching that again.

Who's that guy behind Mitch McConnell? (It is Ted Cruz.)

6:15 p.m. -- Gary Legum, our MSNBC (-watching) correspondent with an important update: "Al Sharpton is so skinny he looks like a sperm." Do you have important updates for us? Send them to tips at wonkette dot com through your internet mailing machine!

According to CNN's exit polls, President Bamz gonna git a THUMPIN', because nobody likes him and the country is waaah. Gas prices super low? The deficit cut by a number of math? The stock market rad? Unemployment half of what it was? Well, sorry, PRESIDENT LOSERMAN, one million percent of the country thinks we are in a very cozy handbasket to that place you can't say the name of in front of old Southern ladies. Let's make some bullet points!

Yup! Sounds like the Dems should get a shellacking all right! (Because Americans are very stupid.)

6:35 p.m. -- So, serious question. If the GOP takes the Senate, and it's not even a 50-50 Old Handsome Joe Biden tie, how long does the filibuster survive? The smart money is on "three-point-five days."

6:40 p.m. -- ACHTUNG! DRUDGE SIREN! EVERYBODY SHUT THE FUCK UP WE GOT US A SCANDAL! Fox contributor Michael Barone is TWEETING OUT EXIT POLL RESULTS for New Hampshire, and that is against the law of exit polls!

It is not hard to remember to not tweet exit polls before the polls close (because election integrity argle bargle whatever, you remember), DICK. Somebody arrest Michael Barone, and then Fox New, pls ok thx.

6:45 p.m. -- You wanna hear something REALLY scary? How about Jim Inhofe as chair of the Senate Environment and Public Works committee? And less frankly dumb and stupid but more frighteningly erratic, mercurial, and likely to scream at people that they are a cunt is John McCain as chair of Armed Services. BOO!

6:58 p.m. -- Hey remember when the polls closed at 8 p.m. in California that time in 2008, and at 8:01 all the networks called it for Prezzy Ohezzy? That was fun. We are going to be sitting here for DAYS you guys. But in Indiana, South Carolina, Georgia, Vermont, Kentucky and Florida, the polls are about to close! (We think. We might have misheard Fox on some of those. New Hampshire? Maybe? Unclear.) And then we will get no information FOR EVER. Let's play a game! Let's play "find Rebecca an example of what John Thune will actually DO as chair of the Science committee, because that guy -- THOUGH VERY HANDSOME -- really knows how to fly under the lunatic radar, and send it to her at tips at wonkette dot com!" Doesn't that sound like a fun game? I mean, I gather he's no Inhofe, but a girl can dream!

7:05 p.m. -- Fox calls all the races in the universe for the GOP, except for Virginia and Georgia that are too close to call. Tim Scott, South Carolina's junior senator, will "vanquish" his Democratic opponent, says Megyn Kelly, who then laughs at whatever dumb idiot wrote her copy, for writing copy like that, which is very bad copy. Seriously, "vanquish"? That guy writes Hobbit fanfiction.

7:22 p.m. -- Charles Krauthammer is on the Fox "News," sexplaining (because he is sexy) that Obama is not your typical liberal, oh no, he is something MUCH MORE DEVASTATING, with the healthcare (first proposed by Teddy Roosevelt) and the cap and trade (first proposed by the George H. W. Bush administration, and championed by Newt Gingrich). No no no, Obama is no mere "liberal." He is far more dangerous than that, with his outlandish tyrannical ideas that were invented by Republicans.

That's fine, whatever, don't care that much except Rick Scott is SUPER GROSS, but it does allow us to post this picture, in a parking garage, from the Charlotte DNC in 2012, when we were accidentally on acid:

"Holy shit!" I said, "It's Charlie Crist!" He stopped for a picture, and as his annoyed and annoying handlers pulled him away, I am not even kidding, he goes, "And may I say, 'holy s' to you too!" Not even kidding, he totally said that.

7:35 p.m. Oh here is a story about Senate Catlady Mitch McConnell! It is by one of the Dans, probably, no way to tell.