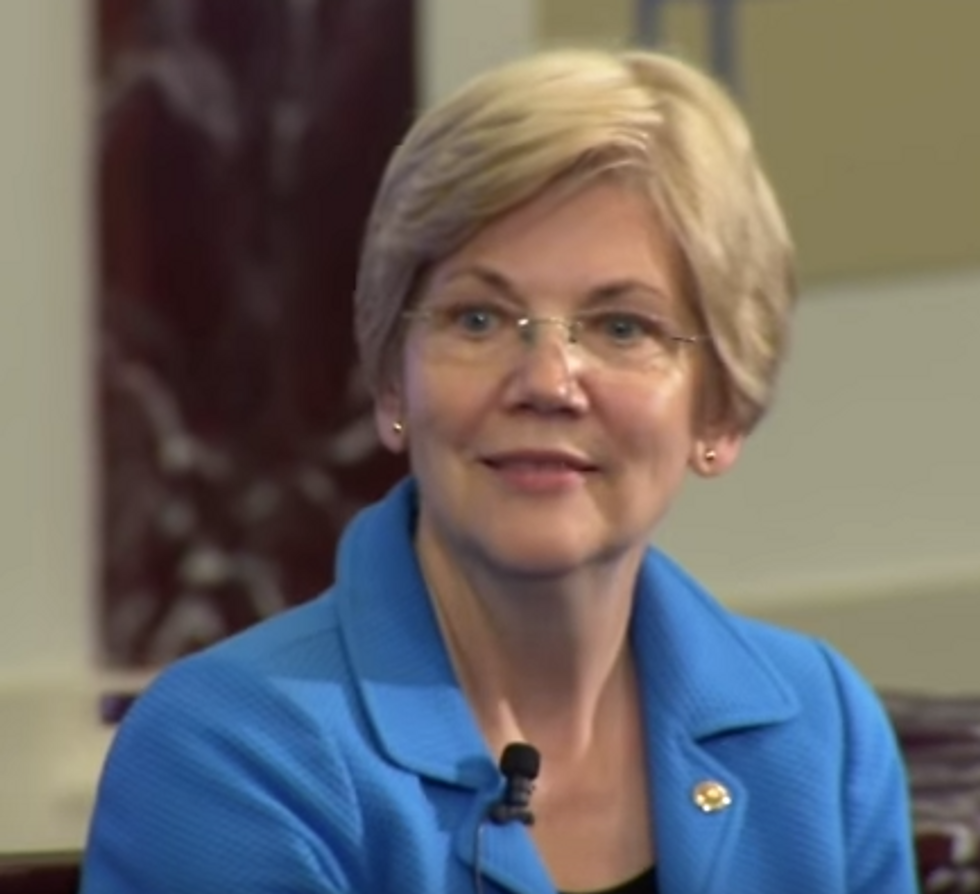 No, Warren isn't going to kick Donald Duck in the yarbles. And it's not 1943, either.

Excellent news! While Ted Cruz is yammering on about things that will never happen (filing your taxes on a postcard and abolishing the IRS), Sen. Elizabeth Warren, Bernie Sanders, and six other cosponsors have introduced a tax simplification bill that actually could work to make the annual rite of putting off your taxes a good bit less painful, and also cut down on some tax-preparation companies' predatory practices. Needless to say, since the proposal would reduce the obscene amounts of money tax-prep places make off people who need professional tax preparation the least, it's virtually certain to be lobbied to death. Unless of course the Senate goes back to the Democrats in the next election, maybe!

Here's the skinny: The IRS already has most people's income data, since employers have to send the information on W2s to them anyway. So instead of requiring people to fill out their own 1040s every year, Warren's bill would give people with simple tax situations (like pretty much everyone currently filing a 1040-EZ)

the option not to complete a tax return at all, but to instead receive a pre-prepared return from the IRS with their liability or refund already calculated for them. The IRS already gets most employer and bank information on taxpayers’ obligations -- such as W2s and interest earned -- so all it would have to do is calculate what they would owe for them.

Then, if you agree the IRS added everything up right, you sign the damn thing and send it back, no need to pay someone to do your taxes for you out of fear that you added stuff wrong. Warren's office released a report on the tax prep industry showing that between 8 million and 60 million households would no longer have to file a return if the IRS did their taxes for them. Such a system could save Americans about $2 billion as well as 225 million hours a year preparing their taxes.

The bill also would direct the IRS to develop a free, online service for people with more complex tax situations to prepare their taxes, rather than having them go to private companies; it would also mandate the IRS let people download income and tax information the IRS has collected from their employers and banks. This would save people a buttload of money and time:

Warren’s report estimates that taxpayers will pay $200 to a tax preparation service this year, on average, and spend 13 hours preparing and filing their returns. That cost eats up nearly 10 percent of the average federal refund.

As the situation stands now, thanks to lobbying from the tax prep industry, the IRS has signed agreements with tax preparers that it will not develop a public-access tax preparation and filing service. Warren's bill would reverse that.

The IRS launched a "Free File" program in 2003 that was supposed to allow about 70 percent of taxpayers to use their choice of private online services to file their taxes online at no cost; roughly 5 million people used such services in 2005. But then the tax prep industry started pushing for changes that disqualified 40 million people from the free services; in 2012, only 3 percent of taxpayers were using Free File.

In 2014, more than half of all the individual tax returns filed with the IRS were prepared by tax professionals, while about 80 percent of taxpayers rely on a preparer or software to file. Every taxpayer who needs assistance represents a profit opportunity. “The tax preparation industry relies on a complicated tax code to charge consumers high fees, and thus opposes simplification efforts -- particularly those that make it easier to file returns,” Warren’s staff report notes.

And of course, some of the scammier places also offer high-interest "refund loans" where they not only charge people through the nose to do very simple math, but then generously offer an "instant" refund -- with a big chunk of the refund taken out as interest and fees. (Last year when we e-filed, the IRS direct-deposited our refund within a few days; no extra charges.)

Warren and Sanders's bill is a terrific idea, even if it's pretty much doomed to be lobbied to death. It's the kind of thing that government could obviously do more cheaply, but since everyone KNOWS government never does anything right or cheaply, it'll never happen. It already faces huge opposition from the tax prep lobby, which depends on tax forms' complexity:

As far back as 1998, Intuit’s SEC filings indicated that simpler taxes could “reduce demand” for their services, something it has continually brought up in filings since then. In its most recent statement, it warned investors that the development of government tax return systems “may cause us to lose customers and revenue.” Liberty Tax Service explicitly said in its 2015 filing that “demand for our products is related to the complexity of tax return preparation,” saying that government initiatives that would make things simpler “may decrease demand for our services or financial products.” And Jackson Hewitt has regularly cited government programs to simplify tax returns as a fundamental threat to its business model.

Imagine that! The answer, of course, is to keep taxes difficult so people will pay to have their taxes done. Plus, there's the inherent hatred of the IRS; the tax prep lobby's ads will almost write themselves. (Hell, they can re-use the scary Fiberglas Uncle Sam head from the anti-Obamacare ads.)

"No one trusts the IRS. But now socialists Elizabeth Warren and Bernie Sanders want to let the IRS do your taxes for you. Stop the madness: call Congress and tell them to keep the IRS's hands off YOUR MONEY!"

Because after all, your money really belongs to Intuit, H & R Block, Jackson-Hewitt, and the corner store with the idiot teen in the Statue of Liberty costume waving the "INSTANT REFUND" sign during rush hour.