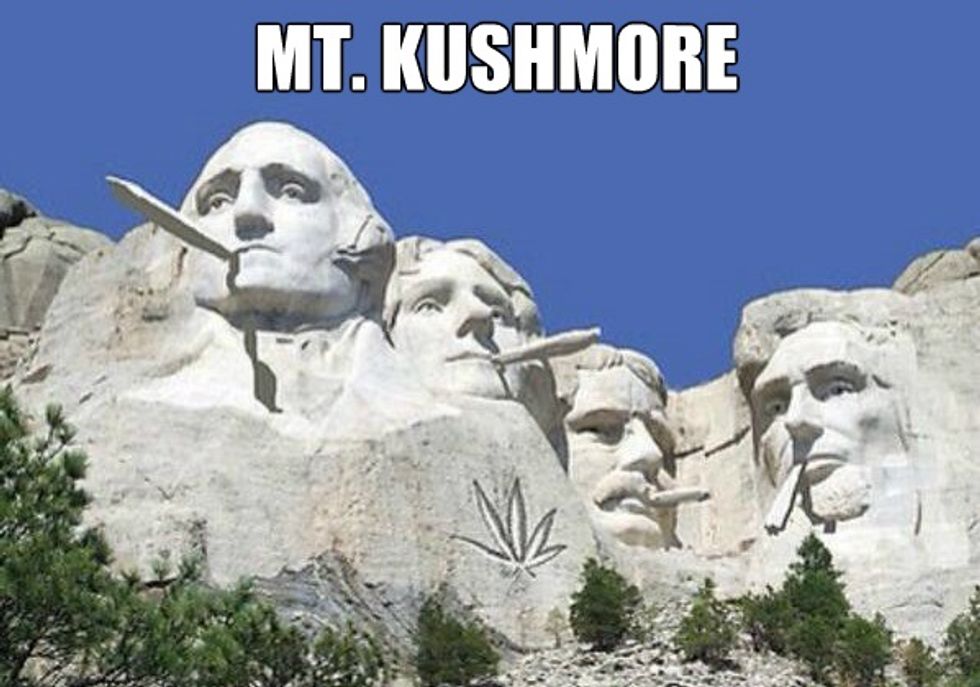 Did you ever think Cary Grant was running all over the top of your head, man?

Just in time for summertime election season, two big important US senators are introducing yet another bipartisan national weed bill, although this one isn't out to legalize weed nationwide. Instead, Massachusetts Democrat Elizabeth Warren and Colorado Republican Cory Gardner have a more modest goal -- protect states that have already legalized marijuana from interference from federal law enforcement. It's a pretty important goal, since Jeff Sessions is so worried about the enormous weed-legalization crime wave that only he can see.

The bill is designed to appeal both to fans of recreational and medical marijuana and, as suggested by the not-at-all unwieldy title "Strengthening the Tenth Amendment Through Entrusting States" (STATES) Act, to fans of states' rights. And by golly, just to demonstrate that Democrats and Republicans can come together for the good of everyone, the two top sponsors are each are framing the argument for the bill to appeal to their constituencies:

Warren called federal laws treating marijuana as a Schedule 1 controlled substance "archaic," because they not only hurt individuals, they also

prevent businesses who are in the marijuana business from getting access to banking services. That forces a multibillion dollar industry to operate all in cash. That’s bad for business and bad for safety.

Warren and Gardner are pushing hard on the bipartisan optics of the bill. In addition to getting both parties as sponsors, there's also a bipartisan version of the bill in the House.

Warren quipped they were “lining them up like Noah’s Ark” — one Democrat for each Republican.

To protect his state (and its groovy new revenue stream) from Jeff Sessions's weird insistence that the federal government needs to crack down on legal weed, Gardner placed holds on several Justice department nominees until Donald Trump promised to lay off Colorado.

In a presser on the bill Thursday, Warren emphasized points your average hippy-dippy liberal cares about, like compassion and science and justice stuff:

“The science is clear -- medical marijuana treatments are effective [...] There is absolutely no reason that patients should be prevented from seeking scientifically approved care.”

Warren also stressed the discriminatory enforcement of marijuana laws in communities of color.

“We cannot talk about our country’s approach to marijuana policy without addressing the widespread discrimination these policies foster within our criminal justice system — discrimination that has devastated communities of color for generations,” Warren said.

While the Warren-Gardner bill doesn't specifically include measures to redress the lopsided enforcement of marijuana laws -- whites and people of color use weed at identical rates, but blacks are almost four times more likely to be arrested -- a broader weed legalization bill in the Senate, introduced by Democrat Cory Booker, would not only legalize pot nationwide but also allow people convicted of marijuana offenses to apply to have their records expunged. It would also include incentives for state and local governments to redress pot laws where they disproportionately affect people of color. As plenty of observers have already noted, low enforcement rates have already effectively legalized weed for most white people.

Just to underline that point, the Minneapolis Police Department announced yesterday that it was immediately ending the practice of sting operations against small-time weed dealers in the city, because oopsies, somebody went and noticed that only black people were being targeted. Out of 47 arrests in the stings, all but one of the people arrested were black. Can't imagine how that could have happened. The police, of course, insisted they weren't profiling anyone at all, oh, heavens no!

The sales mostly involved very small amounts, just one to two grams, sold for between 10 and 20 dollars, and were all charged as felonies. While some of the sellers were sent to diversion programs, others were convicted, with at least one man going to prison. The county's chief public defender, Mary Moriarty, brought the racial disparity in arrests to the attention of Minneapolis Mayor Jacob Frey last week, and he promised to put an end to the stings.

"Approaching black men and women who are low income and homeless and then having the county attorney charge them with felony drug sales makes me very angry and disappointed," Moriarty said in an interview Thursday.

Frey issued a statement saying he thinks marijuana "should be a lowest-level enforcement priority," and called for the full legalization in Minnesota, not least because of the racial disparities in enforcement. Well, yes, but the how would police just randomly harass black people in the name of "quality of life" in the downtown area?